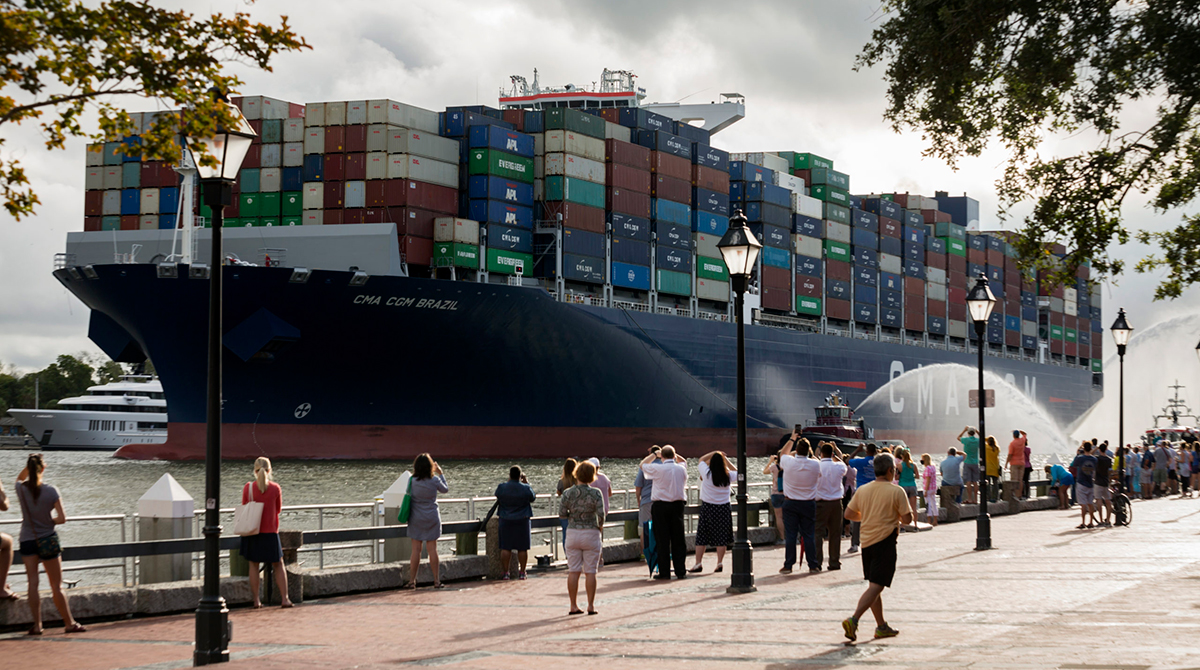 CMA CGM Brazil, among the largest ships to ever call at the U.S. East Coast, sails upriver to the Port of Savannah Garden City Terminal on Sept. 18. (Stephen B. Morton/Georgia Ports Authority)

The increase was driven by imports, which eclipsed 500,000 TEUs for the first time.

“In May we saw our lowest container volumes in more than a decade,” said Gene Seroka, executive director at the Port of Los Angeles. “Since then, there has been a significant replenishment of warehouse inventories. Coupled with retailers planning for consumer holiday spending, it has created a surge of imports.”

The Port of Los Angeles processed 961,833 Twenty-Foot Equivalent Units (TEUs) in August, the first monthly cargo increase in a year. The 12% gain in cargo was driven by imports, which eclipsed 500,000 TEUs for the first time. https://t.co/Na3UjXmEu3 pic.twitter.com/xzAYRMTZUC — Port of Los Angeles (@PortofLA) September 15, 2020

However, the coronavirus pandemic that struck the United States in March — just behind scheduled factory closures in China for New Year’s celebrations — caused an 11.7% drop in year-to-date cargo volume.

But port officials are cautious.

Port of Oakland officials viewed the small gain as encouraging because August represented a turnaround, especially when it comes to imports. Imports rose for the third straight month, jumping 9%.

As peak holiday season gets underway, port officials were hopeful. Aside from retail goods, also pushing cargo volume up was an increase in medical supplies as hospitals and clinics restocked protective equipment.

The Northwest Seaport Alliance, which operates in Seattle and Tacoma, was the only West Coast port not to report a year-over-year increase, despite imports surging to a yearly high.

The complex experienced 58 blank sailings through August — equal to all of 2019 — officials said.

On Sept. 18, the port welcomed the CMA CGM Brazil, one of the largest ships with a capacity of 15,072 TEUs.

The South Carolina Ports Authority, which operates the Port of Charleston, reported its two container terminals saw a 10.4% decline year-over-year in August. It processed 208,837 TEUs, compared with 233,110 a year ago. Despite the decrease, when measured against last August, port officials were optimistic.

In the Gulf of Mexico, Port of Houston reported a 4% year-over-year decline in August as it processed 248,630 TEUs, compared with 259,110 a year ago. Still, port officials are hopeful.

“We’ve seen a large number of extra loaders this peak season as retailers in our region replenish inventories, and those extra loaders have helped balance the impact of blank sailings,” said Roger Guenther, executive director at Port of Houston.