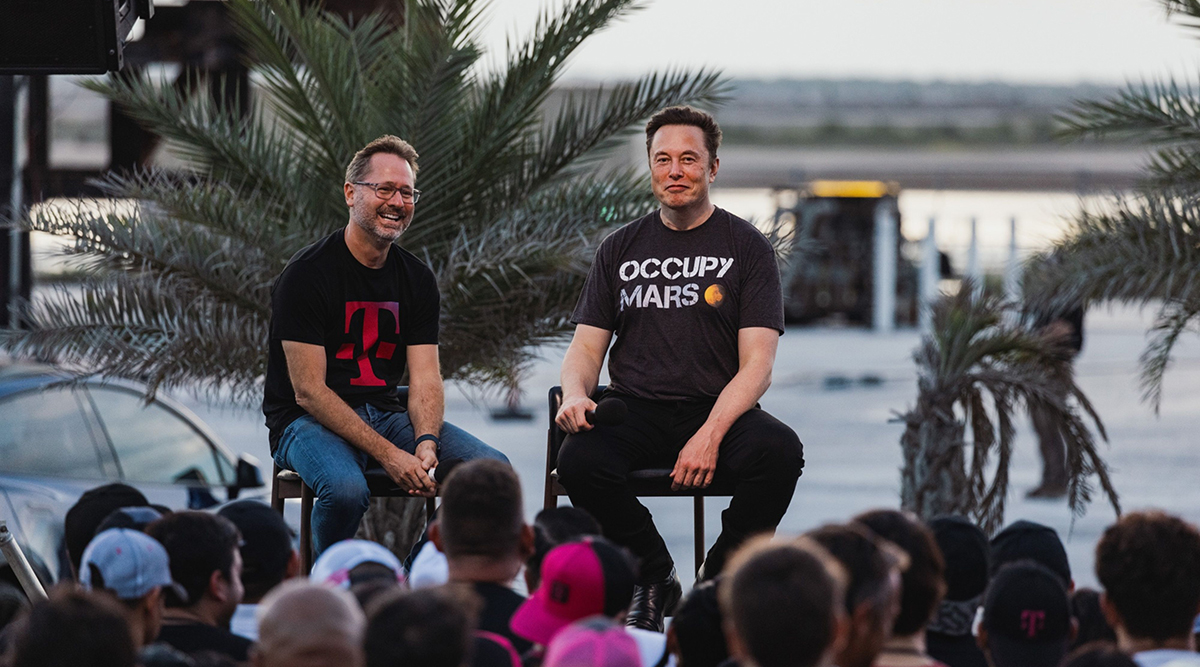 Elon Musk, co-founder and CEO of SpaceX and Tesla Inc., right, with Mike Sievert, president and CEO of T-Mobile US Inc., during a news conference at the SpaceX Starbase facility in Boca Chica, Texas. (Jordan Vonderhaar/Bloomberg News)

Elon Musk oversaw the creation of a 2016 video that exaggerated the abilities of Tesla Inc.’s driver-assistance system Autopilot, even dictating the opening text that claimed the company’s car drove itself, according to internal emails viewed by Bloomberg.

Musk wrote to Tesla’s Autopilot team after 2 a.m. California time in October 2016 to emphasize the importance of a demonstration drive to promote the system, which the CEO made a splashy announcement about a week later. In an Oct. 19 call with reporters and blog post, Tesla said that all its cars from that day forward would ship with the hardware necessary for full self-driving capability.

“Just want to be absolutely clear that everyone’s top priority is achieving an amazing Autopilot demo drive,” Musk said in the email. “Since this is a demo, it is fine to hardcode some of it, since we will backfill with production code later in an OTA update,” he wrote, referring to using temporary code and updating it later using an over-the-air software update.

“I will be telling the world that this is what the car ‘will’ be able to do,” Musk continued, “not that it can do this upon receipt.”

The email sheds light on Musk’s mindset before he and Tesla then made claims about capabilities that have yet to materialize more than six years later. After cycling through several different iterations of hardware, the company to this day tells customers using Autopilot and the system it markets as Full Self-Driving to keep their hands on the wheel and be prepared to take over at any moment.

In October, Bloomberg News reported that prosecutors in the U.S. Justice Department’s Washington and San Francisco offices and investigators at the Securities and Exchange Commission were probing whether the company made misleading statements about its vehicles’ automated driving capabilities.

Musk and Tesla — which disbanded its media relations department roughly three years ago — didn’t respond to requests for comment.

Under the subject line “The Absolute Priority,” Musk wrote in his Oct. 11, 2016, email that he had canceled his obligations for the upcoming weekend to work with the Autopilot team on both Saturday and Sunday. He said everyone would be required to write a daily log of what they did to contribute to the success of the demo, and that he would read them personally.

Nine days later, after Tesla staffers shared a fourth version of the video, Musk replied that there were still too many jump cuts, and that the demo footage “needs to feel like one continuous take.”

While Musk had written in the earlier email that he would be clear Tesla was demonstrating what its cars would be able to do in the future, he then instructed staffers to open the video with a black screen and three sentences referring to the present.

The almost 4-minute-long video that Musk shared in a tweet later that day opens with the text he asked for: “The person in the driver’s seat is only there for legal reasons. He is not doing anything. The car is driving itself.”

Seconds later, an engineer hops into the vehicle — a Model X — and the Rolling Stones’ “Paint It Black” begins to play. The engineer keeps his hands off the steering wheel as the car pulls forward from a driveway, turns left and travels to Tesla’s former headquarters in Palo Alto, Calif. The engineer steps out of the vehicle, the driver-side door appears to shut itself, and the vehicle parallel parks in a space with no one at the wheel.

Tesla drives itself (no human input at all) thru urban streets to highway to streets, then finds a parking spot https://t.co/V2T7KGMPBo — Elon Musk (@elonmusk) October 20, 2016

The video, which remains on Tesla’s website, is of interest to attorneys in several lawsuits related to Autopilot crashes, including one involving the family of Walter Huang, the late Apple Inc. employee who died in a crash while using Autopilot in his Model X in March 2018. Lawyers for the family members who sued Tesla in May 2019 asked Ashok Elluswamy, the current director of Autopilot software, during a deposition in June last year whether the video accurately reflected the capabilities of Autopilot at the time of its release.

Reuters was first to report on the deposition earlier in January. Elluswamy declined to comment.

Tesla and Musk didn’t disclose when releasing the video that engineers had created a three-dimensional digital map for the route the Model X took, Elluswamy said during his deposition. Musk said years after the demo that the company doesn’t rely on high-definition maps for automated driving systems, and argued systems that do are less able to adapt to their surroundings.

The mapping detail — along with Elluswamy’s acknowledgment that the car was involved in an accident during the demo — broadly confirm a December 2021 New York Times report that said Tesla’s video didn’t provide a full picture of how the vehicle operated during the filming. 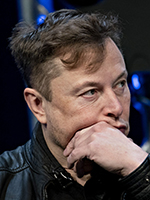 When asked if the Tesla drove up over a curb, through bushes and hit a fence, Elluswamy replied: “I’m not so sure about the curb or the bush. I do know about the fence.”

Last year, the National Highway Traffic Safety Administration began publicly releasing data on crashes involving automated driver-assistance systems, which the agency ordered automakers to self-report. While Tesla reported the vast majority of such collisions, the regulator cautioned that the data was too limited to draw any conclusions about safety.

NHTSA has two active investigations into whether Autopilot is defective. The agency upgraded the first — focused on how Tesla Autopilot handles crash scenes with first-responder vehicles — in June of last year. It initiated the other probe — pertaining to sudden braking — four months earlier.

In August, California’s Department of Motor Vehicles accused Tesla of misleading consumers about its driver-assistance systems. The following month, a customer in the state accused the company of deceptive marketing and sought class-action status for other car owners to join his suit.

“Mere failure to realize a long-term, aspirational goal is not fraud,” Tesla said in a Nov. 28 motion to dismiss the California customer’s complaint.

Musk has said Tesla’s ability to make its cars self-driving will determine whether the company is worth “a lot of money and being worth basically zero.” During a Twitter Spaces conversation last month, he said the company has a leg up over other automakers in this regard.

“Something that Tesla possesses that other automakers do not is that the car is upgradeable to autonomy,” Musk said. “That’s something that no other car company can do.”