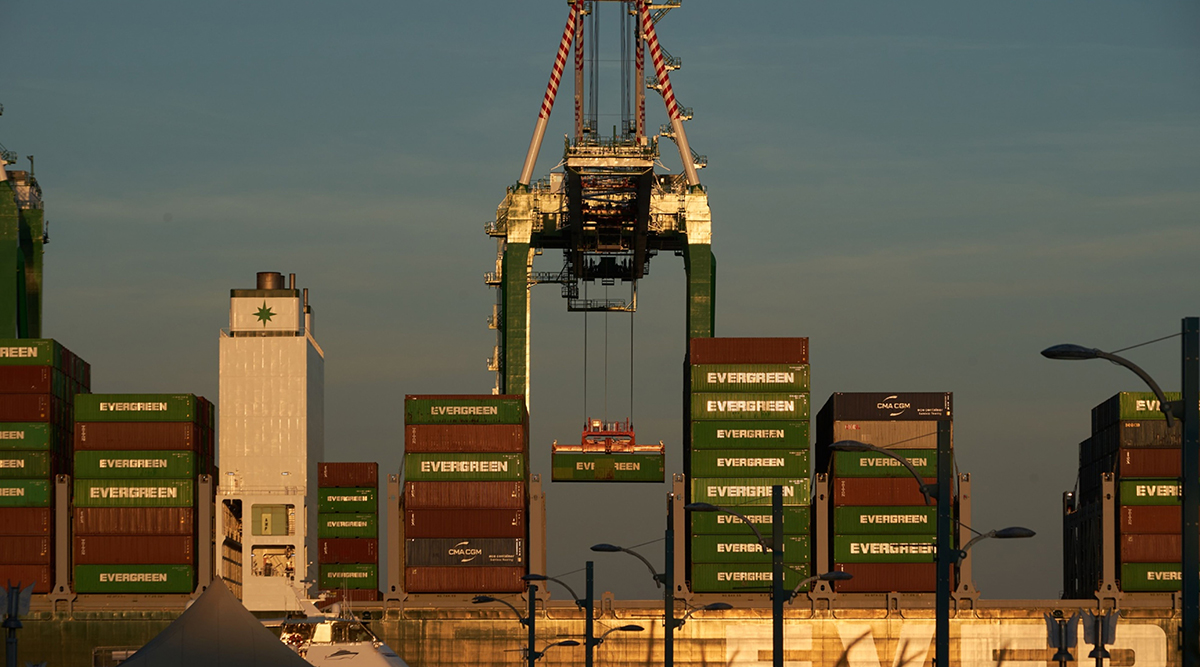 A gantry crane moves a shipping container onboard a cargo ship at the Port of Los Angeles. (Bing Guan/Bloomberg News)

A year ago in early January, a record 109 containerships carrying U.S. imports surrounded the twin ports of Los Angeles and Long Beach, Calif. — a bottleneck so long that the payloads of all those metal boxes lined up end-to-end would have stretched from the Baja Peninsula to Vancouver.

“It was like taking 10 lanes of LA freeway traffic and squeezing them into five,” Port of Los Angeles Executive Director Gene Seroka said in an interview.

As of today, the queue is gone. So why did it take most of 2022 to clear the backlog of ocean freight and where are those containers now?

The answers reflect the changing economic tide — from a pandemic recovery led by resilient consumers and fully stocked warehouses, to a slowdown marked by inflation worries, deep discounting to clear inventories and post-lockdown demand shifting to services, such as travel, from goods.

There were labor supply factors, too. Early in the pandemic port workers, like everyone else, were hit by COVID-19 infections and contact tracing. Now, West Coast dockworkers are locked in contract negotiations with shipping companies, creating uncertainty that is diverting imports to the Gulf and East coasts.

Seroka, who expects a labor deal to be reached early this year, said the ports will probably get back to their traditional “cadence” following the Chinese Lunar New Year starting later in January or sometime in the second quarter.

Here are several charts showing how the gears of the economy, way out of sync with the global trading system just 12 months ago, have returned close to normal: 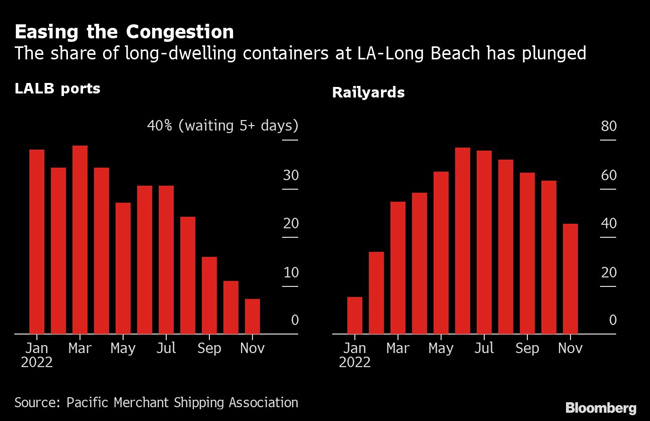 Before the pandemic, few people would’ve included container dwell times at the Los Angeles-Long Beach port complex on their must-watch economic dashboards. But the obscure indicator measuring how long containers sat on port property or at a nearby railyard became something even the White House monitored for signs of progress in clearing the logjam.

“The cargo is meant to come through the port as a transit facility and not as a warehouse,” Seroka said, citing the faster speed of processing containers at the port as a key to easing the backlog. The latest readings show considerable improvement. 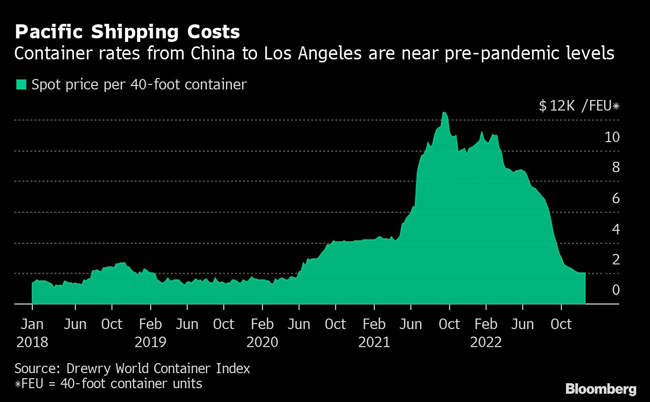 Another gauge of port activity was the cost to ship a 40-foot container from Asia to the U.S. Once going for $1,200 — rendering transport costs negligible as part of overall production costs — some spot rates increased tenfold in 2021 before declining steadily in the past year to levels that are close to their pre-pandemic averages. 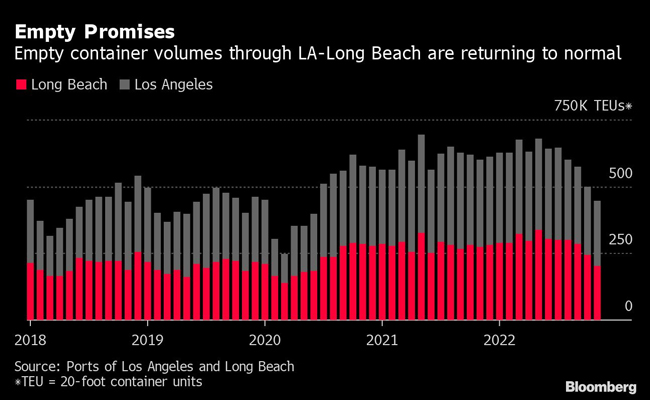 Container rates skyrocketed globally partly because the shipping lines were so eager to send them back to Asia empty from the U.S. because the transpacific eastbound rates were so lucrative, effectively tying up capacity that might been deployed elsewhere. At last count in November, the number of empty containers handled by LA-Long Beach had returned to levels seen from 2018 to 2020. 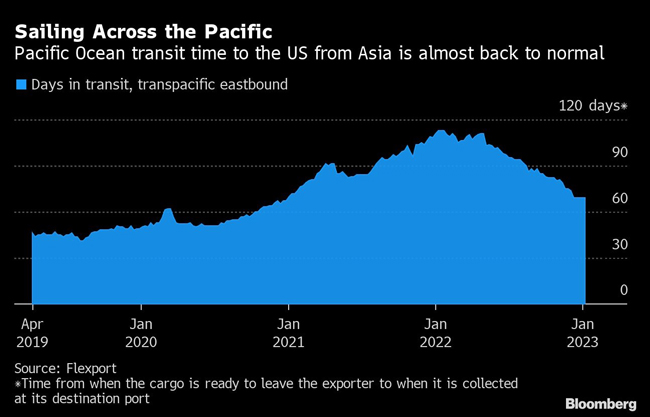 The flow of seaborne trade has room to improve even more, particularly given China is still grappling with virus outbreaks. According to Flexport Inc.’s latest ocean timeliness indicator, the time it takes for cargo to leave an exporter in Asia to reach its destination port fell to 69 days as of Sunday. That’s down from a peak of 113 days in January 2022, but it’s still about two weeks longer than the journey took in January 2020. 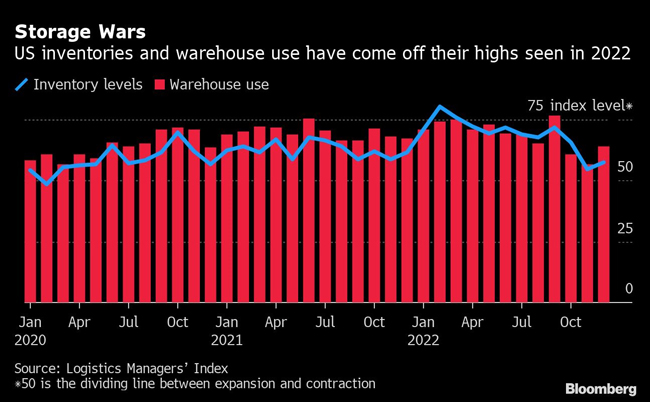 All those goods moving around had to go somewhere, and indeed warehouses were filled to capacity. But 2022 ended with both inventory levels and warehouse use showing signs of softening, according to the Logistics Managers’ Index. The latest LMI report released in early January said “after the wild swings seen from 2020-2022, the logistics industry may be moving back towards a bit more predictability.” 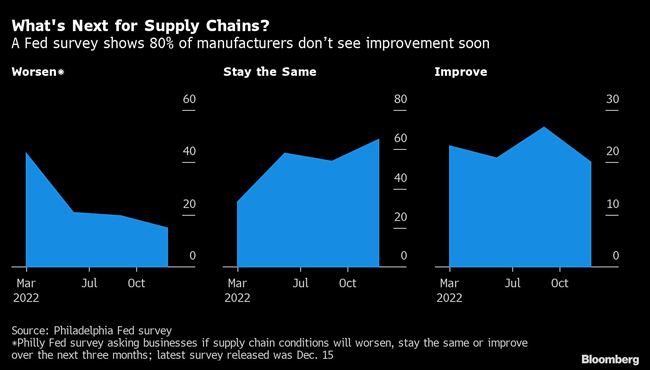 The outlook appears stable in the first quarter, say manufacturers in the district of the Federal Reserve Bank of Philadelphia, which has surveyed businesses quarterly about whether supply chains are worsening, staying the same or improving. According to the December poll, fewer say things are deteriorating but an increasing number say the status quo is what they expect for the next three months.

“It’s night and day,” Flexport’s Director of Ocean Trade Lane Management Nathan Strang said by phone. Overall the ports are operating relatively normally “but it’s not to say there are no challenges remaining.”

“I see this more as like a dormant volcano,” Strang said. “Nothing enormously changed other than just kind of a reduction in overall volume and sailing frequency of vessels, but all of the underlying causes are still there.”