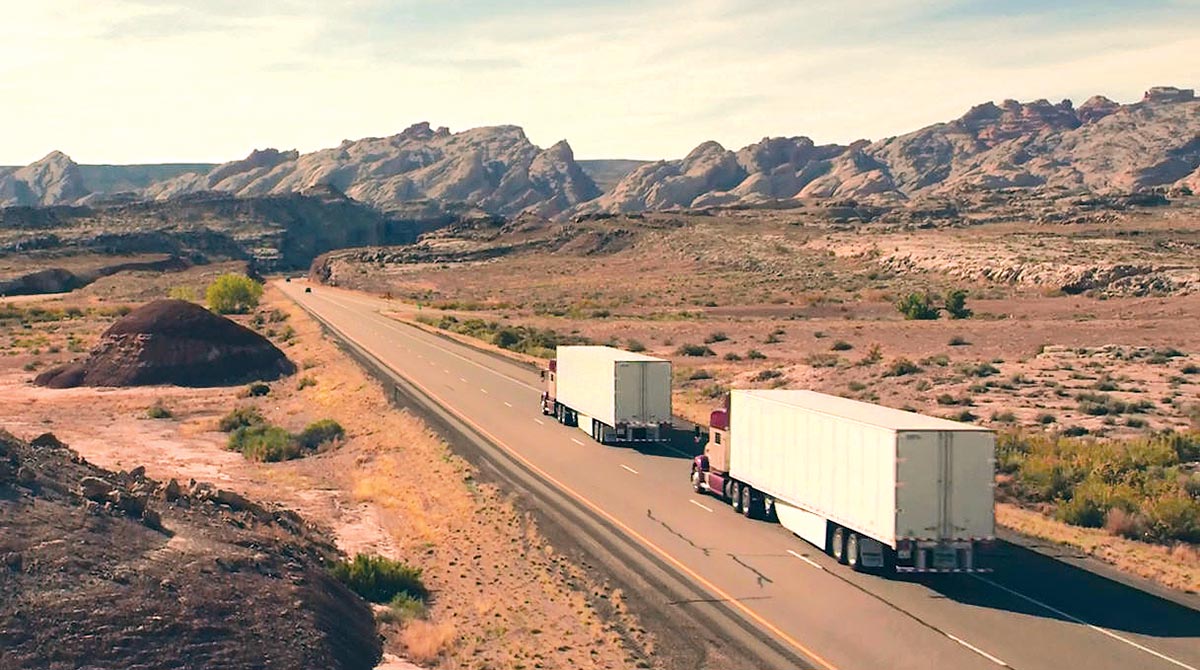 It could be years before drivers on U.S. highways catch a glimpse of a tractor-trailer rig cruising down the highway with another truck trailing a perilous 20 or 30 feet behind.

This form of extreme tailgating is known as “truck-platooning,” and is being researched as a way to gain fuel savings due to reduced aerodynamic drag. However, platooning can only work if it’s done safely, and that will require the development and testing of technology that allows the vehicles to be tethered wirelessly and “talking” to each other with regards to acceleration, braking, lane-changes and other aspects of highway driving.

Meanwhile, on the regulatory side, states are working to enable the testing of platooning technology, often setting up multi-state test agreements such as the I-10 Connected Freight Corridor Coalition, made up of transportation officials from California, Arizona, New Mexico and Texas. The coalition was formed by the Arizona Department of Transportation with the goal of connecting ports in Long Beach and Los Angeles, Calif., to Houston, Texas. Part of that mission includes studying truck-platooning. Officials are working with the Texas A&M Institute of Transportation to develop a “Concept of Operations” report, which is expected in February 2018.

“While this group started as an effort to support platooning, we quickly realized that there were other hurdles than allowing trucks to follow at a close distance, including permitting and parking, and the ConOps report should address those and more topics,” said Paul Sittig, technical and freight planning supervisor with the New Mexico Department of Transportation.

Meanwhile, New Mexico officials are working with Peloton Technology, a maker of truck-platooning technology, to study the company’s technology there.

In Texas, TTI is working with the Texas Department of Transportation to explore regulations related to truck platooning, as well as the many technical concerns around large freight vehicles closely trailing each other.

“It doesn’t make sense, to us, to do it in urban areas,” he explained. “The benefits aren’t there when you get congested. And the risk goes up. And the annoyance to the drivers; chances are they won’t enable them in stop and go traffic.”

In the next area of TTI’s study, the research will look at highway grade and whether the system is workable in hilly or mountainous terrain.

“There have been research projects using 3-D maps, the topographic information, to predict, for even adaptive-cruise-control, grades and optimize the engine control. But at a certain point these commercial vehicles, depending on load, engine configuration, are not going to be able to maintain their speed going uphill, and are going to have a hard time braking going downhill,” he added. “At some certain grade platooning is not going to make sense.”

These are only some of the many technical and regulatory hurdles being explored, and will need more time and effort. Which is why California Assemblymember Marc Berman, (D-Palo Alto), intruded a bill to allow the continued testing of Driver Assistive Truck Platooning technologies by Caltrans, California Highway Patrol and stakeholders until Jan. 1, 2020. This bill would require Caltrans to a report to the Legislature on findings related to the technology’s potential to reduce greenhouse gas emissions and increase driver safety by July 1, 2019. The bill is currently in the California Senate’s Appropriation Committee.

Officials in Nevada have worked with Peloton and Daimler Trucking to help those companies find ideal environments within Nevada to do some preliminary testing of their platooning technology.

“There is no requirement to obtain special permission from the state prior to operating any kind of truck platooning technology,” said Thomas Martin, an autonomous vehicle management analyst at the Nevada Department of Transportation.

“In the past, we have always worked with companies and Nevada law enforcement to allow for platooning to occur based on agreements set in place,” said Thomas, who described Nevada as having “an open-door policy when it comes to allowing truck platooning in our state.”

The passage of State Assembly Bill 69 this year makes platooning legal in Nevada.

“Platooning seems to be a way that the industry is looking in order to help with the cost-cutting process,” said Martin. “With that, it is hard to say when these companies will be coming forward with a ‘production-level’ platooning technology to safely operate on Nevada highways.