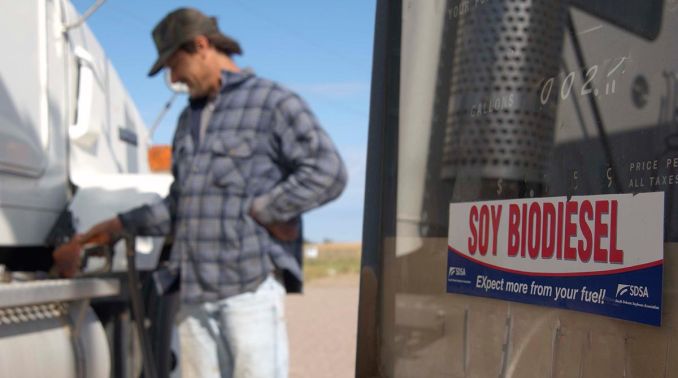 The state’s standard for the biodiesel blend will double to 20% at gas pumps next May, a decision that displeased trucking industry advocates.

The announcement made public by state commissioners at Farmfest in Redwood Falls has been in the works for a long time and was solidified last week.

“B20 will help keep Minnesota at the forefront of the homegrown clean energy revolution that is expanding economic opportunities for the state’s farmers and rural communities while reducing pollution and improving air quality for everyone,” Minnesota Commerce Commissioner Mike Rothman said. The Commerce Department tests fuel quality and ensures compliance with biodiesel standards.

Supporters like biodiesel because it helps soybean farmers and, they say, reduces deadly emissions. Truckers and producers remain concerned about supply of the product at a time when the industry’s productivity is already limited by a dearth of drivers. Trade associations are worried drivers will lose precious road time because of long waits at fueling stations.

The Minnesota Biodiesel Task Force, however, brushed aside those problems earlier this summer, saying supply would be adequate.

Minnesota Trucking Producers president and CEO John Hausladen said, “We’re disappointed the commissioners authorized the move to B20 before we had guarantees the fueling infrastructure was adequate.”

His trade organization was among those that sent a July 19 letter to key state commissioners. Others signed on include Magellan Midstream Partners, Alliance of Automobile Manufacturers, BP Products North America Inc., Flint Hills Resources and Minnesota Petroleum Council. The letter said, “The major Minnesota refiners and distribution points are not ready. Additionally, many Minnesota families and businesses own and operate vehicles not designed to use a 20% biodiesel blend.”

As evidenced by the Farmfest location, the change is popular with farmers.

Soybeans are one of Minnesota’s biggest crops, and supply a large portion of the state’s biodiesel fuel. Agriculture Commissioner Dave Frederickson said B20 is the “culminating step in Minnesota’s commitment to biodiesel and renewable fuels.”

The new standard will add an average of 63 cents to the market price of a bushel of soybeans for Minnesota farmers, while reducing about 1 million tons of carbon dioxide emissions next year. Soybeans sell for about $10 a bushel.

Beginning in 2019, B20 should be available from April through September. The winter mix will remain at 5% biodiesel.

According to Gov. Mark Dayton’s administration, the Minnesota biodiesel industry contributes at least $1.7 billion a year to the state’s economy. The state has three biodiesel plants — in Albert Lea, Brewster and Isanti — producing 74 million gallons of biodiesel a year.

Use of biodiesel also significantly reduces tailpipe emissions, according to the American Lung Association in Minnesota. B20 is expected to reduce 130 tons of particulate emissions and approximately 1 million tons of CO2 next year.