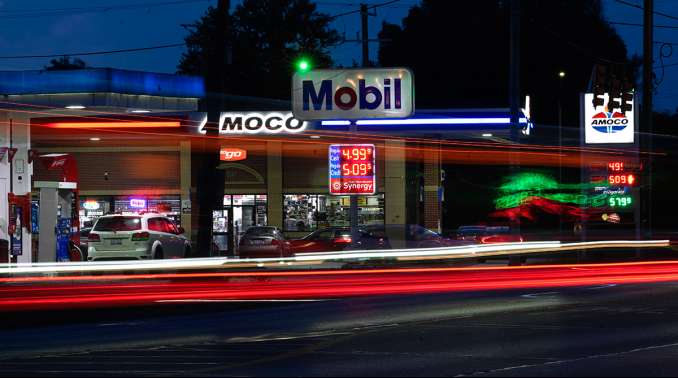 Motorists stop for fuel at gas stations in Detroit in July of 2022. (Paul Sancya/Associated Press)

Michigan’s gas tax is going up 1.4 cents per gallon starting Jan. 1, thanks to an automatic adjustment written into state law.

A law from the Gov. Rick Snyder era requires the gas tax to increase each year. Starting in 2022, the formula calls for an increase of either 5% or the inflation rate — whichever is lower. Because inflation has hovered around 8% in the past year, the gas tax will only go up by the maximum 5% in 2023.

The increase applies to gasoline, diesel and alternative fuels.

For Michiganders buying 15 gallons worth of gas, the increased tax would add on 21 cents to the total bill.

In 2016, Michigan’s gas tax was 19 cents per gallon, but has been raised to provide more funding for roads and infrastructure.

When combining state gas and sales taxes plus the 18.4-cent federal gas tax, Michigan’s total gas tax in July 2022 was 70.1 cents per gallon. It changes monthly with gas prices — because the 6% sales tax on gas equates to a higher amount per gallon when gas prices are higher.

Michigan had the sixth-highest overall gas tax in the nation in July, according to the U.S. Energy Information Administration. The only states with a higher gas tax were California, Illinois, Indiana, Pennsylvania and Washington.

States with the lowest gas tax include Alaska, New York (which suspended some gas taxes from June to December 2022), Mississippi, Hawaii and New Mexico.

Michigan lawmakers considered suspending the state’s gas tax in 2022 because of rising prices at the pump, but couldn’t come to a deal.

Michigan’s average gas price was $3.49, about 5 cents above the national average, per AAA on Dec. 2.

Gas is down 48 cents in the past month in Michigan, but still costs 21 cents more per gallon than it did a year ago.