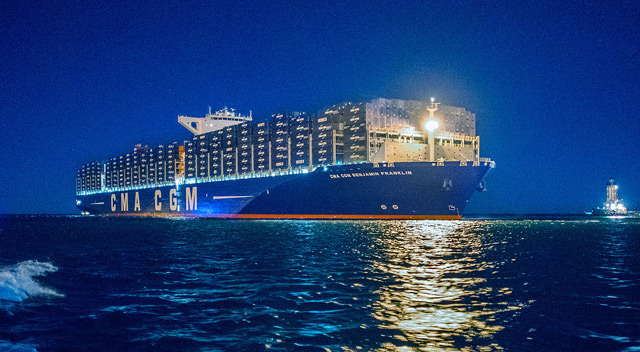 The largest containership ever to arrive at a North American port is docked at the southern tip of Los Angeles, a sign of the rapid changes under way in the global shipping industry. The CMA CGM Benjamin Franklin, an 18,000-container capacity ship that arrived Dec. 26 at the Port of Los Angeles on a maiden voyage from China and South Korea, can carry nearly a third more cargo than the largest ships that currently call at the San Pedro Bay ports. CMA CGM ranks No. 12 on the Transport Topics list of the Top 50 largest global freight carriers.

In an effort to move more cargo on less fuel, ocean freight carriers are in a race to build megaships with much larger capacities than the typical ships calling at U.S. ports. The average containership being built now is nearly three times the size of the average a decade ago.

The rapid increase in vessel size has posed challenges for ports around the world, which now must contend with enormous volumes of cargo arriving at once. The ports of Los Angeles and Long Beach, the nation's two busiest seaports, have been among the first in the United States to deal with the advent of larger ships.

Both ports are in the midst of hundreds of millions of dollars' worth of projects to deepen channels and expand terminals to adapt to the changing world of shipping.

Early this year, ports along the West Coast faced huge delays due to a contract dispute between the members of the dockworkers' union and their employers — terminal operators and shipping lines. The impasse led to a partial shutdown of 29 West Coast ports and enormous cargo backlogs.

Even before the labor strife, the arrival of larger ships and other operational changes in the shipping industry had begun to snarl traffic at Los Angeles and Long Beach.

Jock O'Connell, an international trade economist, said the arrival of the CMA CGM Benjamin Franklin is a sign that at least one shipping line is satisfied with the West Coast ports' ability to handle increased cargo loads. He said the San Pedro Bay ports are now moving cargo more efficiently and are better at handling larger ships than they had been in the past.

"It's a vote of confidence in West Coast ports," O'Connell said.

The ship is scheduled to depart the Port of Los Angeles on Dec. 30 and head to Oakland, where it will stop Dec. 31 before heading back to Shanghai.