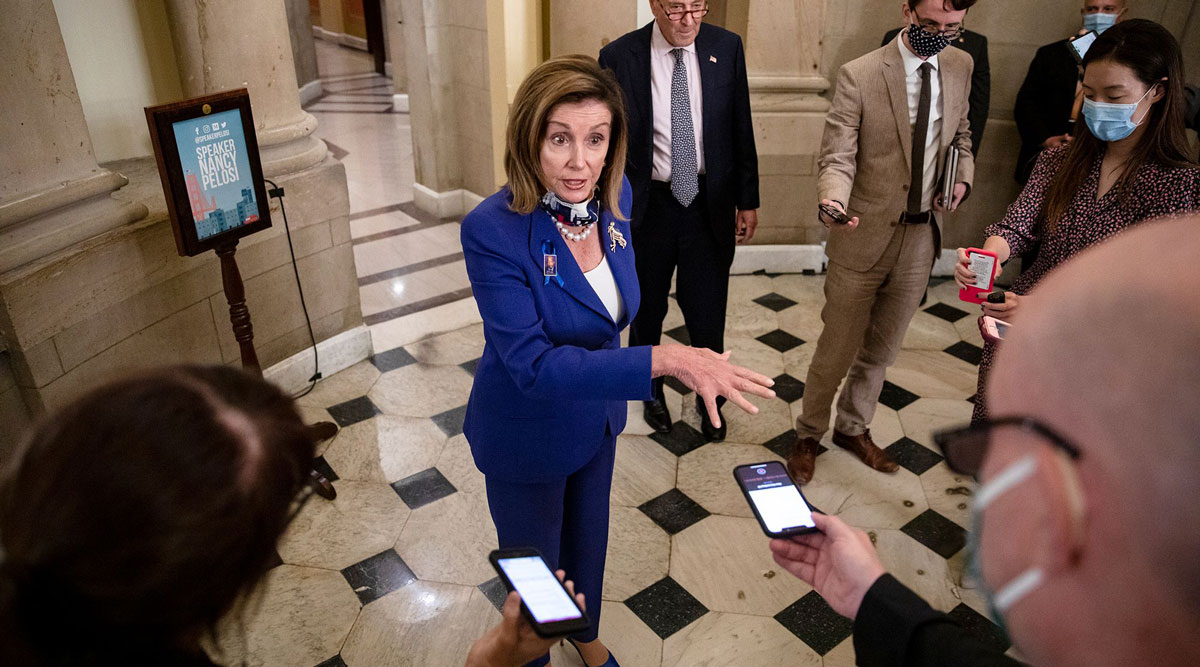 White House Chief of Staff Mark Meadows said Democrats rebuffed multiple proposals from the Trump administration to extend lapsing supplemental unemployment benefits and have continued to raise the ante in talks on a stimulus package to bolster a U.S. economy hobbled by the coronavirus pandemic.

“At the president’s direction, we have made no less than four different offers” on unemployment insurance and a moratorium on evictions, Meadows said July 31 at a White House briefing. “They’ve not even been countered with a proposal.”

House Speaker Nancy Pelosi said July 31 she’ll continue negotiations with Meadows and Treasury Secretary Steven Mnuchin, but said there can be no short-term stopgap measures without serious progress on a comprehensive virus-relief plan.

Pelosi said at her own briefing that the only reason to make a short-term accommodation to carve out a separate deal “is if you are on a path” toward an broader agreement.

“We anticipate we will have a bill but we are not there yet,” she said.

The most pressing issue in the talks now is about extra federal unemployment benefits of $600 a week that run dry as of July 31, leaving millions of out-of-work Americans without an additional safety net at a time when the jobs market is still depressed.

Republicans want to cut the benefit in the next stimulus package to a portion of lost wages, but Democrats have proposed keeping it at the current level.

In an attempt to prevent a lapse in benefits, Republicans including Trump are pressuring Democrats to go along with a stopgap extension of the payments, as well as a moratorium on evictions, while talks continue on a more comprehensive virus-relief bill.

Meadows didn’t give any details of what the White House has offered in the talks.

“The Democrats believe that they have all the cards on their side, and they are willing to play those cards at the expense of those who are hurting,” Meadows said.

But Pelosi said that Republicans were at fault for waiting to come up with their own virus-relief proposal at the start of this week even though the House passed the Democrats’ plan two months ago.

“The Republicans said they wanted to take a pause. Well, the virus didn’t,” she said. “Clearly they, and perhaps the White House, do not understand the gravity of the situation.”

The Senate is scheduled to begin its August break at the end of next week. House Majority Leader Steny Hoyer said the chamber won’t be in session next week, but members will be subject to recall on 24 hours’ notice if a deal is reached and ready for a vote.

Senate Majority Leader Mitch McConnell on July 30 moved forward with a plan to set up votes next week on Republican proposals to extend the lapsed supplemental unemployment insurance.

The GOP gambit is almost certain to fail because McConnell would need Democratic votes to pass any legislation. But it will give Senate Republicans a chance to go on the record as saying they tried to act.

The two sides have to bridge significant differences between the $1 trillion stimulus plan the GOP released July 27 and the $3.5 trillion package that House Democrats passed in May.

The biggest roadblocks remained McConnell’s plan to shield employers against lawsuits stemming from COVID-19 infections, and Democrats’ drive to maintain the $600-a-week supplemental unemployment payments and provide $1 trillion in aid to state and local governments.

Erik Wasson, Jennifer Jacobs and Laura Litvan were the primary contributors to this report.