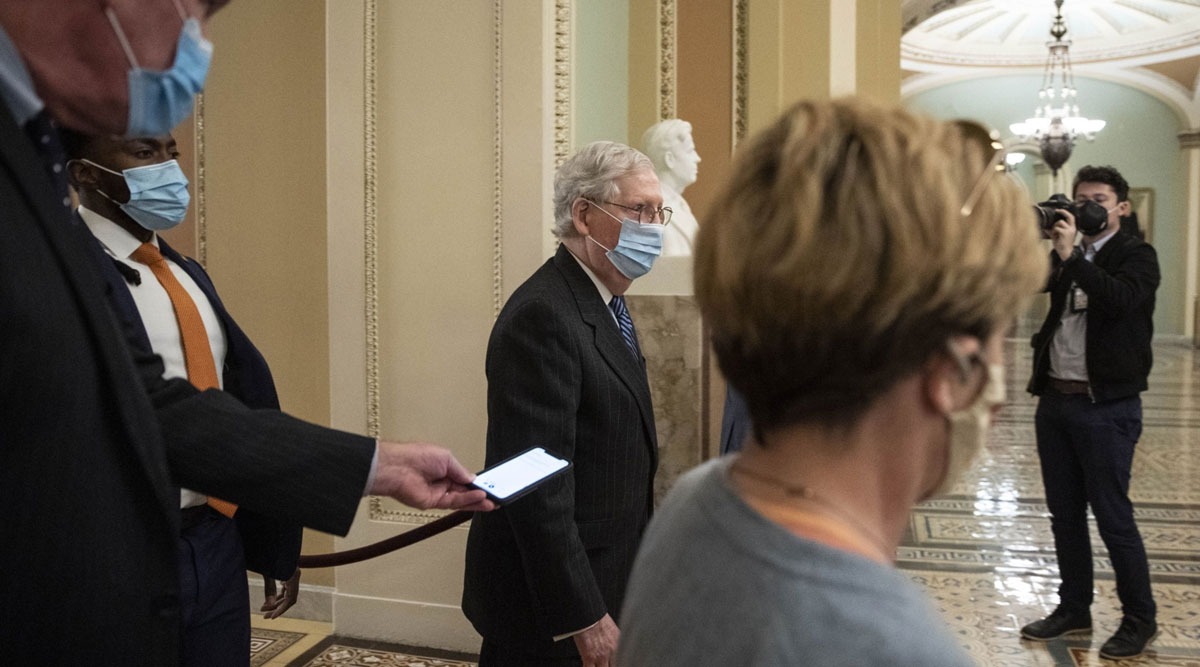 Senate Majority Leader Mitch McConnell on Dec. 29 blocked an attempt by Democrats to force quick action on increasing direct stimulus payments to $2,000 despite President Donald Trump’s demands for the change.

McConnell objected to a motion by Senate Minority Leader Chuck Schumer to approve by unanimous consent a stimulus-checks bill that passed the House on Dec. 28. He also blocked a motion by Sen. Bernie Sanders to vote on the stimulus checks immediately after the Senate votes on overriding Trump’s veto of a key defense policy bill.

Floor requests to immediately pass legislation are frequently criticized as stunts, but this episode highlights how unlikely it is that the Senate will pass a bill increasing the payments before Congress adjourns Jan. 3.

Just before Schumer made his motion, McConnell said the Senate will consider higher stimulus checks in conjunction with two other Trump complaints unrelated to the pandemic relief bill he signed into law: an investigation into alleged election fraud and reworking a law that shields technology companies from liability for user content.

“This week, the Senate will begin a process to bring these three priorities into focus,” McConnell said, without explaining when or if a vote will happen.

Trump on Dec. 29, in a series of tweets, again demanded that the Senate scale up the stimulus payments.

Despite the push by Trump, spending $464 billion on higher stimulus checks is not popular among Republicans who are increasingly focused on the burgeoning national debt. Only 44 Republicans joined 231 Democrats on Dec. 28 to pass a bill increasing the payments to $2,000. In the Senate, just a handful of Republicans are now publicly on board, including Florida’s Marco Rubio and Missouri’s Josh Hawley.

The GOP tension comes at a crucial time for Republicans who are fighting to maintain control of the Senate in a pair of Georgia runoff elections Jan. 5. On Dec. 29, both GOP incumbents in those races, David Perdue and Kelly Loeffler, also came out in favor of the $2,000 checks.

McConnell has several options to tackle the direct-payment conundrum Trump put him in. With the Schumer attempt blocked, McConnell could point out that there is not agreement to process the House bill on the floor by the time the current session of Congress ends Jan. 3.

That approach could risk a backlash from Trump and his supporters, however. McConnell also could promise to work on the matter in the next Congress that starts next week.

Kicking the can down the road leaves McConnell with another problem, with Sanders saying he will delay any attempt to override Trump’s veto of a separate defense bill this week unless there is a vote on stimulus checks.

Another option would be for McConnell to present his own bill, combining higher stimulus checks with other the two other issues that Trump wants addressed.

But combining those elements into a package would poison a stimulus-checks bill for many Democrats. It likely would fail if brought to a vote.

Democrats, for their part, are relishing the political turmoil for the GOP and hoping it will give them a chance to flip the Senate to help enact President-elect Joe Biden’s agenda.

“The House and the President are in agreement: we must deliver $2,000 checks to American families struggling this Holiday Season,” House Speaker Nancy Pelosi said in a tweet, calling on the Senate to pass the higher payments.

The House and the President are in agreement: we must deliver $2,000 checks to American families struggling this Holiday Season.

The House just passed the #CASHAct — it’s time for the Senate to do the same. — Nancy Pelosi (@SpeakerPelosi) December 28, 2020

Although Biden on Dec. 28 said he supports the $2,000 payments, it is unclear if he will prioritize them in his stimulus proposal to Congress after the Jan. 20 inauguration if Congress fails to pass them before then.

The nonpartisan Committee for a Responsible Budget estimates that the bigger payments would raise disposable income in the first quarter to as much as 25% above pre-pandemic levels. The legislation would produce an additional 1.5% in GDP output, but not all of the growth would occur in 2021, according to Marc Goldwein, an economist who co-authored the CRFB projections.

But many Republicans had opposed stimulus payments larger than the $600 in the existing law, in part over concerns about the price tag. Bumping the payments to $2,000 would cost about $463.8 billion, according to estimates by the staff of the Joint Committee on Taxation.