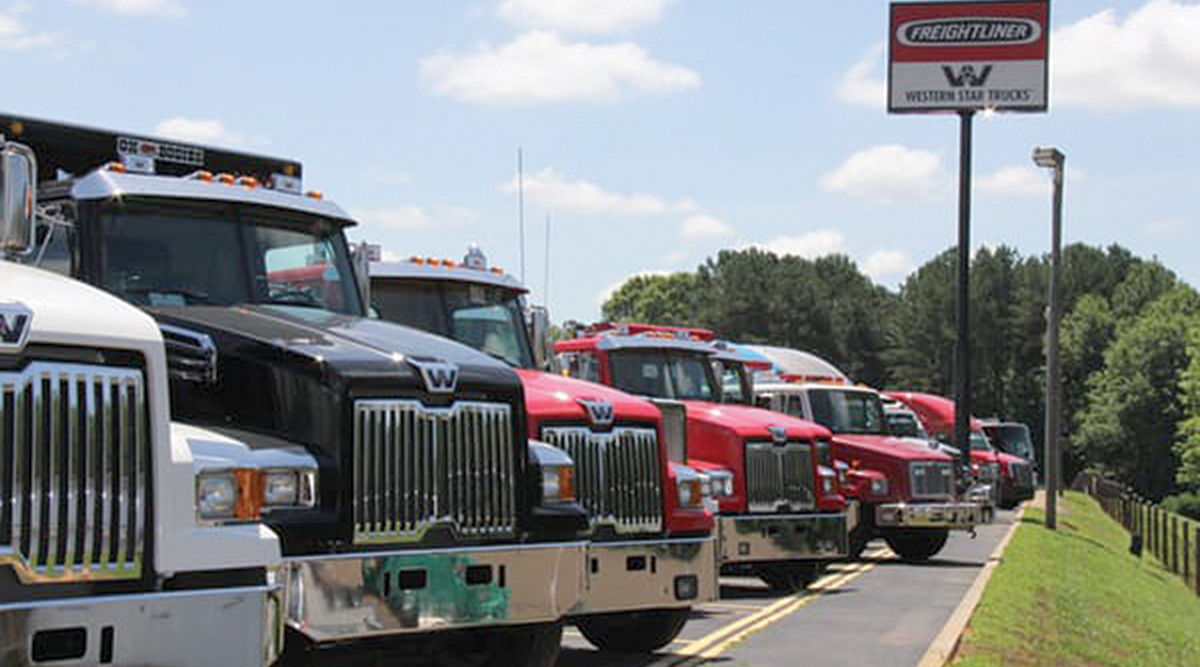 Western Star trucks on a sales lot. Western Star was the only U.S. Class 8 truck maker to see a sales increase from March 2019 to March 2020. (Peach State Freightliner)

U.S. Class 8 retail sales in March fell 27.8% compared with a year earlier, WardsAuto.com reported. Most truck makers reported double-digit declines, with only the smallest one posting a gain.

U.S. replacement level sales are said to be 16,000 vehicles a month. 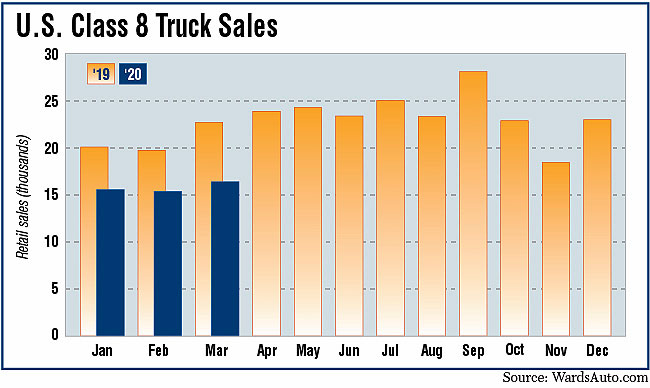 Sales for the rest of the year are likely to be worse than the March volume, experts said, reflecting the increasing bite the coronavirus took out of routine commerce and freight levels as consumer spending, retail sales and factory production retrench and unemployment claims soar.

There is reassuring news, though, one analyst said.

“The thing is, trucks are indispensable to this economy. And no amount of virus is going to change that,” ACT Vice President Steve Tam told Transport Topics.

“So part of the reason we are so bearish on production is we think original equipment manufacturers are going to do everything they can to burn off the excess inventory they’ve got. It’s time to pay Peter back, since we robbed him,” Tam said, referring to the overbuild of heavy-duty trucks in 2019.

Meanwhile, market leader Freightliner, a brand of Daimler Trucks North America, earned a 36.3% market share on sales of 5,983. That was down 28.5% compared with a year earlier.

The industry’s March total “doesn’t give you any indication, because the environment’s changed, of what it means [for sales] going forward,” said Don Ake, vice president of commercial vehicles at FTR. “You would expect the number in April to be much lower because there hasn’t been a lot of activity going on.” 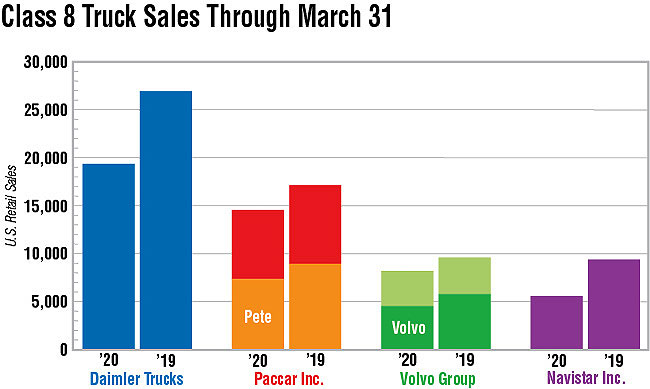 A related factor influencing upcoming sales was the temporary shutdown at all truck plants for various weeks in April. Some plants have announced restarts.

“The shutdowns were motivated by health concerns, but extended by business concerns because the demand was down and there are near-record levels of inventory out there,” said Ake.

All truck makers are offering incentives to increase sales.

“We have several examples of truck sales in our markets that are in large part due to Volvo and Mack being creative with financing, being great partners on trade packages, and in providing cap-ex [truck] discounts on new trucks,” said David Kriete, CEO of Kriete Group.

Mack and VTNA are units of Volvo Group.

“Typically we do well with both brands at the end of the quarter,” Kriete said. “In the vocational segment, March typically marks the end of the fiscal year for many construction companies. So cap-ex is squeezed into the previous fiscal year, setting up for spring construction launch in the northern parts of the country.”

VTNA’s March retail sales numbers were the strongest for the truck maker this year, said Magnus Koeck, vice president of marketing at VTNA, referring to both a NAFTA level as well as a U.S. level. 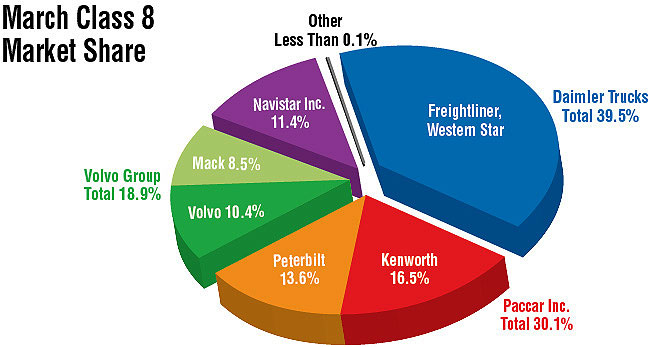 “However, March was also most likely the last month showing somewhat regular business in North America,” Koeck said. “We can expect significantly lower numbers for the industry moving forward and we will have the first indication of what that level will be once we have passed through April. Now, more than ever, uptime and just-in-time deliveries are extremely important for our customers and their customers. We are monitoring the situation carefully on a day-to-day basis, while complying with federal and state guidelines for the health and safety of our employees.”

“At Mack Trucks, we are still seeing demand for our products as trucks move off dealer lots and from body builders to customers, particularly in the construction segment, which we anticipate will be a bigger part of the Class 8 market in 2020,” said Jonathan Randall, senior vice president of North American sales at Mack.

Kenworth and Peterbilt are brands of Paccar Inc.

Comments from other truck makers were unavailable.