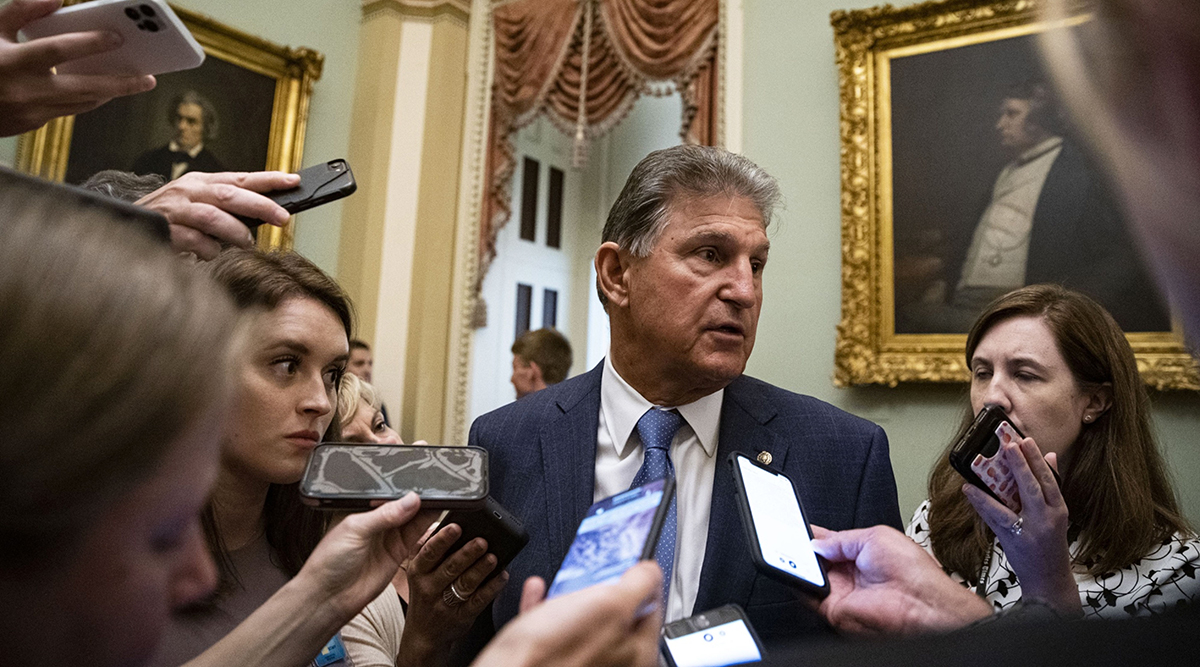 “Let’s sit back. Let’s see what happens. We have so much on our plate,” Manchin said. (Al Drago/Associated Press)

The West Virginia Democrat, a linchpin vote in the evenly divided Senate, said at an event in his home state on Sept. 1 and in a Sept. 2 Wall Street Journal op-ed that rising inflation and a soaring national debt necessitate a go-slow approach and a “significantly” smaller plan than the one Democratic leaders and the White House have endorsed.

“By placing a strategic pause on this budgetary proposal, by significantly reducing the size of any possible reconciliation bill to only what America can afford and needs to spend, we can and will build a better and stronger nation for all our families,” Manchin said in the op-ed.

Manchin’s resistance to the core of Biden’s economic plan caps a politically painful month for a White House that has grappled with a chaotic withdrawal from Afghanistan, a resurgent pandemic and a massive hurricane that cut a path of death and damage from Louisiana to New York.

In comments Sept. 1 at an event hosted by the West Virginia Chamber of Commerce, the moderate Democrat said his party should “hit the pause button.” Lawmakers, he said, have too many other pressing issues before them, including heightening national security concerns after the Taliban takeover of Afghanistan.

“Let’s sit back. Let’s see what happens. We have so much on our plate,” he said.

Manchin’s comments come as Democratic leaders and committee chairmen in the Senate and House work out the specifics of the economic package, with a goal of moving it through Congress soon after lawmakers return from a recess later in September. All members of the Senate Democratic caucus would have to back the measure for it to get the 51 votes needed to pass, with Vice President Kamala Harris providing the tie-breaking vote.

A spokesman for Senate Majority Leader Chuck Schumer didn’t immediately respond to a request for comment about Manchin’s request, and White House Press Secretary Jen Psaki did not immediately provide a comment.

The chairman of the Congressional Progressive Caucus, Rep. Pramila Jayapal, replied “Absolutely not” on Twitter to Manchin’s idea of a pause.

The spending package also is facing obstacles in the House. Democrats can only afford three defections in that chamber if Republicans are united in opposition, and some moderate Democrats also are balking at the size of the package being drawn up.

Manchin also called on the House to pass within a few weeks a Senate-passed $550 billion bipartisan infrastructure bill. House Speaker Nancy Pelosi has promised progressives in the chamber that she will marry that legislation with the much bigger Democrat-only tax-and-spending package, although moderates have been promised an infrastructure vote by late September.

In an early sign of the deep challenges Pelosi faces on the measure, last week she couldn’t initially muster the votes to clear a procedural vote to adopt the budget plan that enables the economic package to advance. She had to strike a deal with 10 Democratic House moderates, which set — in writing — a Sept. 27 deadline for a vote on the infrastructure bill.

Progressive Rep. Alexandria Ocasio-Cortez, a New York Democrat, said after that agreement that she still wants the infrastructure and reconciliation bills voted on at the same time.

“If that is not the case, then they shouldn’t count on us,” she said.

House panels are beginning work on select portions of the $3.5 trillion package, but timing isn’t clear in the Senate. Despite a Sept. 15 deadline for Senate committees to complete work on the bill, no panels in that chamber have yet announced legislative meetings.

Manchin last month voted with other Senate Democrats to help pass a fiscal blueprint that could help enable the broader economic bill to pass the Senate without any GOP support, by short-circuiting the filibuster. However, even then, he didn’t commit to backing a bill as big as $3.5 trillion, citing rising inflation and a soaring federal debt.

Senate Minority Leader Mitch McConnell this week said Manchin and another Democratic moderate, Kyrsten Sinema of Arizona, are seen by the GOP as their best prospects for defeating the big-ticket economic package.

“These are two Democratic senators that seem to have some real resistance to all this,” McConnell said at an event in his home state of Kentucky. “I pray for their good health and wise judgment every night. I recommend you do the same.”

—With assistance from Mark Niquette, Billy House and Jarrell Dillard.