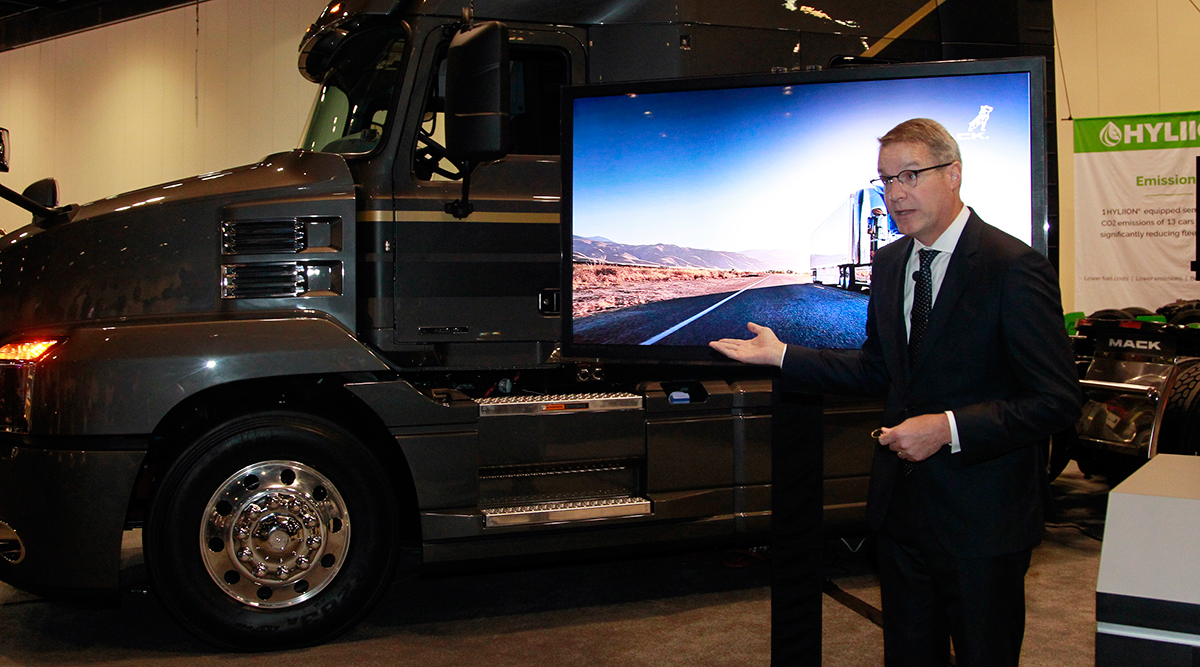 ORLANDO, Fla. — Mack Trucks raised its 2017 retail sales forecast by 4% and expects an increase beyond that in 2018.

Mack raised its projection for U.S. and Canada Class 8 retail sales this year to 235,000 trucks compared with 225,000 in its previous forecast, and expects 2018 sales will rise more but declined to provide a number.

Mack is a unit of Volvo Group.

At the same time, freight volumes and rates are coming back up, Randall said. “What’s happening is the market is shifting more to longhaul from where it has been,” he said. 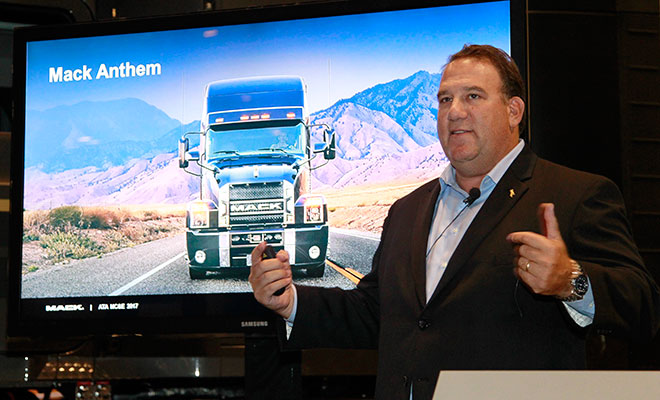 Randall predicted general growth in the longhaul segment eventually would account for about 46% of the registrations of Class 8 trucks compared with the 41.8% through August, and 46% would equal longhaul’s share in August 2016. Traditionally, the longhaul segment has been 48%, he said, citing data from IHS Automotive.

The newly debuted Anthem model, Mack’s most fuel-efficient truck, puts the company back in the tall sleeper, longhaul segment in a major way, he said. Mack expects the Anthem will grow the company’s market share beyond its current slice of 8.5% in the United States and Canada. That share has risen 1 percentage point from the beginning of 2016 amid growth in the regional-haul and construction segments.

Randall said orders for the Anthem — which debuted in mid-September and goes into production in the first quarter of 2018 — already have outpaced what Mack expects to sell this calendar year of its existing Pinnacle longhaul model.

Also, Mack’s forecast calls for even larger incremental growth in the regional-haul and day cab segments, he said, without providing a number. Registrations of trucks involved in regional haul reached 28.4% through August compared with 26.8% a year earlier.

The company made the announcements Oct. 23 during a press conference at American Trucking Associations’ Management Conference & Exhibition, when it also renewed its long-standing sponsorship of the federation’s Share the Road safety program.

Share the Road is intended to increase the driving public’s awareness of how to coexist with heavy-duty trucks. It is Mack’s 17th consecutive year of sponsoring the program, which began in 1986.

During the press conference, Randall presented ATA with a 2018 Anthem to use in the program, whose ambassadors are an elite group of drivers that make up America’s Road Team.

“Our responsibility is to bring the best of the best,” ATA President Chris Spear said.

“Mack’s responsibility is to put them in the best equipment. I’ll tell you, they didn’t spare any expense with this [Anthem]. This is an outstanding contribution to the Share the Road program, and we are thrilled to have it,” Spear said.

The Anthem replaces the Mack truck that President Donald Trump climbed behind the wheel of in March, Spear said.

ATA, prior to participating in a health care roundtable at the White House, brought the Road Team and fleet executives for a meet-and-greet with the president. Two Share the Road trucks were parked on the South Lawn.

Speaking of Trump, Spear said, “He’s an advocate. He’s a fan and it’s because of the equipment and the best drivers, and the emphasis we put on highway safety.”