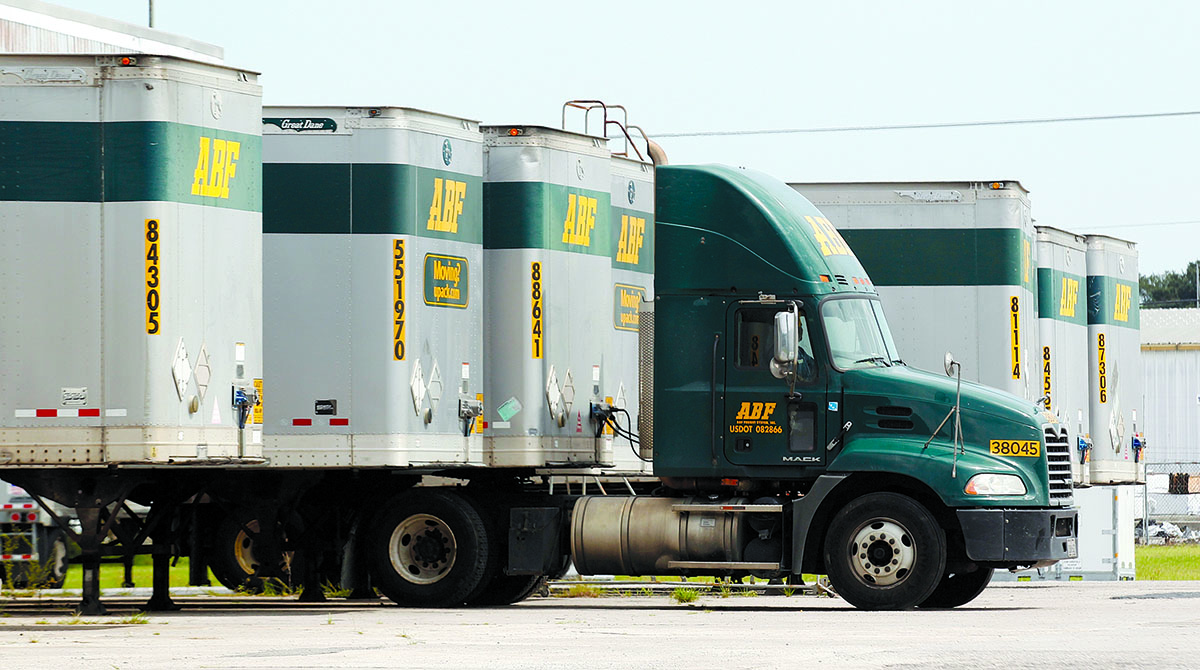 An ABF truck pulls out from a loading dock. (John Sommers II for Transport Topics)

Leaders at prominent less-than-truckload carriers are optimistic about the future as their companies adapt and expand services to capitalize on favorable long-term trends, such as the move toward smaller shipments and the growth of e-commerce.

Factoring in a buoyant econ­omy, every top executive agreed that the industry’s prospects are as bright as they have been for years. Typical of that view was Adam Satterfield, chief financial officer at Old Dominion Freight Line Inc.

“There is going to be a continuation of the long-term shift within supply chains that will likely move freight into LTL from other modes because of reduced shipment sizes and length of haul,” Satterfield said. “Supply chains, as they become more sophisticated, focus on high quality service.”

Old Dominion ranks No. 11 on the Transport Topics Top 100 list of the largest for-hire carriers in North America.

“The LTL industry is benefiting from tailwinds,” said Keybanc Capital Markets analyst Todd Fowler, who believes favorable industry conditions will remain in place for the next 12 months, barring an economic shock.

An intense focus on offering higher levels of service, accomplished in a variety of ways, is the foundation for capitalizing on the favorable environment, company leaders told Transport Topics.

“Superior customer service, the ability to offer end-to-end supply chain solutions and trusted expertise are differentiators,” ArcBest Corp. CEO Judy McReynolds said. “While some shippers want just LTL alone, increasingly we find that customers seek full solutions and a range of options, along with expert advice on how to optimize their supply chains.” ArcBest ranks No. 13 on the for-hire TT100..

“Carriers who can offer capacity will be in a good position to take share,” said Ray Ramu, chief commercial officer at Saia Inc., the  No. 27 carrier on the for-hire TT100.

Ramu cited the LTL fleet’s expansion into the Northeast and multiyear strategy to serve all 48 contiguous states.

The expansion of e-commerce is another major consideration.

“It is increasingly important to have appropriate locations” as e-commerce proliferates, said Darren Hawkins, CEO of YRC Worldwide. “It is increasingly difficult to acquire property in proximity to distribution centers being built by retailers.”

Hawkins illustrated that growing importance by noting that retailers now generate 40% of YRC’s business, compared with 25% a decade ago.YRC ranks No. 6 on the for-hire TT100. 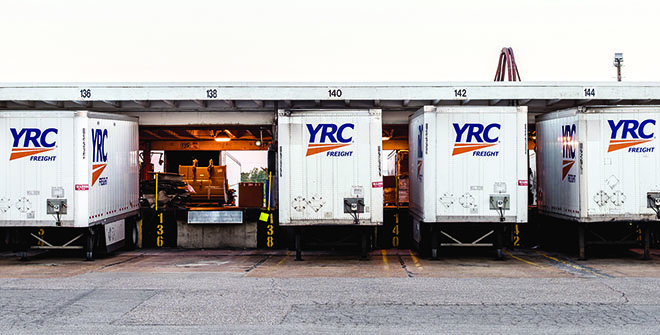 “We have a great deal of experience in final-mile deliveries thanks to our U-Pack residential moving business,” ArcBest’s McReynolds said. “The final-mile market opportunity alone is estimated to be $13 billion. These are often complex deliveries and can require a variety of different solutions, like white glove, curbside, threshold, assembly.”

XPO Logistics Inc. President Troy Cooper underscored the value of linking LTL service with the company’s burgeoning network of final-mile delivery hubs that is being increased to more than 80 facilities.

“As residential shipments increase, LTL carriers will begin to build more route density that will ultimately reduce the costs associated with serving this market,” he said.

Visibility to the customer

Hoelting underscored the critical link between expanded service offerings and familiar basics such as on-time and damage and claim-free service.

“A key differentiator is to bring customers that quality service across a broad portfolio to meet all their transportation needs,” he said. “Quality service and meeting customer expectations are core requirements to attract and retain customers.”

Saia’s Ramu agreed, citing the importance of “being easy to do business with, providing real-time shipment visibility to the customer, being proactive as it relates to status updating and finding ways to reduce driver delays.”

“The introduction of technology, and the ability to use it well to make the best decisions, is now — and will continue to be — a big differentiator,” he said, pointing to the use of handheld de­vices and in-cab technology.

“Adhering to processes to do things right the first time is another,” he added. “The winners will also be those that take care of their customers through top-notch service and account management.”

Industry leaders stressed multiple benefits and opportunities afforded by the use of technology. Estes ranks No. 14 on the for-hire TT100. 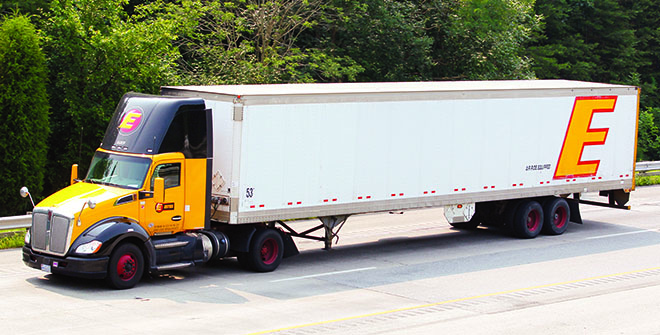 Cooper said XPO uses handhelds and inspection tablets for drivers and dockworkers as well as new LTL algorithms for pricing and network optimization. That’s accompanied by web integration to give customers more capabilities — without custom programming — for delivery and pickup management, pricing and planning and electronic document handling. XPO ranks No. 3 on the for-hire TT100.

Information from the truck, including data generated by electronic logging devices, also is making a positive contribution, said YRC’s Hawkins, ODFL’s Satterfield and others.

“We see a tremendous opportunity for blockchain to streamline and enhance the supply chain,” Hawkins added.

YRC is a member of the Blockchain in Transport Alliance, which seeks to create standards for the distributed ledger technology in the transportation industry.

LTL carriers have made noticeable progress in capturing product characteristics such as weight and cube, but more advancements are needed to enhance freight rating accuracy, he said. That will help to keep customers on an even playing field.

Jindel credited carriers that measure cube at the customer’s dock instead of at a terminal. Earlier availability of that information will help carriers to plan better and boost linehaul load factors, he said.

Another positive step will be to convert paper LTL bills of lading to electronic transmission, which will reduce costs and errors alike.

LTL fleets also have learned from past mistakes on pricing, Keybanc’s Fowler said.

“The LTL industry has made significant improvements in the past decade,” he said. “Going back to the Great Recession, there were bad actors in pricing. We have seen that go away almost completely. Management teams realize they made mistakes in the past and won’t repeat them.”

As evidence, Fowler pointed to weak freight markets in 2015 and 2016, which LTL carriers weathered without reverting to price wars.

Investments at XPO, for example, include $90 million in equipment over 12 months, Cooper said.

“We’re making these investments because we see attractive short- and long-term LTL market opportunities,” he said.

A focus on people also is evident. 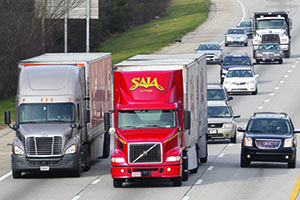 Saia’s Ramu stressed stability as a key factor in recruiting.

“Potential candidates want the security of knowing the company will be around in the future,” Ramu said, adding that Saia’s lengthy industry record has helped to attract talented employees.

“Having a successful history demonstrates a winning culture. People want to be part of a strong culture, they get excited about it, and they want to contribute to it,” he said.

“The one word we focus on the most is culture,” ODFL’s Satterfield said. “It is underap­preciated by many. How employees are ­treated creates motivated workers who speak positively about our company. That attracts new employees that come into our business.”

Hupp, of Estes Express, summed up the importance of the human factor in trucking.

“We’ve long believed that our employees are the cornerstone of our company’s success,” he said. “Estes is family-driven with a family-inspired culture, so treating our teammates well is part of how we do business.”

Trucking Turns From Pandemic to Prosperity

Does Your Business Belong on Our List of Top 100 For-Hire Carriers?