Logistics Revenues Due to Go Up in Quarterly Reports, but Margins Still Drag Down Profits 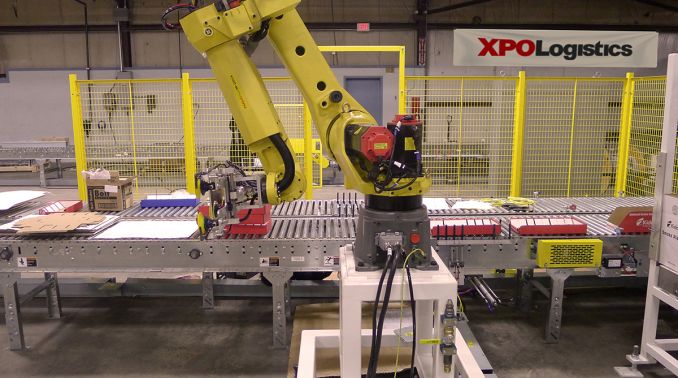 Third-party logistics firms capitalized on stronger demand to transport freight this summer but spent more to purchase trucks, resulting in what Wall Street analysts predict will be a mixed-earnings season.

C.H. Robinson Worldwide, Echo Global Logistics and Hub Group are expected to record revenue growth year-over-year but see declining earnings, according to the Bloomberg News consensus estimate. For example, analysts forecast that C.H. Robinson’s top-line revenue will grow 10% to $3.68 billion, but that its profits will drop 10% to $116.6 million or 83 cents per share.

The Eden Prairie, Minn., company, which ranks No. 5 on the Transport Topics Top 50 list of the largest logistics companies in North America, relies upon contract prices for nearly 65% of its business. However, given the bustling spot market, the broker is paying more to purchase transportation, slicing into its margins.

Landstar System, by contrast, thrives in the current market because it does more spot business, according to industry analysts. Its revenue is expected to grow about 13% to $887.4 million and profits could grow 10% to $39.7 million or 94 cents per share. Landstar ranks No. 45 on the TT Logistics 50.

Roar Logistics, No. 61 on the freight brokerage sector list, approached customers in the third quarter to renegotiate contract rates, and most of them accommodated the company, according to CEO Robert Rich.

“The contract rates, in some cases, are being thrown out the window because you can’t get trucks at those prices without taking $1,000 or $1,500 losses, which isn’t good for business,” he said. “The smart shippers realized that if they go out to 20 carriers and stuck to their contract rates, they may not get a truck for two weeks, if at all. Shippers used to be able to dictate price to the carriers, but things have changed.”

Last quarter, Roar’s revenue and volumes climbed more than 10% versus 2016, yet margins fell about 200 to 250 basis points. Rich characterized the first two months of the quarter as mediocre, but conditions rapidly swung during the week of Sept. 11.

“That week was our biggest week ever in our 14-year history, but the week before we were barely breaking even in our brokerage. It’s almost as if a light just switched on and we got a ton of freight. I’ve done more in revenue in the last three weeks than the six weeks leading up to it,” he said in an Oct. 10 interview. “Once the first shoe dropped with a broker raising its rates, everyone started doing the same thing.”

Jeff Tucker, CEO of Tucker Company Worldwide, agrees that the supply-and-demand curve is shifting enough toward carriers that shippers will seek out brokers to find capacity in 2018.

“Shippers should be integrating the best brokers they’ve met into their core provider network as a shoulder-to-shoulder partner along with core carriers,” he said. “Potentially that will mean higher revenues and a little bit more profit down the line.”

Tucker declined to provide financial information for the third quarter on revenue or margins, but he said demand for other vital third-party logistics services is multiplying, including supply chain optimization and consulting.

At Chief Industries Inc., its flatbed trucking divison — Chief Carriers Inc. — flourished in the third quarter, but its margins have shrunk in the brokerage division — Chief Logistics Inc. — for the same reason. Like C.H. Robinsion, Chief Logistics mostly operates on contract business.

“There are indications that rates will be a little bit more favorable for carriers and brokers in the coming months and next year, whereas it was a little bit more in favor of shippers the last few years and even for a portion of this year,” General Manager Bob Clark said.

Nevertheless, he acknowledged that it’s unclear how the company will approach contract brokerage pricing next year, given no one knows how prices will fluctuate after truck drivers using paper logs are placed out of service after April 1.