As L.A. Ports Automate, Some Workers Are Cheering On Robots 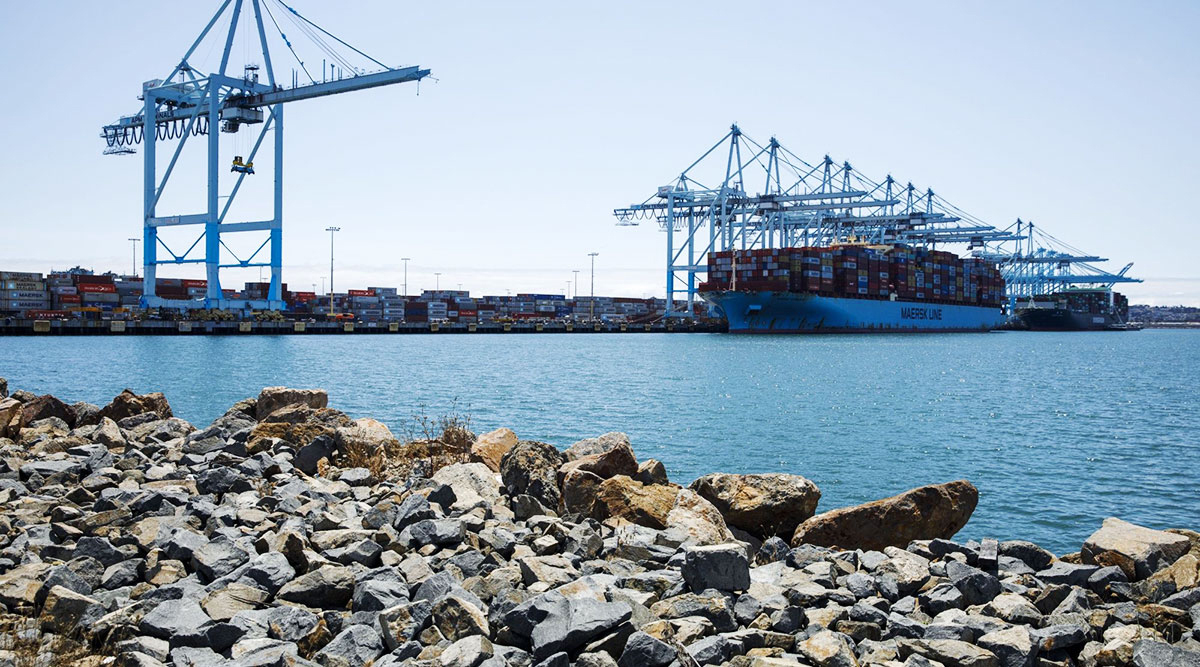 Day after day, Walter Diaz, an immigrant truck driver from El Salvador, steers his 18-wheeler toward the giant ports of Los Angeles and Long Beach. Will it take him a half hour to pick up his cargo? Or will it be as long as seven hours? He never knows.

Diaz is paid by the load, so he applauds the arrival of more waterfront robots, which promise to speed turnaround times at a port complex that handles about a third of the nation’s imported goods.

But what about the thousands of International Longshore and Warehouse Union workers who have mounted massive protests, saying the robots will replace human jobs? The ILWU members, who transfer cargo from ships to trucks and direct terminal traffic, “don’t care about the drivers,” said Diaz, 41, who has serviced the ports for two decades. “Never. We sit in line while they take two-hour breaks. With automation, we don’t have that problem.”

The arrival of robots at the nation’s largest marine terminal, a 484-acre facility run by Danish conglomerate A.P. Moller-Maersk, is exposing a stark economic divide between two sets of Southern California workers. 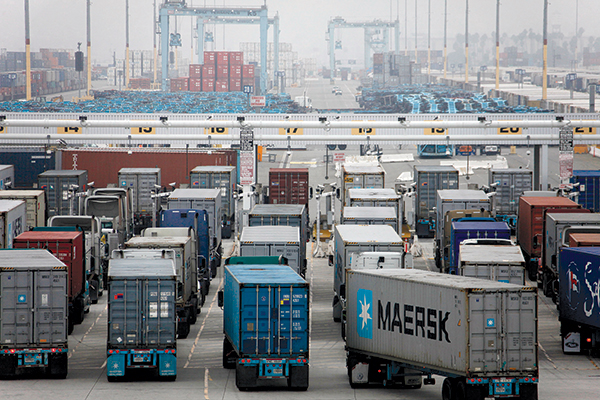 Trucks wait to be loaded at the Port of Los Angeles. (Nick Ut/Associated Press)

On one side are well-paid union members, many of them third- and fourth-generation dockworkers. On the other is a nonunion, largely immigrant and Spanish-speaking workforce of independent contractors, who lack the hourly pay, overtime guarantees, pensions, healthcare insurance and job security that ILWU workers enjoy.

The powerful longshore locals, with some 9,300 registered members, captured public attention earlier this year, battling Maersk’s plans with marches through San Pedro, boisterous public hearings, community petitions and support from elected officials. In the end, they were unable to stop the project because, in exchange for higher pay and better benefits over the years, ILWU contracts have explicitly allowed for automation.

Notably, throughout the four-month uproar, the ports’ 13,000 truckers were all but absent from the debate.

“The truckers are mostly nonunion, so they don’t vote as a block or make political contributions as a block,” said Wim Lagaay, chief executive of Maersk’s APM Terminals North America. “They are not organized. They don’t have lobbyists. They don’t have a voice.”

But on private Facebook pages, which count thousands of drivers, they do.

There, truckers celebrate automation and rail against dockworkers and city politicians. And they lament their own powerlessness, even as the ILWU engages in high-level talks with other terminals over automation issues.

One post excoriated the dockworkers as “fools [who] took advantage of the job they were given while we suffer. They thought they were untouchable. Now they’re crying idiots. They saw truckers were pro-automation, now they want to [expletive] with us even more.”

And another: “Hopefully automation kicks in and then all these lazy ... longshoremen start collecting unemployment.”

At Maersk’s sprawling APM terminal, also known as Pier 400, the first batch of 50-foot-high robots, painted baby blue, looms over stacks of brightly colored containers holding everything from sneakers and toys to computers and auto parts. Over the next three years, 100 of the driverless straddle carriers, as they are called, will replace 200 existing cranes and trucks operated by some 500 unionized dockworkers across the facility’s 26 miles of roads. The robots, guided by remote computers using WiFi, will deliver cargo to trucks parked outside the container storage yard. 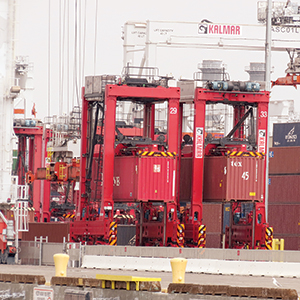 Autonomous straddle carriers operating at the Port of Los Angeles in 2018. Over the next three years, 100 straddle carrierswill replace 200 existing cranes and trucks operated by some 500 unionized dockworkers. (Seth Clevenger/Transport Topics)

They are expected to slash average turnaround times to an estimated 35 minutes for some 4,000 trucks that enter the terminal daily. In September, Maersk had the ports’ worst average turn times, averaging 96 minutes.

Maersk’s facility is not the first of the twin ports’ 13 terminals to introduce robots. Two smaller sites — the Long Beach Container Terminal, also known as Pier E, and TraPac, at the Port of Los Angeles — have largely automated over the past five years. Both now have the shortest cargo turn times at the ports, less than half those of Maersk’s APM.

For the 200,000 U.S. businesses importing goods through the San Pedro Bay ports — from such giants as Walmart and Apple to small factories and neighborhood stores — the speed with which their cargo moves from ships to trucks or trains, and on to consumers, is crucial. Trucking turn times are a key element of supply chain logistics as the ports, plagued by congestion, lose market share to East Coast and Gulf Coast rivals.

What with high labor costs and costly environmental regulations, the Los Angeles and Long Beach complex “is the most expensive in the U.S.,” Maersk’s Lagaay said. And now, with the widening of the Panama Canal, ports along the East and Gulf coasts of the U.S. are attracting more ships from Asia that have historically berthed in Southern California.

Automation, he said, will make his terminal “more competitive. If you don’t remain cost competitive, you lose business.”

To be sure, the truckers make more money by moving loads faster. But that’s not the only reason, he said. At automated terminals, “No one’s rude to them. The machines are more polite than the longshoremen.”

Tensions between truckers and dockworkers are “cultural,” LaBar added. “Most people in the ILWU are from families that have been in the union for generations. They wear a certain sense of pride. Whereas the trucking community is made up of a lot of immigrants, and English is their second language. They get treated really unfairly.” 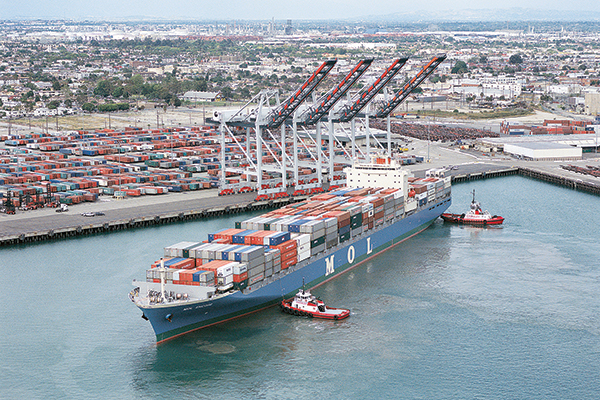 ILWU officials reject drivers’ claims that they are disrespected. They blame terminal operators, saying tensions result from technology glitches or from skimping on staffing. As they see it, cargo flow — and tempers — would be smoothed with more security guards to direct traffic and more clerks to service machine operators.

“If they’re upset at a crane driver because he’s not getting their can fast enough, they don’t know that maybe that crane driver’s computer screen gave him bad location,” said Ray Familathe, president of ILWU Local 13. “Now he has to call a clerk, but the terminal operator staffs one clerk for three to five cranes. The clerk says, ‘Hey, George, I’m on my way,’ but he’s servicing multiple cranes.”

As for dockworkers’ lunch and rest breaks, truckers would not object if they too were union members, entitled to similar privileges, ILWU officials contend. They trace the roots of resentment to the deregulation of trucking in the 1980s, which spurred a massive national shift from unionized trucker employees to independent contractors.

“Large corporations pit worker against worker,” said Joe Gasperov, president of ILWU Local 63, which represents the clerks. “I feel sorry for the truckers. They’re exploited. They’re paid by the load, not the hour, so they assume all the risk of terminal delays. And some companies care more about saving a buck than servicing the trucks.”

Cargo would move faster if terminals were willing to pay dockworkers for a third shift, he added. But under the ILWU contract, a third shift beyond the regular two eight-hour shifts requires premium pay.

Global forces are shaping the debate over automation and the tensions between truckers, dockworkers and terminal operators.

The rise of mega-ships and alliances between huge shipping firms to cut costs led to sharing vessels and terminals and what LaBar, the trucking executive, calls a logistics “nightmare.”

In the past, truckers picked up full containers, dropping off empty ones at the same terminal. Today, they race around the ports delivering an empty container to one terminal and fetching new cargo at a different terminal with operators often issuing confusing signals over where containers are located.

Nonetheless, drivers seem to direct as much ire at their fellow blue-collar workers as at terminal operators.

“You would think drivers would be empathetic towards the ILWU, but they’re not,” said William Flores, driver relations manager for Pacifica Trucks, a Long Beach company. “It’s adversarial. That’s the sad reality. Everyone is concerned about their own profitability.”

At a recent barbecue organized by truckers in Carson’s Victoria Park, Kristine Castanier, who owns three big rigs with her boyfriend, Anthony Vides, said she supports automation “because we wait hours and hours in long lines.” She blames the dockworkers, she said, because “they leave early to go to lunch and come back late.”

Moreover, she adds, some clerks “that guide us to get our loads are really rude. They think I’m on the wrong spot when I’m really not. I’ve been called the B-word a couple of times.”

I feel sorry for [dockworkers]. But honestly, they've been lazy.

Nearby, Marvin Estrada, who has hauled cargo at the ports for 12 years, was also looking forward to more automation. “If you’re offered a load from APM Maersk, nobody wants to go there,” he said. “Why? Because you take five, six hours to get in and out.”

As for dockworkers’ fear of robots, “I feel sorry for them,” he said. “But honestly, they’ve been lazy. If it’s hot, they get more lazy. If it’s cold, they’re lazy. They’re paid by the hour, so they don’t care if they move a container in one hour or two hours.”

Familathe, the ILWU 13 president, suggests drivers blame dockworkers for delays “because we are the people they see directly in front of them. When you’re at a retail store trying to check out, you don’t go yell at Macy’s, you take your frustration out on the poor girl at the counter.”

Diaz, Castanier and Estrada, like many port drivers, say they choose to be independent contractors paid by the load because they can earn more than the $20 to $30 an hour that trucking companies pay employees. (That amounts to about half of dockworkers’ base pay.) They also oppose a new state law, AB 5, curbing the use of independent contractors.

The United Brotherhood of Teamsters, which supports the new contractor law, has been seeking to organize Southern California port drivers for a decade, arguing that they are too often cheated by trucking companies. But it has only succeeded in unionizing roughly 1,000 of the 13,000 drivers. Under federal law, only employees may join a union, not independent contractors.

ILWU officials argue that truckers also will be harmed by automation. Eventually, they contend, robots will slow down, rather than speed up cargo logistics overall, causing the Southern California ports to lose business. And if there’s less cargo, there’s less work for truckers, not just for dockworkers.

They cite a 2018 report by McKinsey & Co., “The Future of Automated Ports,” which found that while labor expenses decline “so does productivity,” due to “operational challenges — a shortage of capabilities, poor data, siloed operations and difficulty handling exceptions” when a robot needs a human to intervene.

Maersk, the world’s largest shipping company, declines to reveal the cost of revamping its Los Angeles terminal, but ILWU officials, after consulting with robot manufacturers, estimate the outlay at $300 million to $400 million. The capital expense, they say, is discouraging other Southern California port companies from automating.

“APM hasn’t been shy in saying it’s about reducing labor costs,” Familathe said. “But other terminal operators don’t have the open checkbook or the deep pockets of the richest shipping company on the planet.”

The ILWU has met with terminals across the twin ports and “crunched the numbers based on productivity,” he added. “I’m hearing from five of them that they won’t automate. The others are not saying anything.”