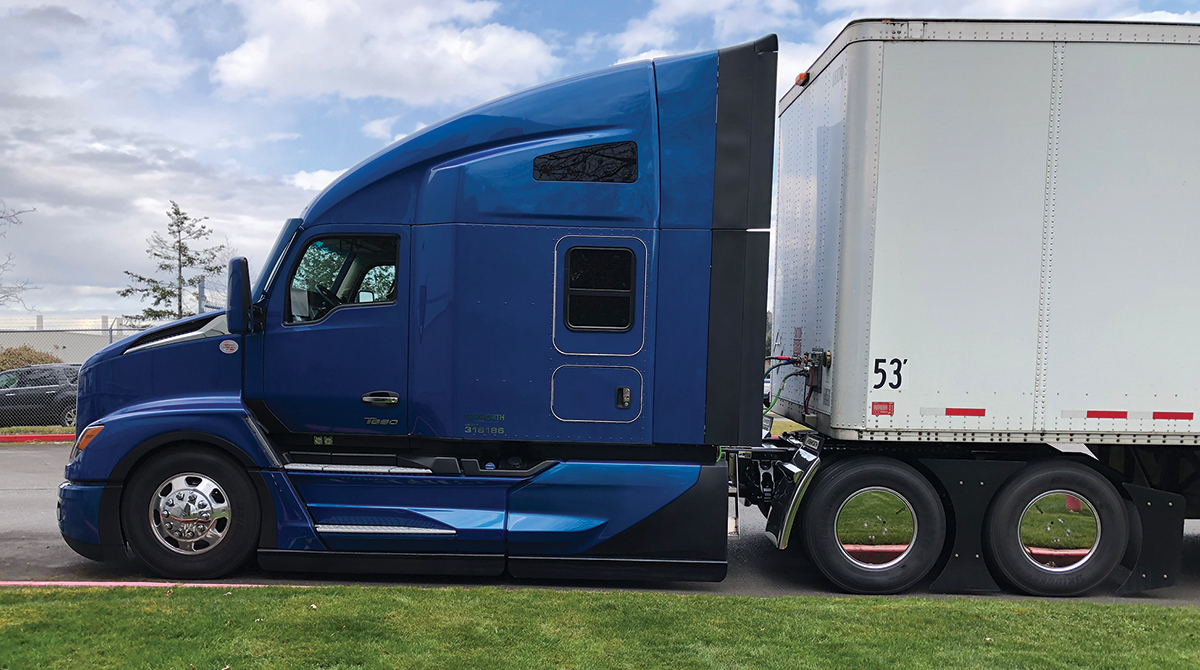 RENTON, Wash. — Kenworth Truck Co. spotlighted the aerodynamic and interior upgrades to its T680 Next Gen Class 8 during a small media event that began at its proving grounds here, then shifted to a 40-mile test drive during which both the day cab and highway models were on hand.

The trucks, unveiled earlier this year, are the result of a five-year program to improve fuel economy and add features to the truck, Kenworth representatives said during the March 18 event.

The T680 Next Gen models have a new hood with an 8-inch narrower grille to better cut into the wind, and tighter gaps between the fenders and tires to better manage air under the truck and the bumper. The side skirts extend down to within inches of the road surface. The lower section of the skirts is made of flexible material to reduce road damage.

The Next Gen Kenworth SmartWheel features driver-designed controls for the 15-inch Digital Display. Scroll between screens or to driver favorites view. Other functions are also at the driver’s fingertips helping keeps eyes on the road. #Kenworth #T680NextGen #TheDriversTruck pic.twitter.com/JBFtElqEIC

Cab side extenders have been lengthened to close the trailer gap. Either side extender can be hinged to provide access to the deck plate and air lines behind the cab, and new corner turning vanes are fitted to the A pillars beside the windshield edges, the company said. Outlets at the back of the fenders expel air streaming from under the hood. The goal, Kenworth said, is to keep air close to the truck.

“The T680 Next Gen hit our design goal of being sleek and sophisticated,” said Jonathan Duncan, Kenworth design director, at the event. “We wanted to focus on the aerodynamics, the technology and the refinement, and make the styling show that is a world-class, high-performance machine.”

For the one-hour loop around the southern and western sections of Renton — home to the Kenworth research and development center — both the day cab and 76-inch sleeper variants of the T680 Next Gen tested were equipped with Paccar’s 13-liter, 405-horsepower MX13 diesel, which produces 1,750 pound-feet of peak torque across a flat curve between 1,100 and 1,400 rpm. The engine is backed by the automated Paccar 12-speed transmission which, during the test drives, returned shift points at around 1,400 rpm. The T680 day cab pulled an empty trailer and the T680 76-inch sleeper carried 65,000 pounds GVW. 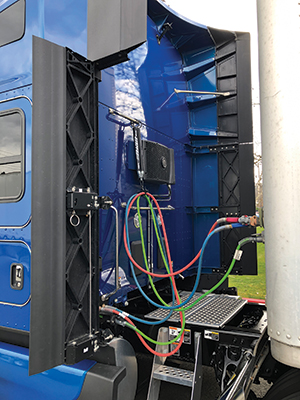 Cab extender is larger, so it needs a hinge for driver access. (Steve Sturgess for Transport Topics)

The T680’s downsped powertrain has a 2.64-to-1 rear-axle ratio, and a green band in the truck’s new digital dashboard spotlights the 1,125 to 1,400 rpm band that is the optimum range to realize the truck’s 6% improvement in fuel economy over its predecessor. That’s when spec’d with a 2021 Paccar MX-13 engine over a comparably spec’d T680 with a 2017 Paccar MX-13, Kenworth said. That new 15-inch customizable dash can be tailored to a driver’s preferences, and offers information such as current fuel economy as the speed limit of the road the truck is traveling on.

The company chose to offer a digital dash to give drivers the flexibility to personalize their dash, said Laura Bloch, Kenworth assistant general manager for sales and marketing, at the event. “With this screen-based instrumentation system, drivers can select the level of information detail they want to see, while the technology behind it lets us employ automation to show drivers what they need to see when they need to see it.”

The truck’s new steering wheel features an array of buttons, some related to functions on the dash. One permits the user to set a maximum speed for the truck, which could be helpful in areas where speed limits are reduced, such as construction zones. A row of switches along the lower dash to the right of the driver control a variety of functions.

The T680 Next Gen’s onboard safety systems include lane-departure warning and lane-keeping assist, which work in concert with an electric motor assist setup on the steering gear to gently return the truck to center lane should it stray. Called Torque Assisted Steering, the system reduces steering effort and enables more precise positioning to minimize steering wheel movements going down the road, Kenworth said. 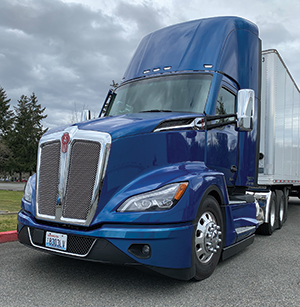 A day cab regional version of the T680 Next Gen. (Kenworth)

The 76-inch-high-roof sleeper features creative use of space and is one of several sleeper options for the truck; Kenworth also offers 76-inch midroof, 52-inch midroof and 40-inch flattop variants.

“The Kenworth T680 Next Generation has great innovations, new technologies and outstanding fuel efficiency, but this truck is all about the drivers,” said Bloch. “We built this truck around them and for them.”

The current T680 will initially remain in production and be sold alongside the new model.

The T680 Next Gen is set to begin reaching customers in May.