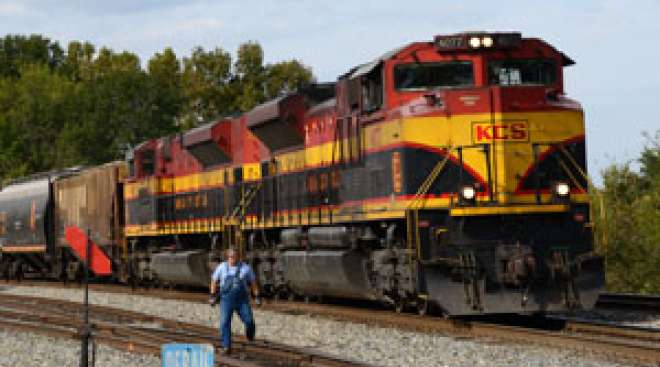 Kansas City Southern reported profits rose 36% in the first quarter, although the gains were lowered to a 12% increase after applying the exchange rate between the Mexican peso and the U.S. dollar.

The railroad company, which provides service in Mexico, earned $146.5 million in profits in the first quarter, or $1.38 per share. But after adjustments were made based on the foreign exchange rate, the total dropped to $124.1 million or $1.17. Nevertheless, the bottom-line results beat the $1.16 forecast, according to a Bloomberg News survey of analysts.

Revenue increase 8.3% to $609.5 million. Excluding the estimated effects of Mexican peso depreciation, revenue increased by 11% compared with the first quarter of 2016.

Before the U.S. presidential election in November, $1 equaled about 22 pesos, but now it hovers between 18 to 19 pesos. As a result, the pesos that customers paid to Kansas City Southern convert to fewer U.S. dollars than shortly before the election.

“Kansas City Southern is pleased with the return of year-over-year revenue and volume growth in first quarter 2017,”  CEO Patrick Ottensmeyer said. “We all remain focused on operational improvements and longer-term growth drivers and are excited to see some of these opportunities, such as refined products movements, materialize in 2017.”

Kansas City Southern increased profits due, in part, to a significant increase in volume and revenue for energy products such as coal, coke, sand for hydraulic fracturing and crude oil. The number of energy-related carloads jumped 30% to 71,700 and revenue surged up 64% to $69 million.

Intermodal, on the other hand, continued to struggle in the first quarter, unlike rivals CSX and Canadian Pacific. Volumes fell 1% to 224,000 and revenue dropped 2% to $83.5 million versus 2016 levels.

Volumes and revenue were relatively flat for industrial and consumer products, but up single digits for chemicals, petroleum, agriculture, and minerals.