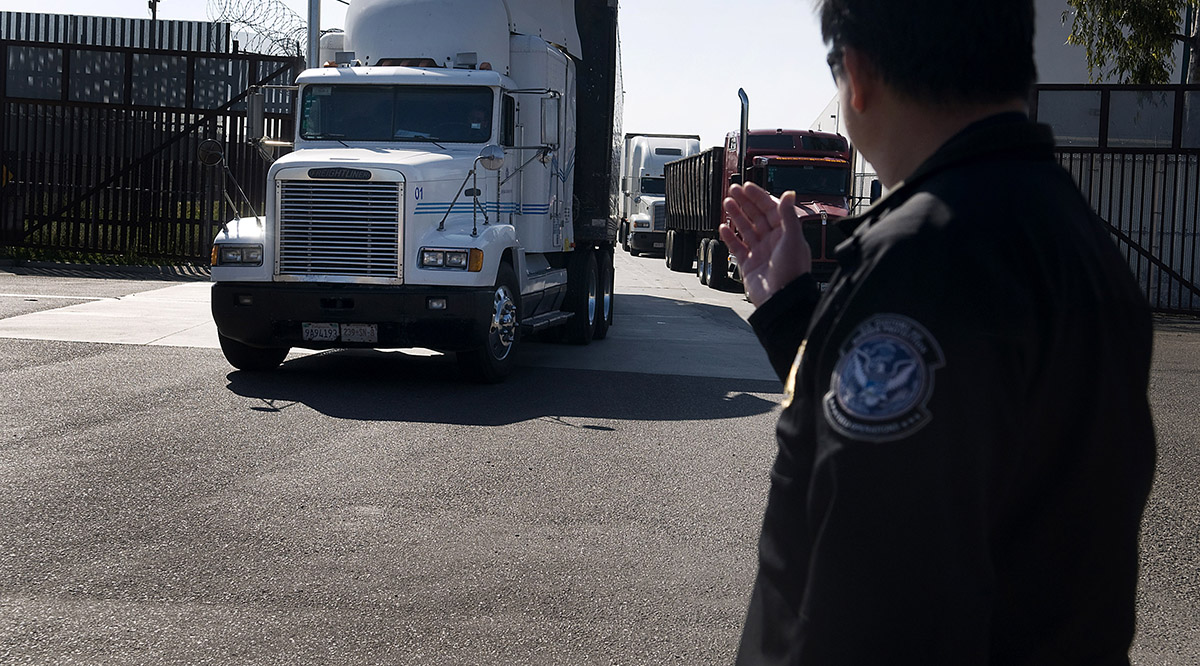 A maddeningly slow inspection process that can make crossing the border an ordeal lasting as long as six hours for trucks carrying cargo from Tijuana to San Diego soon could be dramatically speeded up.

The program is a first for Otay Mesa, the second busiest commercial port of entry on the U.S.-Mexico border. It will allow users enrolled in the secure-cargo shipping program known as FAST (Free and Secure Trade) to forgo outbound inspections in Mexico, and instead drive straight into the U.S. port to be inspected simultaneously by inspectors from both countries.

“You’re cutting inspection times in half, not to mention increasing the efficiency in the primary lanes and the wait times in between,” said Pete Flores, director of CBP’s San Diego Field Office.

The joint inspections started last August in Calexico, where U.S. and Mexican officers “are doing 200 trucks a day, and at times over 300 trucks in a day,” Flores said. “The relationship with Mexico is the strongest it’s ever been. It continues to get stronger for us.”

The close collaboration between U.S. and Mexican officials aimed at facilitating the flow of trade between both countries at the border comes in contrast to the rhetoric and uncertainty surrounding the current re-negotiation of the North American Free Trade Agreement, involving the United States, Mexico and Canada.

“Whether NAFTA is signed or not, these are operational efficiencies we need to have,” said Gustavo de la Fuente, executive director of the Smart Border Coalition, a binational group that promotes more efficient border crossings between Tijuana and San Diego. “This region should be at the forefront of these things.”

Under the traditional system, goods sent from Mexico to the United States must undergo two inspections, first as they leave Mexico and then again as they enter the United States. The joint inspections offer the promise of savings both in terms of time and money.

At a time of tight federal dollars for expanding ports of entry and hiring inspectors to process both people and goods, the program has been winning applause on the Arizona border where it was first launched last year at the Mariposa cargo facility in Nogales, and has since been expanded to Douglas and San Luis. In San Luis, the joint inspections now apply to all categories of cargo traveling and includes joint inspection of southbound shipments as well.

The program has drastically reduced wait times for commercial truck trade in Nogales—by as much as 85% percent, from three hours to thirty minutes.

“It has just been tremendous, everyone is delighted with it,” said Russ Jones, a customs broker and international freight forwarder whose company has offices in Arizona, California and Texas. “The efficiencies of this goes without saying,” said Jones, who is chairman of the Border Trade Alliance.

Though the past year has seen a dramatic expansion of joint inspections, the United States and Mexico have long been laying the groundwork for this to take place. Among those measures is “Joint Declaration on 21st Century Management” signed by the two governments in May 2010 and aimed both at promoting economic competitiveness and enhancing security along the border.

In October 2015, a pilot pre-inspection program allowed armed Mexican customs officers for the first time on U.S. territory to inspect southbound air cargo shipments at the airport in Laredo, Texas. The joint inspections there have now been expanded to include rail and trucks, according to CBP.

In January 2016, Otay Mesa became the first point on the U.S.-Mexico border to allow armed U.S. customs officers to work with Mexican counterparts in Mexico—in this case a pre-inspection facility for certain northbound agricultural products. But the traffic has been fairly light with inspectors processing about 10-12 shipments a day, Flores said, more than 20 on busy days.

Overall some 3,000 to 3,500 trucks cross northbound each day at the Otay Mesa Port of Entry, according to CBP. About a third are enrolled in the FAST program, and would benefit from the joint northbound inspections, Flores said. The exact date of the launching of these joint inspections has yet to be announced, but they are expected to begin sometime this month.

Many of those who stand to benefit directly from the program are members of Tijuana’s maquiladora industry, said Eduardo Acosta, a customs broker and president of the Otay Mesa Chamber of Commerce. Companies such as Foxconn, Toyota and Sony are eager to see the program start.

Trucking companies who carry the cargo are also eagerly awaiting the changes. “We’re hoping to start this as soon as possible,” said Alfonso Esquer, whose company, Fletes Esquer, crosses between 25 to 50 shipments at Otay Mesa—all through the FAST program. As wait times are reduced, “we’re hoping to move more loads with the same amount of equipment and personnel,” he said.

Esquer said under the current system, “we can go from one to three hours, easy,” to clear both Mexican and U.S. customs—even if his trucks are not pulled over for secondary inspection.

Jose Luis De La Fuente, the owner of another trucking company, Atlas, whose 34 trucks that specialize in short-haul movement of merchandise between Tijuana and San Diego, said the wait “can take five to six hours if you get pulled into secondary.”

Jones of the Border Trade Alliance sees joint inspections as a trend that will continue, and could even at some point be extended to passenger vehicles. And even with strains over NAFTA, such collaboration shows that on the border “it is business as usual, in spite of the rhetoric and positioning that we read and see.”