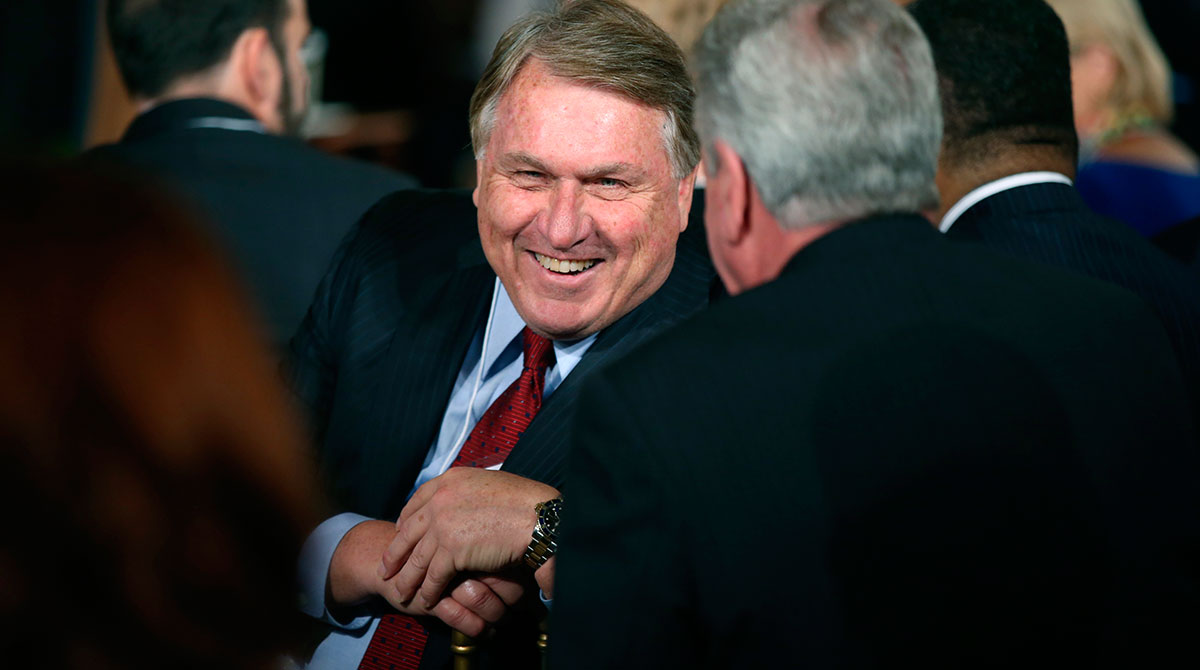 James Hoffa in 2015 by Andrew Harnik/AP/File

The International Brotherhood of Teamsters announced general president James Hoffa stepped down after 23 years in the post.

He is succeeded by Sean O’Brien, formerly the head of Teamsters Local 25 in Boston, and a critic of Hoffa’s leadership — calling it too soft in negotiations with UPS Inc. and Amazon.com Inc.

In a release, the Washington-based union said a key legacy of Hoffa’s tenure was building Teamsters power through aggressive organizing — aligning with established unions including the Brotherhood of Locomotive Engineers and Trainmen, the Brotherhood of Maintenance of Way Employes and the Graphic Communications International Union.

Moments ago: The #Teamsters Union starts a new chapter as Sean O’Brien is sworn in as General President and Fred Zuckerman takes the oath as General Secretary-Treasurer of North America’s strongest union. #1u pic.twitter.com/jZAn8ssRmf — Teamsters (@Teamsters) March 22, 2022

The release also noted when Hoffa took the helm at the Teamsters, the top hourly rate for a UPS package-car driver was $21.33. Today, that has nearly doubled to $40.85 an hour.

Teamsters freight truck driving jobs continue to be the best in the industry thanks to the package of benefits available, the union also noted, adding it “stepped up” when needed to assist drivers, including the negotiation of a plan that saved tens of thousands of YRC (now renamed Yellow Corp.) jobs in 2020.

The union also cited its work in helping scrap NAFTA, leading to the enactment of the U.S.-Mexico-Canada Agreement that, it said, put the concerns of everyday people at the forefront of the trade pact.

Meanwhile, there are 16 months before the Teamsters’ collective contract is set to expire with UPS, and O’Brien is already talking general strike if his demands aren’t met, Bloomberg News reported.

He’s counting on negotiating a UPS contract that he can hold up as a model to persuade workers elsewhere to unionize, including warehouse employees of Amazon.com, which is based in Seattle.

Atlanta-based UPS faces its toughest negotiations since workers walked off the job in 1997, with O’Brien outlining at least four strike issues he said need to be resolved to avoid a walkout next year. In addition to raising pay for part-time workers by a third and removing inward-facing cameras in trucks, he wants to eliminate a new class of driver created by the 2018 contract and stop the use of nonunion big-rig drivers, according to Bloomberg.

UPS Inc. ranks No. 1 on the Transport Topics list of the largest for-hire carriers in North America. Yellow Corp. ranks No. 8 on the for-hire list.

The 119-year-old union reported it has 1.4 million members in North America.

Hoffa will be recognized as general president emeritus going forward. He follows his father, James R. Hoffa, as the only former leaders to be honored with the designation.