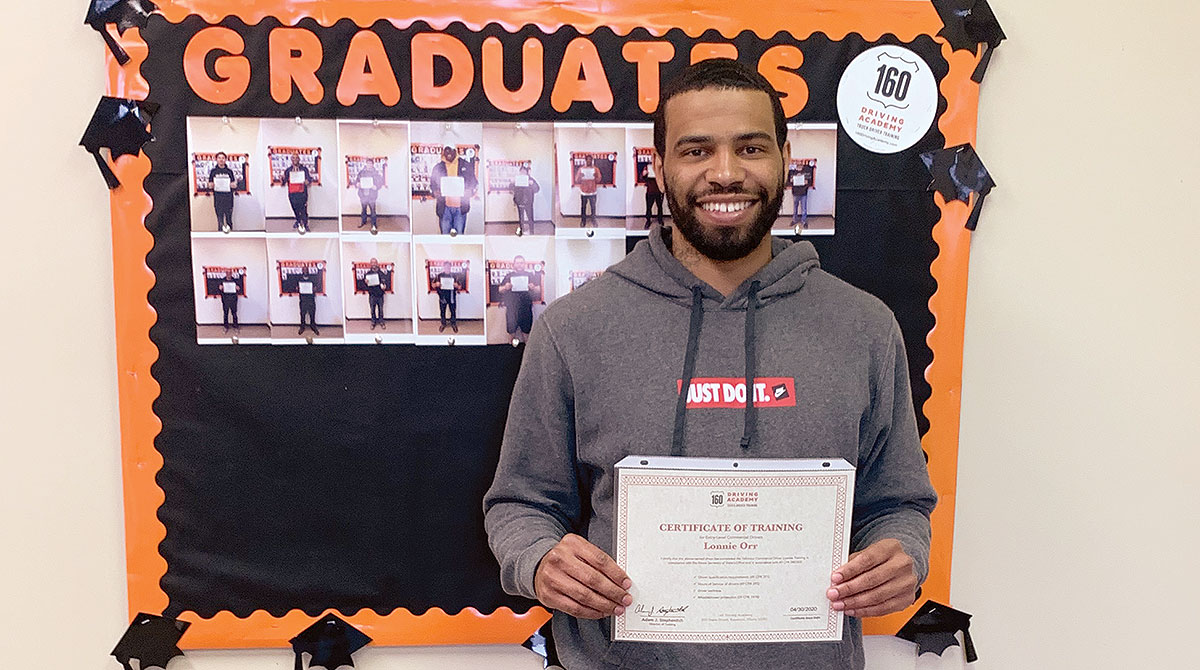 Lonnie Orr recently passed his commercial driver license skills test, but there was no Iowa Department of Motor Vehicles examiner sitting beside him in the truck’s jump seat, barking commands in his ear.

Instead, Orr, who lives in Davenport, was among the first drivers in the U.S. to take advantage of a federal emergency declaration allowing new drivers to maintain COVID-19 social distancing while having their driving abilities evaluated by a state examiner observing from a trailing vehicle.

With so many states closing their departments of motor vehicles, and driver training schools temporarily shuttered, the number of new drivers entering the market has slowed considerably, according to Steve Gold, owner of Illinois-based 160 Driving Academy, which has 72 schools nationwide. It is the largest commercial truck driving school in the U.S., graduating 9,000 students in a typical year.

However, enrollment will decline significantly this year due to the coronavirus, Gold said.

“Everything is just bottlenecked everywhere,” he said. “Obviously, some students want to make sure COVID-19 passes so they won’t be in a high-risk population. And we have some instructors who are nervous about coming to work. But the biggest challenge, by far, is that the DMVs have not been open.”

Which is why the Federal Motor Carrier Safety Administration on April 13 said that to ensure continued movement of supplies and equipment, states could leverage certain technologies to test drivers through June 30.

“Bluetooth, in-cab cameras and cellphones may be used to administer the CDL skills test in a way that allows the examiners to not be physically present in the cab of the vehicle with the driver applicant while conducting the on-road test segment,” the agency said.

Testing drivers alone in the truck, which apparently has been adopted by only a few states, has helped get drivers into the job market quickly, said Bill Bartelson, CDL quality assurance officer for the Iowa Department of Transportation.

After nearly three weeks, about 75 drivers have been tested using the new method, Bartelson said. Iowa learned of the protocol after speaking with the Kansas DOT, which he said is the first state to use it.

“We kind of borrowed their idea and ran with it. It’s a temporary solution,” he said.

“Right now, Iowa realizes the need in the industry for drivers,” Bartelson added. “Also, since we are an agricultural state, with spring planting coming on, there’s always an increased need for drivers for the farmers.”

Bartelson said the Iowa DOT has remained open during the crisis but has been unable to do on-road skills tests because it has no personal protective equipment such as masks or gloves to issue to examiners to allow them to sit next to drivers in the cab.

“We hope to get the masks in a few weeks,” he said. “Then we’ll resume testing in the usual way.”

Gold said that school instructors practice the new testing method with their students before taking the road test. Some recently graduated drivers have been intimidated at the thought of getting the test alone in a big rig, Gold said.

Not Orr, who graduated recently from a 160 Driving Academy school in Moline, Ill. After acing the test April 30, Orr dashed straight to the Iowa DMV to pick up his CDL.

“For me, being in the truck alone kind of helped a little bit,” Orr said. “I was kind of excited about being tested alone.”

Orr, 32, said he had to put on his cellphone speaker so he and the tester could communicate from each of their vehicles.

“The examiner would tell me where to turn and switch lanes,” he said. “I had to get instructions on everything I was doing. Plus, I had to tell when I was downshifting, what gear I was going to and keep within the speed limit.”

Orr said he has worked most of his life in factories and restaurants but recently decided to become a truck driver. “I heard the pay is good and the work is easy,” he said.

He has quickly found out that maybe the work isn’t easy, since most carriers in his area are looking for over-the-road drivers. He has been doing a few local jobs but said that with the nationwide shortage of truck drivers, there are great employment opportunities.