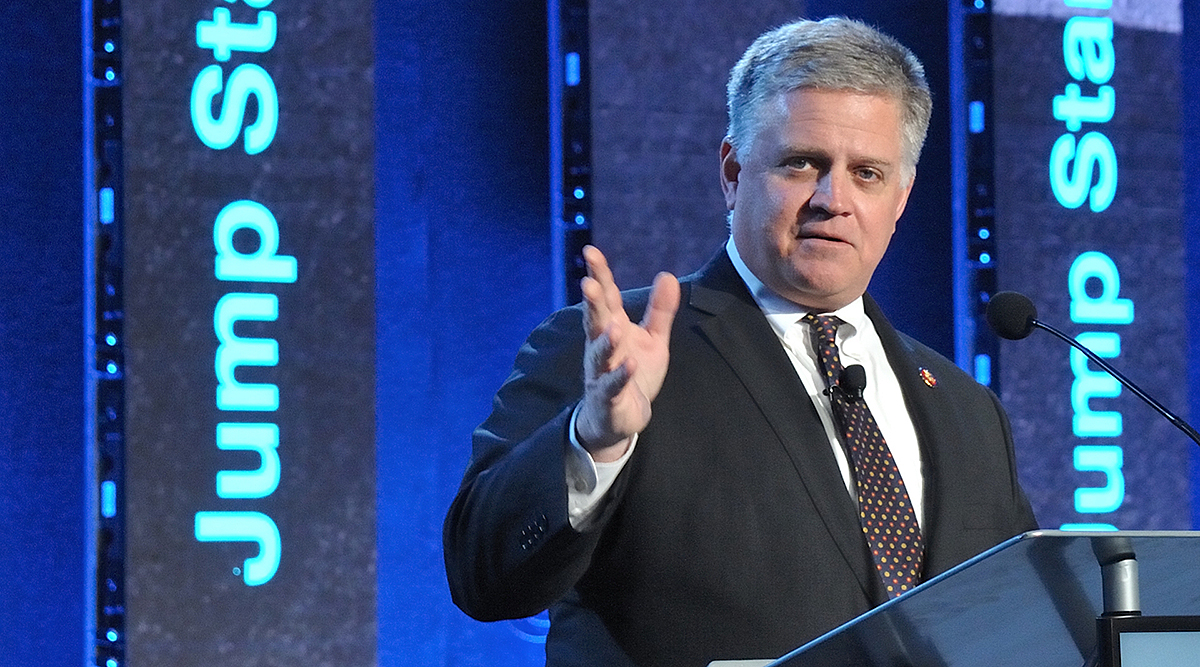 ATLANTA — A major new infrastructure bill is doable in 2019, despite the lack of new federal revenue to fund it, said U.S. Rep. Drew Ferguson (R-Ga.), speaking at the 28th annual meeting of SMC3 Jump Start on Jan. 28.

Ferguson painted a bleak picture concerning federal revenue, saying that 75% of federal revenue is spent before it even enters the U.S. Treasury Department. Then, as Congress receives more discretionary funds, further commitments such as defense pay factor in, eating up what is left.

Additionally, the federal budget system is confusing and broken, Ferguson said, adding a good infrastructure funding bill still has “many pathways to failure.”

The federal government is borrowing to compensate for spending it cannot cover, and a new federal infrastructure bill would have to rely on new revenue streams, said Ferguson, a member of the House Ways and Means Committee.

In fact, as Ferguson spoke, the U.S. Treasury Department took steps to fund the federal government’s budget deficit, making it the second year in a row that debt issuances would top $1 trillion, according to Bloomberg News.

Ferguson did not say how much a new infrastructure plan would cost but noted it was a priority of President Donald Trump and House Speaker Nancy Pelosi, (D-Calif.). Trump promised on the 2016 campaign trail that he would improve the nation’s roads, bridges, seaports and airports.

Some in the audience seemed impatient that the White House is not pushing infrastructure more aggressively and that Congress is not helping out on leadership.

“What are you waiting for Trump for?” one audience attendee asked Ferguson.

In 2018, other priorities bumped infrastructure out, Ferguson said.

New federal revenue streams could be gasoline taxes or tolls, he said. And Congress needs to find a way to make electric vehicles, which bypass the federal gas tax, help pay for roads.

One proposal that is not likely to be well-received is federal tracking of odometers, he said. Some states have floated the idea of taxing miles from year to year, but that means drivers have to turn in their odometer readings, and they will not agree to have their vehicles monitored by a chip that the federal government accesses, he said.

“That is not going to happen,” Ferguson said.

He also said infrastructure has a “sense of urgency” with federal leaders in the new Congress but that it would be a mistake to fund entirely new projects. Many existing roads and bridges need repair, he said.