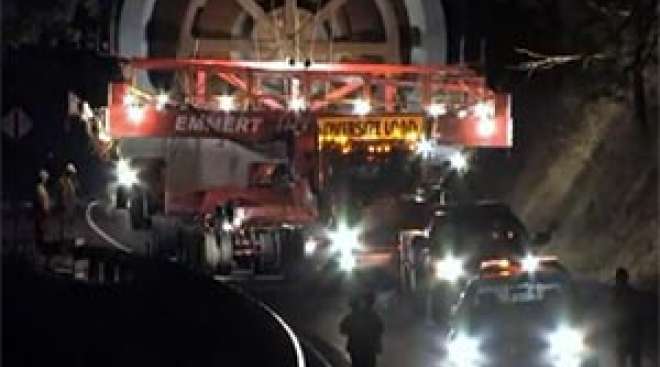 Megaload opponents are finding no reassurance in rules the Idaho Transportation Department has proposed to regulate the movement of the vehicles along a remote section of U.S. Highway 12.

More than 120 citizens and groups, including the Nez Perce Tribe, submitted comments questioning the timing of the agency's process or opposing the trucks that take up two lanes of traffic.

On the other side of the issue were the Port of Lewiston, the Idaho County Commission, a Lewis County commissioner, the Idaho Farm Bureau and fewer than 10 others.

The draft requirements would apply to loads that are more than 16 feet wide and 150 feet long, take more than 12 hours to travel from Kooskia, Idaho, to the Montana border or require modification of the road or adjacent vegetation. The Idaho Transportation Board will make a decision Nov. 17.

Megaload foes want to know why ITD is revising rules now when a temporary injunction in a federal court case bars megaloads on the route. The Nez Perce Tribe, Idaho Rivers United and the U.S. Forest Service are in court-sanctioned mediation to resolve the litigation.

Megaload backers believe that process is taking too long, a position mirrored in questions and answers about the topic ITD has posted on its website.

For three years, "There has been no apparent progress or resolution to the issue," according to a letter written by Lewiston Port President Mike Thomason. "The port believes it is time to move forward to resolve the issue in a manner that addresses the Tribe's concerns and allows commercial use."

The tribe and IRU disagree with that assessment. ITD was invited to the mediation in 2015, according to a letter from Nez Perce Tribal Executive Committee Chairman Mary Jane Miles. "While more cannot publicly be said, ITD's characterization of that mediation as one in which the mediation parties were or are not interested in pursuing a resolution, is simply not accurate."

Beyond the debate about whether ITD is trying to put pressure on the court case, the concerns are little different than those first raised in 2010, when plans for such shipments on U.S. Highway 12 became public.

Opponents worry about the risk of a megaload sliding into the river along the curvy, remote road that's anywhere from 20 to 30 feet wide.

"Federal litigation over the precise issue of megaload traffic implicates a type of traffic shipment so rare, extreme and uniformly harmful to the interests of all parties, including the state itself, that it frankly should instead call for a consensus-based agreement to ban such traffic from U.S. Highway 12," Miles wrote.

Foes also are concerned about traffic congestion. Megaloads have to pull over every 15 minutes to allow traffic to pass, ITD spokesman Adam Rush said via e-mail.

Enforcing that limitation can be a challenge, wrote Linwood Laughy, one of the most vocal opponents of megaloads. He said he has seen U.S. Highway 12 closed for 39, 55 and 84 minutes because of megaloads.

Megaload supporters argue concerns such as those are misplaced. "[U.S. Highway 12 has] been proven to be logistically, safely and ecologically traversed," William Stellmon.wrote. "It provides jobs and revenue to the area."