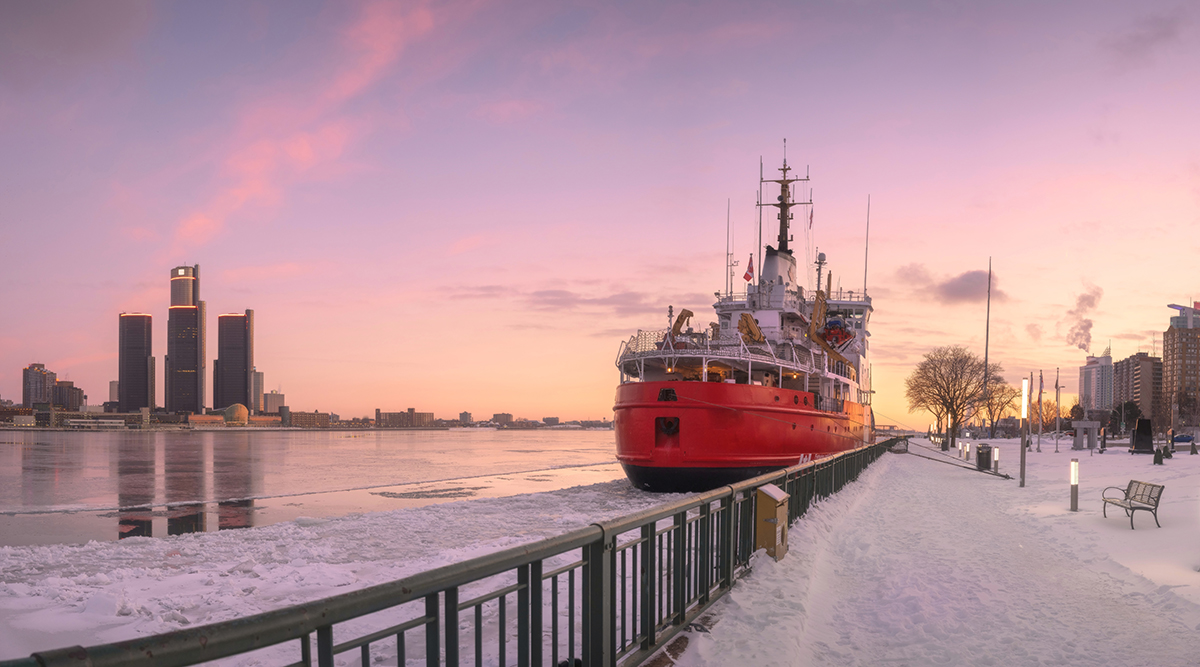 A Canadian Coast Guard Icebreaker vessel at dawn, with the skylines of Detroit and Windsor, Ontario, in the background. (Steven_Kriemadis/Getty Images)

CLEVELAND — The ice season is over on the Great Lakes, but the impacts of insufficient Coast Guard icebreaking linger.

During this year’s ice season, the U.S.-flag Great Lakes shipping industry lost the equivalent of a month due to delays in ice-covered waters. More than 1.6 million tons of cargo carrying capacity was delayed for 28 days due to ice conditions on Lake Superior, Lake Huron, Lake Michigan and in Green Bay. A lack of Coast Guard icebreakers hampered efforts to meet the needs of commerce.

“It amazes me that a cargo container stuck in Chesapeake Bay or in the Suez Canal gets worldwide attention, and that happens on the Great Lakes every year. The loss of one day of shipping is tremendous, but a month is devastating. Imagine if highways in the northern states didn’t have enough snowplows to keep traffic moving during frequent winter storms and sat on the road for a month. It is unacceptable,” stated Jim Weakley, president of the Great Lakes Maritime Task Force.

According to the National Oceanic and Atmospheric Administration (NOAA), ice conditions this past winter were “average” to “slightly below average” during the bulk of the icebreaking period. Several ships, including some Canadian-flag lakers, faced perilous journeys through ice-infested waters that nearly forced a vessel aground in the Straits of Mackinac and shut down waterways.

At one point, several vessels were stuck in eastern Lake Superior for more than three days. With an aging fleet of six 40-year-old small icebreaking tugs and only one heavy icebreaker, the U.S. Coast Guard couldn’t keep up. Multiple vessels were shoved near the edge of the navigational channels as ice floes over a foot thick shifted, which lasted up until mid-April. At the beginning of the ice season, the U.S. Coast Guard lost five icebreakers to engineering casualties, just when they were needed most.

“The Coast Guard needs more icebreakers on the Fourth Sea Coast. We have 237,000 jobs depending on a reliable Great Lakes Navigation System. In addition, our sailors deserve to feel safe navigating our waterways regardless of the time of year,” said John Baker, International Longshoremen’s Association and Vice President of the Great Lakes Maritime Task Force.

While progress fixing the icebreaking issue has been slow, it is moving forward thanks to key Great Lakes senators and Congressional representatives. Over the past year, both the current commandant of the U.S. Coast Guard and the nominee to replace him testified before the Senate Commerce Committee, acknowledging the need for another heavy Great Lakes icebreaker.

In addition, the Great Lakes Winter Commerce Act has passed the House as part of the Coast Guard Authorization Bill, which authorizes full funding for the new icebreaker, mandates transparent and accurate performance measures, and commissions a study by the Government Accountability Office to examine the impacts and needs for additional U.S. Coast Guard icebreakers on the Great Lakes.

US Shoppers Find Some Groceries Scarce Due to Virus, Weather