I-5 Reopens With Restrictions in Fire-Ravaged California 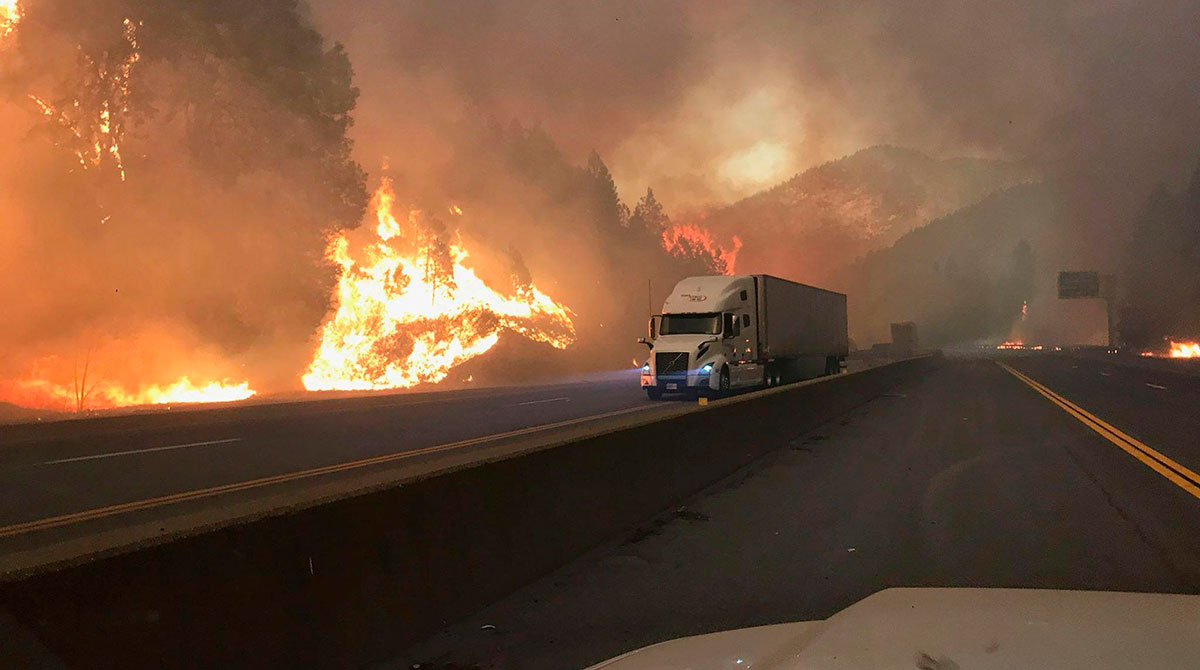 A tractor-trailer drives next to the Delta Fire burning on Interstate 5 near Shasta-Trinity National Forest, Calif. (Ben Newburn/U.S. Forest Service via Associated Press)

An extended stretch of Interstate 5 in Shasta County has reopened with restrictions after five days of closure caused by the raging Delta Fire, which has ignited big rigs and cars, injured at least one person and consumed more than 49,000 acres as of Sept. 10, according to the U.S. Forest Service.

The California Department of Transportation, as well as the California Highway Patrol and local law enforcement agencies, announced that the 45-mile stretch of I-5 between Redding and Mount Shasta, closed since Sept. 5, had been reopened as of 8:30 a.m. Sept. 10.

There are restrictions in place, though. A 17-mile stretch of the reopened freeway is reduced to one lane in each direction. Roads are open to through traffic only, meaning ramps to and from I-5 in affected fire areas will be regulated by CHP and Caltrans, according to a news release.

Additionally, no flammable vehicles — such as those containing logs or lumber — will be allowed through; they will be screened northbound at Fawndale Road and southbound at Mott Road, Caltrans said in a news release. Those vehicles will need to continue to use the Highway 299 detour.

Caltrans still warned motorists in the Sept. 10 announcement to expect long travel times and significant delays. A day earlier, Caltrans tweeted that the stretch of freeway would remain closed indefinitely.

Reports by California Highway Patrol officers and other drivers last week estimated that the designated detour route, Highway 299, had added about eight hours of travel time due to severe congestion.

The blaze, which started Sept. 5 about 10 miles north of Redding near Lakehead, has burned 49,874 acres and was 5% contained as of 7:58 p.m. Sept. 10, according to the U.S. Forest Service’s Shasta-Trinity National Forest unit. The blaze is expected to be fully contained by Sept. 22.

The fast-growing fire forced more than a dozen truckers and other drivers to abandon their vehicles on the freeway last week, CHP officials said.

Fire officials expected the situation to be “moderate” early Sept. 10 as smoke from the Delta Fire shades the burning areas, but fire behavior could become “active” once that shade breaks, according to the incident report the night of Sept. 9. Burnout operations continue along the north and northeastern edges of the fire, the report said.

Mandatory evacuation orders were still in place as of the morning of Sept. 10 for Shasta County residents along the I-5 corridor from Exit 707 at Vollmers north to Exit 714 at Gibson, as well as for residents in Trinity County from East Fork Road to Ramshorn Road east to the county line. Evacuation advisories also are in place nearby. Two evacuation centers are active, at Mercy Oaks in Redding and at the National Guard Armory in Mount Shasta.

The latest evacuation information can be found on Shasta-Trinity National Forest’s incident page.

About 2,400 fire personnel among were assigned to the Delta Fire as of the night of Sept. 9, according to the U.S. Forest Service.

The Delta Fire started the afternoon of Sept. 5 and erupted to 5,000 acres the same day. Officials believe it is human-caused, according to the official incident report, but no other details are known about the fire’s origins.

A number of schools in Shasta County were closed by the end of last week due to smoke, the Record Searchlight reported Sept. 7.

A U.S. Forest Service temporary air quality monitor registered readings in the “very unhealthy” to “hazardous” range over the weekend, with conditions at their worst around noon Sept. 7 through Sept 9.

The nearby Hirz Fire, also in Shasta County, has burned through 46,150 acres and was 97% contained as of Sept. 10, Shasta-Trinity National Forest said in an update.

Electrifying California Cars Could Crush the Grid, or Save It