For Hire on eBay: Trucker Driven by Passion for Service

The driver shortage issue may be a thorn to the trucking industry, but it puts drivers in a bit of a power position to make their services available to the highest bidder.

One particular driver is doing that literally, advertising himself on the online auction site, eBay.

“Truck Driver, 4.2 Million Safe Miles, Proprietor of a Public Charity” is the headline on an eBay item up for grabs. As of midday Sept. 22, the item had a high bid of $2,000.

Over-the-road driver Bill Hutson, who says he has 36 years of accident-free driving and no moving violations, got the idea to auction himself off because he already gets 10 to 15 offers a month. His eBay ad seeks an annual salary of at least $75,000.

“It would have to be a real good offer, because I’m pretty happy where I’m at now,” says Hutson, 54, of Reelsville, Indiana, which is west of Indianapolis. Hutson drives for Evoqua Water Technologies, but the six-day, 70-hours-a-week job doesn’t leave him much time for his other passion, which is operating Table Talk Ministries, a nonprofit charity that makes free home repairs for the elderly and disabled.

Hutson started the ministry 13 years ago and says he has completed 300 projects in 12 states at an estimated cost of $500,000, a large part of which he has paid for out of his own pocket. He also takes donations from construction companies and has received some grant money as a nonprofit 501(c)3 organization.

He has earned several community service awards for his charitable work, including The Jefferson Award for Public Service, and been recognized in several news stories.  “Every time they do a news story on me, I get 25 offers shortly after those air or come out in print, so I thought I would give this a try,” he said of the eBay idea. 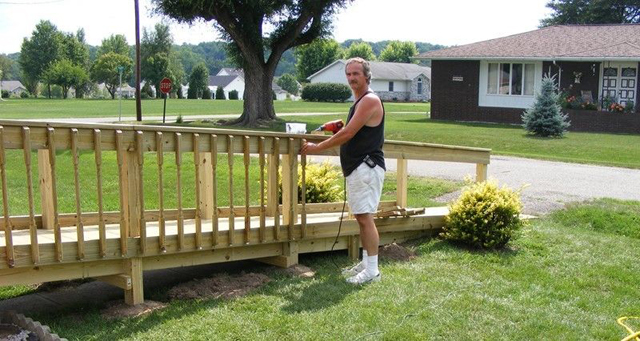 Hutson started working in construction at 15 and driving a truck at 18. He said the ideal offer would come from a trucking company that would allow him to reduce his driving hours so he could devote more time to his charity.

The fleet with the winning bid would be getting more than a driver, though. His eBay ad offers help “with philanthropic endeavors which align with the mission of Table Talk [and] help with renovation of employee housing or similar work.”

Oh, and the item also comes with free standard shipping.