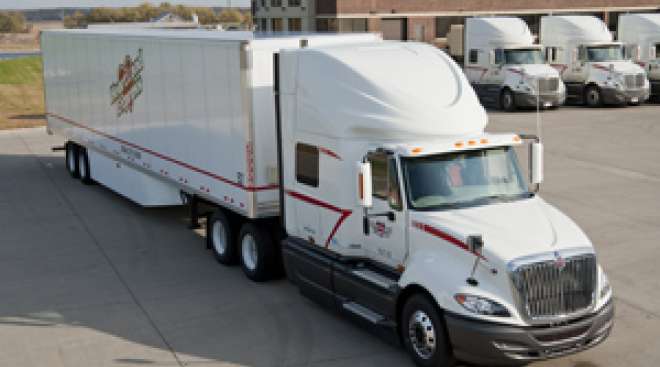 Heartland Express said its fourth-quarter profit fell from a year ago, though its revenue improved.

Revenue — which was negatively affected by a $4.1 million decrease in gains on disposal of property and equipment — rose 3.8% to $136.2 million, the truckload carrier said in a statement.

As of the end of the year, Heartland’s tractor fleet’s average age was 2.4 years old, with all of the fleet 2010 models and newer.

Heartland took delivery of 225 new trucks during the fourth quarter — including International ProStar Plus and Freightliner Cascadia models — and said it would take an additional 675 new trucks in the current quarter to complete its fleet upgrade.

The carrier also improved its trailer fleet age to 3.1 years as of the end of the year, down from 4.1 years a year earlier, and said it took delivery of 1,864 new Wabash trailers during the year, including almost 900 in the fourth quarter.

Heartland Express is ranked No. 47 on the Transport Topics 100 listing of U.S. and Canadian for-hire trucking companies.