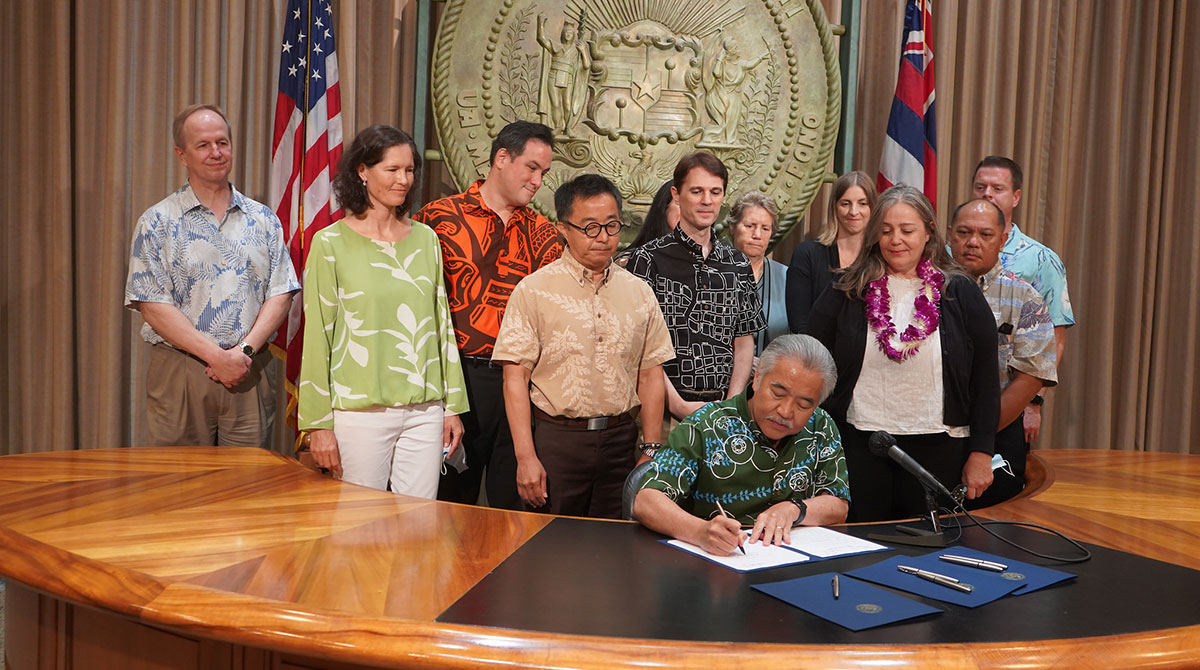 Providing incentives for trucks to use hydrogen is one of four new laws that took effect in July to counter climate change and boost clean energy in Hawaii.

Gov. David Ige signed into law bills to promote his goal of transforming the state as soon as possible into a clean energy economy.

Approving the legislation July 5, Ige described himself as proud to sign the four bills into acts to help ensure Hawaii “continues to move forward as a national and global leader in creating the strategies necessary to achieve a clean energy economy, being more energy efficient in state government, clarifying how we measure progress on renewable energy and creating incentives for emerging  hydrogen technologies."

The state public utilities commission is tasked with accepting applications and giving priority funding to those that are available to the public, serve multiple tenants, employee or customers, or are EV vehicle fleets.

Rebates for $200,000 will be available for eligible facilities that install new or upgrade existing fuel capacity for hydrogen fueling systems that only store or dispense renewable hydrogen. To be eligible, the hydrogen systems must be installed or upgraded after Dec. 31 and applications must be submitted to the public utilities commission within a year from the date the facilities are placed into service.

“Bringing liquid hydrogen to Hawaii will probably be very expensive; at the moment there is only one prototype ship that can transport it,” Kass said, representing 100 members. She noted that both hydrogen fuel stations and hydrogen are expensive, while electricity is wasted during energy production.

Act 238 (House Bill 1800) focuses on climate mitigation by establishing a statewide goal limiting greenhouse gas emissions to at least 50% below 2005 levels by 2030. A report is to be submitted to the Legislature by Dec. 31, 2023, indicating the measurement of 2005 greenhouse gas emissions, including those arising from airplanes. Also an annual emissions inventory report, starting after 2017, will be used to track emissions and the state’s progress. The act calls for the state energy office to recommend regulatory actions; ways to electrify or use alternative energy with air travel and shipping; how to lower transportation emissions; and accelerate adoption of energy-efficient and clean energy usage for residents, businesses and the government.

Due to a lack of statewide coordination of government facilities, Act 239 on energy efficiency (HB 1801) mandates all state facilities (except smaller ones) implement cost-effective, energy efficiency measures and directs the state energy office to collect all utility bills from state-owned facilities to make energy usage data publicly available. It also requires new state buildings to maximize energy and water efficiency and the potential for energy generation. It also stipulates that building materials lowering the carbon footprint be used in new construction.

In addition, Hawaii has now expanded the definition of its renewable energy portfolio standards to include a percentage of electricity generation through Act 240 (HB 2089). Excluding customer-sited fossil fuel generation, the act requires electric utilities to track and annually report data and trends on customer retention.