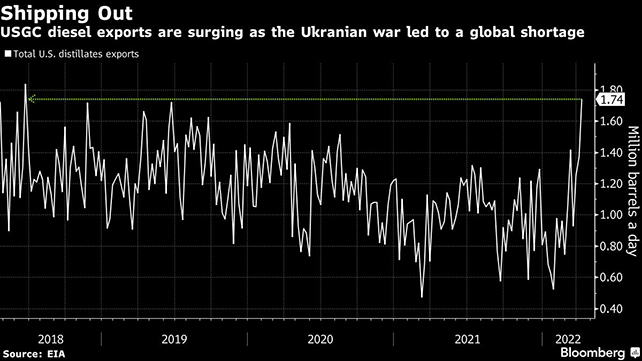 Russia’s invasion of Ukraine has set off a global scramble for diesel, prompting buyers around the world to snap up massive volumes of fuel from the U.S. Gulf Coast despite high prices.

Waterborne diesel exports from the U.S. Gulf Coast rose to 1.3 million barrels per day so far this month, on track to reach the highest monthly level since January 2016, when oil analytics firm Vortexa began tracking this data. U.S. government data show a similar spike, with weekly national diesel exports surging to 1.74 million barrels per day in early April, the highest since June 2018.

Rising demand for U.S. diesel underscores the extent to which Russia’s war in Ukraine has upended the global energy trade. Domestic supply is set to remain tight, underpinning high costs for the fuel that powers everything from trucking to agriculture.

Exports have risen even with diesel futures in New York — the pricing basis for cargoes — hovering between $3 and $4 a gallon over the past month, compared with below $2 a gallon a year ago. Prices have surged in the aftermath of the war, as Russia was a large exporter of the fuel, more so than crude.

Most Gulf Coast waterborne diesel exports have gone to Latin America in recent years, and that has continued this month with South America heading into the dry winter season, when some of the demand for hydropower typically shifts to diesel-fueled power generation. Europe also has ramped up its intake of U.S. diesel in an effort to wean itself from Russia.

High exports and consumption are draining distillates stockpiles in the U.S., which fell to the lowest level since 2014 in early April. The country’s diesel demand is expected to rise this summer from trucking and industrial sectors amid growing economic activity. American farmers, who use diesel to power their machinery, are planting the largest corn and soybean crop since 2017 this spring.

The U.S. Energy Information Administration forecasts diesel exports — including waterborne and overland via truck and rail — to average 1.3 million barrels per day this summer, a 38% increase from last summer.