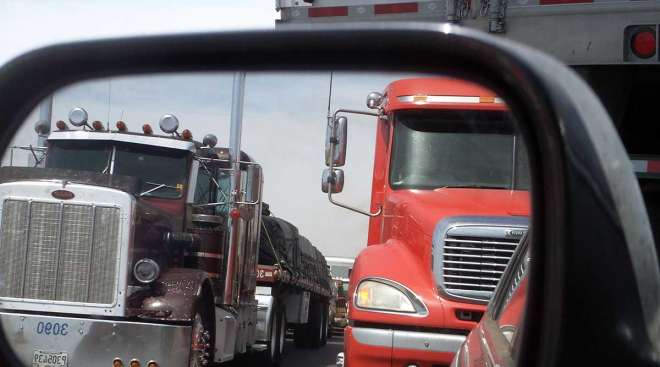 She said she planted shrubs to screen her property and worked with her Will County board representative Tom Weigel to get weight limit signs posted on Cherry Hill Road, to prevent truckers from using it to access the Cherry Hill Business Park, less than a mile south of her home.

When truck drivers ignored the signs, she said she flagged them down in the street and admonished them, with a "Can't you read?"

"I've been called names and given the finger," she said. "They said their GPS tells them to take this road."

She said she tried to convince the Will County sheriff's office to increase patrols and issue tickets to these drivers.

But with more and more warehouses opening up in the business park, the trucks kept coming.

Eken said she met with owners of these companies, urging them to tell their drivers to use designated routes. Only one complied, and she said she no longer sees those trucks on Cherry Hill Road.

It's a two-lane road, with no shoulder or sidewalk and "beautiful trees" — an area where moms push babies in strollers, with access to a local park and Old Plank Road Trail, Eken said.

She said she fears the truck traffic will diminish property values, which will hurt the schools, and no one will want to live here.

Eken was one of a few dozen people who attended the open house in New Lenox last week as Will County and the Will County Center for Economic Development sought public input on their Community Friendly Freight Mobility Plan. It was the last of three open houses hosted by the county, with two others held in Wilmington and Plainfield.

"There is a lot of concern with heavy truck traffic, and safety and congestion issues. It's not surprising. That was the impetus for this plan," said Ann Schneider, project director, former secretary of the Illinois Department of Transportation and former chair of the national freight task force. "People are passionate about this because it impacts their lives," she said. "Our major goal is to minimize the negative impacts while amplifying the positive ones."

The $1 million study — funded in large part with a state grant — will address how to keep freight moving efficiently throughout Will County, keep communities safe, and reduce trucks in residential areas.

Will County has seen a 138% growth in transportation, distribution and logistics employment in the last 10 years, far greater than any other region, according to Schneider.

With "unprecedented growth" in freight transportation, the county needs a plan to "understand what this industry means to our residents and our economy," County Executive Larry Walsh said in a news release. The plan will "help improve the quality of life for Will County residents and increase economic opportunity."

Truck traffic congestion has been most evident in the area surrounding the CenterPoint Intermodal Center in Elwood and Joliet, where trucks clog Route 53, I-80 and surrounding Will County roads. But it is also a concern at the Laraway Crossings Business Park, at Route 53 and Laraway Road, home to Amazon and IKEA, the Cherry Hill Business Park in New Lenox, and the still-developing Heritage Crossings Business Park on Gougar Road in Lockport and RidgePort Logistics Center off Lorenzo Road in Wilmington.

Many who attended the New Lenox open house traveled from Crete, where CSX has purchased land for a new intermodal facility between Crete-Monee Road and Goodenow Road, just west of Route 1, the scene of a recent double fatal accident involving a semi.

Concetta Smart, of the Concerned Citizens of Crete and the Surrounding Community that is opposing the CSX intermodal, said the existing roads can't handle the volume of trucks that it will bring.

"This isn't a community friendly plan yet," she said of the Will County plan.

Will County board member Laurie Summers, (D-Crete), wants to see the "Beecher Bypass," a proposed new route that would divert traffic off Route 1, from Goodenow Road to Route 52 or the Illiana – if that gets built.

"The infrastructure has to be in place (before the intermodal). If it takes longer – oh well. Let's do it right," she said.

Schneider and her team talked to truck drivers as well as residents in an effort to create truck routes "that make sense," she said. In some cases, it's a matter of getting streets registered as designated truck routes with the IDOT and putting them on GPS, she said.

Other routes will require infrastructure improvements — which is not an easy solution.

Once this study is completed, and approved by the Will County board this summer, it will identify freight corridors, and prioritize projects, and be used to partner and plan with other agencies, and make the county eligible for transportation grants and federal funding.

During three public open houses last week — in Wilmington, Plainfield and New Lenox — residents also listed their ideas on where truck traffic should not be, and how to make this plan "community friendly."

According to the New Lenox postings, there should be no trucks on Washington Street or Cherry Hill Road, Briggs or Mills Road, which all feed into the Cherry Hill Business Park, Nelson, Laraway or Delaney Roads in New Lenox Township, Francis Road in New Lenox and Mokena, Route 1 or Goodenow in Crete, or on Elwood's local streets.

Someone suggested improving the interchange area at Route 53 and I-80, while another recommended a county gas tax to pay for the needed improvements.

A "community friendly," plan would separate freight from residential, widen Archer Avenue between 143rd and New Avenue in Lockport, and mitigate noise and pollution.

Floyd Catchpole recommended building a bypass around Joliet, separating the trucks from the cars, to improve safety.

"I can't imagine what a nightmare it will be if they widen 80 without having a bypass," he said. "It would be complete gridlock if there were construction on 80 today."

Environmental factors were the concern of Ann Baskerville, of the Sierra Club.

The Illiana toll road has been proposed as an east-west alternative to I-80, which would run along the southern border of the Midewin National Tallgrass Prairie, on route 53 in Wilmington, she said.

It would "completely disrupt" that area, which has "great natural resources that are not replaceable," she said.

Kent James, who is co-managing this plan with Schneider, said Will County is the only one doing such a plan.

With 60% of its freight going beyond Will County to the surrounding region, this plan has "regional and national significance," James said. "It is important to tell Will County's story."

In meeting with truck drivers, trucking firms and residents, other issues have surfaced, such as traffic congestion, limited access to intermodal yards, lack of east-west connections and inconsistent permitting regulations, Schneider said.

This will become a holistic plan, addressing not just freight mobility, but land use issues, workforce development, employee housing and transportation and community livability, officials said.

Eken said she wasn't convinced that reiterating her concerns at the open house would make a difference.

"The only good thing [about the open house] is that I can vent," she said.