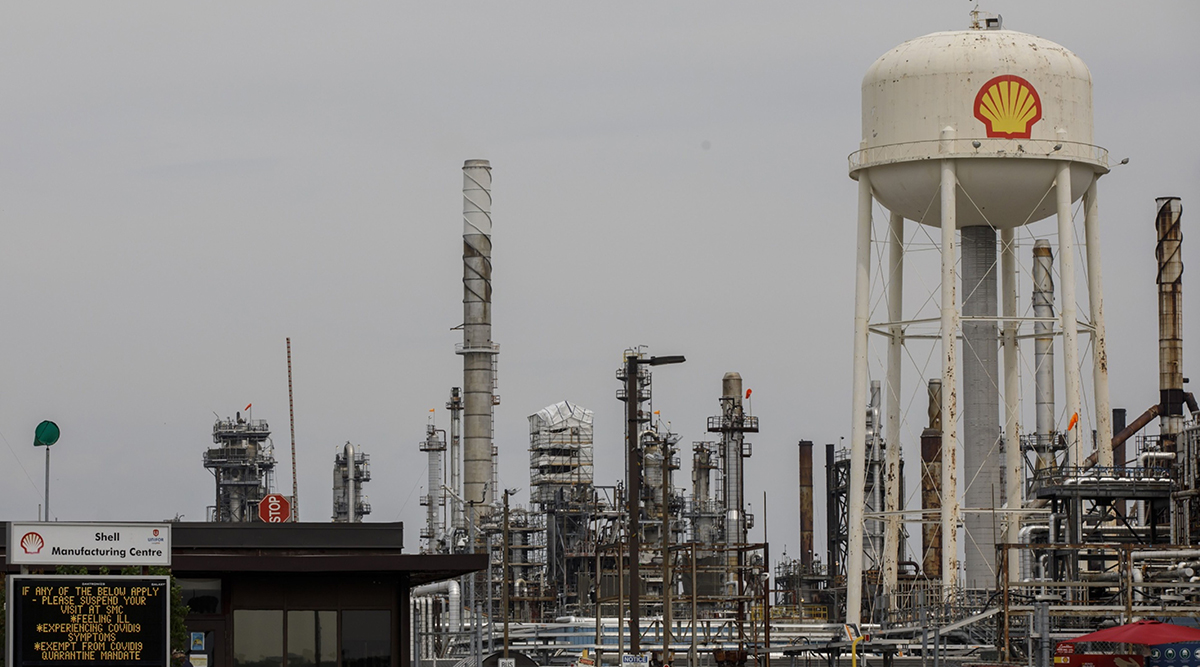 CLAYTON, N.Y. — Under an initiative announced at a United Nations climate gathering in November, preliminary plans are in the works for a “Great Lakes-St. Lawrence Seaway System Green Shipping Corridor Network.”

The announcement noted that the U.S. Department of Transportation, the U.S. Department of State and Transport Canada will work with state, provincial, local communities, private-sector and nongovernmental leaders, and Indigenous Peoples of Canada and the U.S. to host consultations with ports and other stakeholders. The goal: facilitating the establishment of a Great Lakes Green Shipping Corridor Network.

“It’s a grand initiative if they follow up with it,” said John M. Peach, executive director of the Clayton-based nonprofit environmental advocacy group Save the River. “There’s a lot of initiatives coming out of the COP27. What we have to see is, what’s the follow-through?”

“COP27” is the 27th Conference of the Parties to the United Nations Framework Convention on Climate Change, held in Egypt Nov. 6-18.

“I’d like to see more from them,” Peach said. “This is a pretty brief announcement of the initiative, and I haven’t seen a lot more.”

A joint statement issued by the American and Canadian embassy and consulates said that the Green Shipping Corridor Network builds on the work launched under the “Joint Statement by the U.S. Department of Transportation and Transport Canada on the Nexus between Transportation and Climate Change,” of February 2021.

The embassies said that green shipping corridors are a key means of spurring the early adoption of zero-emission fuels and technologies to place the shipping sector on a pathway to align with the goal of limiting global temperature rise to 1.5 degrees Celsius.

The 1.5 degrees Celsius (2.7 degrees Fahrenheit) target is the goal of the 2015 Paris Agreement, which calls for countries to take action to reduce greenhouse gas emissions in order to limit global warming.

“Through the Great Lakes-St. Lawrence Seaway System Green Shipping Corridor Network Initiative, Canada and the United States will work with industry to help facilitate the establishment of green corridors throughout the region, including by convening stakeholders and contributing to assessments and analyses relating to alternative fuels and power options within the system,” according to the joint statement.

Joel A. Brammeier, president and CEO of the nonpartisan and nonprofit Alliance for the Great Lakes, based in Chicago, said the Green Shipping Corridor Network is just one among shipping sustainability efforts in the last few years.

“The Great Lakes governors and provincial premiers have an effort to kind of reboot sustainability with shipping a couple of times,” Brammeier said Nov. 16. “Any effort to improve the sustainability is a good thing. This particular effort appears to focus quite a bit on fueling and carbon reduction, which is really critical.”

But he added there’s also a critical link that should not be overlooked.

“It’s important to note that a large part of the shipping industry, at least in the U.S., is really joined at the hip with the steelmaking and mining industries,” Brammeier said. “We’re talking about a carbon-intensive network of industries that the shipping industry supports. It’s going to be difficult to get a large carbon reduction without addressing that system. But any effort to improve the fuels that these vessels are operating on push into alternative fuels. That has been a challenge for the Great Lakes shipping industry.” 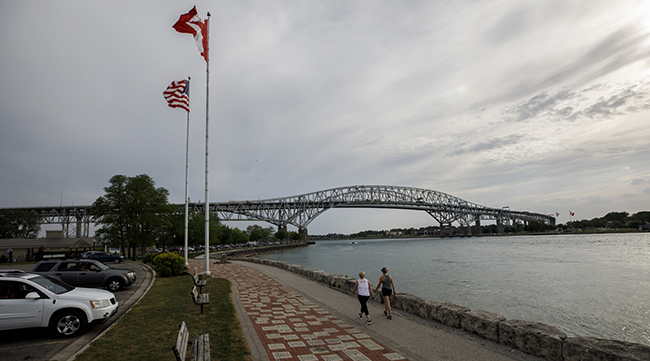 People walk along the waterfront near the Bluewater Bridge, which connects Canada and the U.S., near the Enbridge Line 5 pipeline in Sarnia, Ontario, Canada. (Cole Burston/Bloomberg News)

Brammeier compared it to a “chicken-and-egg question.”

“Are we going to move from diesel and heavy sulfur fuel to something like liquefied natural gas that requires a fuel infrastructure network, that doesn’t exist? But if the industry wants to be here for the long haul, it’s going to need to push toward that transition sooner than later.”

He added, “You have to look at the whole picture and consider how nested in these industries are with each other in the Great Lakes and what it needs to look like to really make a meaningful carbon reduction.”

Ports along the Great Lakes also could play a role in any workable sustainability plan, Brammeier said.

Through that cooperation, Brammeier sees potential for progress.

“I think there’s an opportunity here to look at ports differently — as parts of communities that can engage in a positive way with communities around them. That could mean workforce development, operating low pollution, low carbon and making sure the industries that are being enabled by shipping are ones that are sustainable within the community.”

The two governments view the Great Lakes-St. Lawrence Seaway System Green Shipping Corridor Network Initiative as an important element in “catalyzing” development of the fuels and infrastructure needed to make the transition to low- and zero-emitting shipping, and, on both sides of the border, creating the jobs to make the fuel available and infrastructure development a reality.

“It’s critical for us to look at what it means to operate in a healthy and sustainable way for the Great Lakes,” Brammeier said. 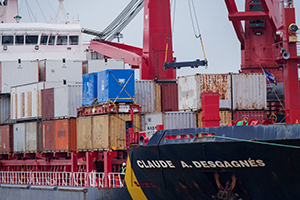 The Claude A. Desgagnes cargo ship sits docked at the Port of Rimouski on the St. Lawrence River in Rimouski, Quebec, Canada. (Valerian Mazataud/Bloomberg News)

As far as shipping-related effects on the St. Lawrence-Great Lakes environment, Peach continues to raise another issue he has steadily advocated.

“I’m even more concerned on the whole water ballast situation,” he said. “They’re not mutually exclusive. I keep hoping that through pressure from Congress and others, that eventually the EPA is going to step in and tighten up ballast water requirements.”

Ballast water discharges from ships contribute to the spread of invasive species. There are regulations in place, but Peach would like to see more.

“What I hear from the shipping industry is that they need to know what the requirements, regulations and specifications are going to be before they invest in their final ballast filtration systems.”

Brammeier said the EPA is expected to release new rules in regard to water ballast later this year or early next year.

In rules announced in June 2021, Canadian ships traveling abroad and those coming into Canada from abroad are required to meet certain standards by 2024.

“Invasive species has been the real stick in the eye for decades and we continue to be as aggressive as possible. Preventing the introduction and spread of invasives is critical,” Brammeier said. “That’s an ecological concern that’s right there in the faces of people who use the lakes every day. This bigger question — what’s the long-term will to create a sustainable shipping industry in the Great Lakes? I think the jury is still out on that.”