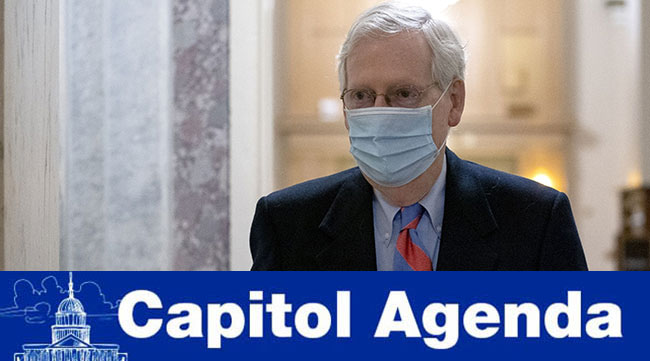 Senate Majority Leader Mitch McConnell says the medical system should not be denied additional financial support "for distributing the life-saving vaccines that appear to be on the horizon." (Stefani Reynolds/Bloomberg News)

It must still be somewhat astonishing to parts of the public how important legislative items before Congress’ two chambers (the House and the Senate) are often scheduled for consideration near the end of the year.

Take for instance legislation that would ensure funding for the government. With the federal government’s funding authority set to expire Dec. 11, lawmakers are expected to take up its fiscal 2021 funding legislation as early as next week. The funding matter could have been handled by or prior to its Sept. 30 original deadline.

The funding legislation is of importance since it’s meant to avert a partial government shutdown by advancing operational force for agencies related to transportation, the environment, the health care system, law enforcement, housing, education, the military and the economy.

Stakeholders, including transportation groups, are calling on Congress to advance its funding measure.

The House Appropriations Committee approved its measures in the summer.

Besides voting on funding legislation, members of Congress may discover there are a variety of matters on their post-election lame-duck agenda. One such potential item is a new round of COVID-19 economic aid. House Democratic leaders and Senate Republican leaders agree on the need for another emergency aid measure. However, they disagree on topline figures.

“We need to continue the funding for the vaccine, the delivery of the vaccine,” Sen. Roy Blunt (R-Mo.) said on CNN’s “State of the Union” on Nov. 29, adding an emergency relief bill to “direct money to struggling families would be helpful.”

Blunt echoed Senate Majority Mitch McConnell’s sentiment. The Kentucky Republican had affirmed, “Our medical system should not be denied additional support, including for distributing the life-saving vaccines that appear to be on the horizon.”

Days earlier, Speaker Nancy Pelosi (D-Calif.) told reporters, “The pandemic and the economic recession will not end without our help.”

Dec. 2, 10 a.m.: The Senate Commerce Committee considers the nominations of Greg Autry to be chief financial officer of the National Aeronautics and Space Administration, Daniel Huff to be assistant secretary of the Department of Commerce and Nathan Simington to be a member of the Federal Communications Commission.

Former Chicago Mayor Rahm Emanuel is said to be considered for the top job at the U.S. Department of Transportation.

When it comes to the U.S. Senate, Georgia is on the mind.

The American people, in states all across this country, and certainly in Wyoming, rejected this far left agenda.