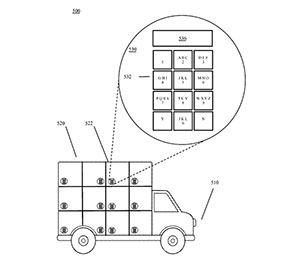 Google's “autonomous delivery platform" as seen in its patent.

Internet search firm Google has just received a patent for what it calls an “autonomous delivery platform,” in which a self-driving box truck is used to deliver packages kept in locked compartments and accessed by customers using a smartphone or some other secure electronic device.

While a spokeswoman for Google downplayed the significance of the patent, the idea provides yet another example of how technology can be used to automate the labor-intensive business of package delivery and provide a lower-cost alternative to current service providers.

“We hold patents on a variety of ideas,” Elizabeth Davidoff, communications manager for Google, told Transport Topics. “Some of those ideas later mature into real products or services, some don’t. Prospective product announcements should not necessarily be inferred from our patents.”

In its patent application, originally filed in 2013, Google noted that the two largest commercial delivery services in the United States together operate more than 100,000 last-mile vehicles — each of which requires a human operator and, in some cases, interaction with a person at pickup or delivery to obtain a signature or payment.

“The growth of business-to-consumer e-commerce, online shopping, for example, is expected to continue to increase the demand for delivery services, and hence the need for capacity and efficiency in the last mile,” Google said it its application.

Google’s proposed solution consists of an autonomous road vehicle, which can be a cargo van, minivan, pickup truck, panel van, platform truck, flatbed truck, refrigerated truck, tank truck and semi-trailer truck and car, outfitted with compartments to hold and dispense packages “akin to a vending machine” and connected to a computer network that can remotely monitor and control the entire delivery process.

Another company that is making a stab at automating delivery is Starship Technologies. Launched in 2014 by Skype co-founder Ahti Heinla, the European-based company is building a fleet of self-driving delivery robots to carry packages in urban markets.

The cost of using robots is 10 to 15 times less than current delivery services, the company maintains. “We want to do to local deliveries what Skype did to telecommunications,” Heinla said in announcing the start of production in November.

Meanwhile, Amazon.com and other companies continue to experiment with unmanned aerial devices, or drones, to deliver packages. Workhorse Group received approval last year to test a system called HorseFly to carry packages to and from electric delivery vehicles.