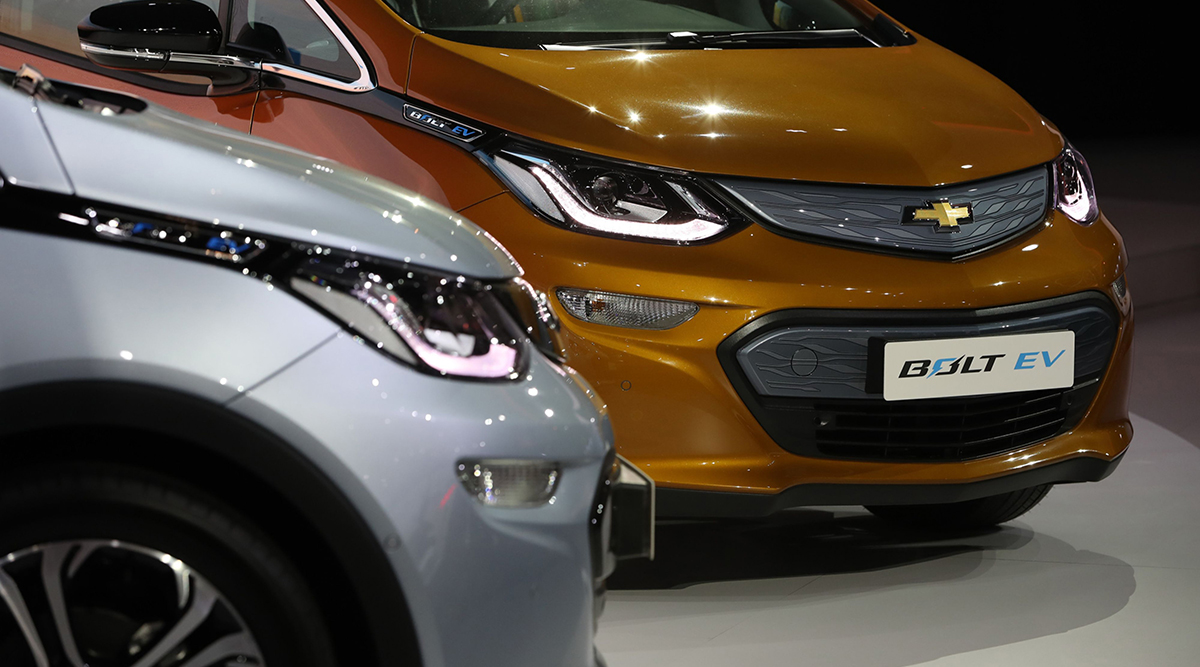 Chevrolet Bolt electric vehicles. GM had to recall all 143,000 Bolt and Bolt EUV models because of a manufacturing defect involving the battery that led to an increased fire risk. (SeongJoon Cho/Bloomberg News)

General Motors Co. said it reached an agreement with partner LG Electronics Inc. to recover from the South Korean company $1.9 billion of the $2 billion in costs for a recall of batteries in its Chevrolet Bolt electric vehicle.

The Detroit automaker said Oct. 12 it will recognize the recovery in its third-quarter earnings. GM had to recall all 143,000 Bolt and Bolt EUV models because of a manufacturing defect involving the battery that led to an increased fire risk.

GM will recoup nearly all of the costs of the recall, showing that CEO Mary Barra got the company’s battery partner to assume nearly full responsibility. With the settlement, both GM and LG can begin moving past the costly and embarrassing episode that had the automaker telling Bolt owners to limit how much to charge the car’s battery and advising them to park outdoors and 50 feet from other vehicles.

The two companies will continue to partner to make GM’s new EV batteries through a joint venture called Ultium. The jointly owned company is building a battery plant in Lordstown, Ohio, and will set up another in Spring Hill, Tenn.

“LG is a valued and respected supplier to GM, and we are pleased to reach this agreement,” Shilpan Amin, GM’s vice president of global purchasing and supply chain, said in a statement. “Our engineering and manufacturing teams continue to collaborate to accelerate production of new battery modules and we expect to begin repairing customer vehicles this month.”

LG Corp. companies said it would set aside 1.1 trillion won ($918 million) to cover costs related to the recall of the Bolt and moved to reassure investors concerned about a rift between the South Korean conglomerate and GM.

LG Energy said it will now resume the process of pursuing an initial public offering and aims to strengthen its partnership with GM. The recall costs had delayed IPO plans.

GM said in October that the two companies had come up with a solution to fix the manufacturing defects in the Bolt batteries and a plan to replace battery modules in the cars.

The two companies had examined burned batteries for months and found that a torn anode tab and a folded separator, which is supposed to keep the anode and cathode from touching, were the cause of the fires. Both defects needed to exist for a fire to start.

LG resumed production of new battery modules this month to replace defective ones and start building the Bolt again.

GM said that the company confirmed 13 fires and no fatalities.