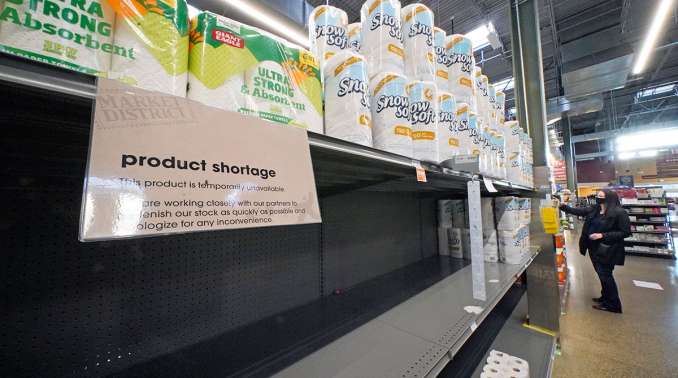 After a once-in-a-lifetime deadly pandemic, the world’s supply chains are realizing a new normal as industries meet the challenge of rebuilding and managing them in a post-­recovery era. At the same time, the transportation segment is facing a considerable increase in freight volumes as consumers continue to favor online shopping while demanding faster delivery options.

University of Minnesota-Morris transportation economist Stephen Burks ­noted the outlines of the economy are pretty straightforward, describing the recovery as V-shaped.

“It dropped like a rock and came back like a rocket, but coming back has been uneven, and the demand patterns are not the same as what it was before the downturn,” said Burks, who is also a former over-the-road truck driver. “There have been all kinds of glitches in the supply chain as both the final demand pattern has shifted and the supply chains are struggling to get back. Right now, in terms of demand for trucking, it’s high; there is huge demand with supply constraint in terms of trucks and drivers.” 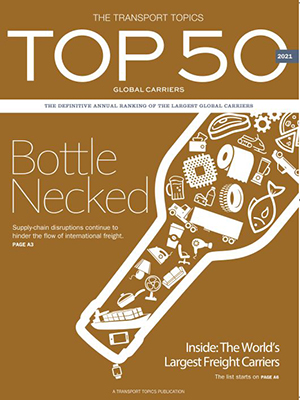 The latest trucking and logistics ­indexes from American Trucking Associations and other organizations show stressed, but maintaining, supply chain lines. However, the warning signs are flashing red as the holiday shopping rush is set to begin later this month.

By this time of the year, retailers usually have most of their inventory stocked, but major retailers are warning of shortages this season. Stores such as Costco and The Home Depot have announced plans to lease their own cargo ships to get items to the U.S. and Canada in an expedited manner.

“This is complicated. It seems like every time we find a path out of a disruption, another path is created for us,” Association of Supply Chain Management Executive Vice President Douglas Kent told Transport Topics. “Transportation is riddled with disruptions. Whether it’s port capacity on the shipper side from China or the receiving side from the U.S., the shortage of truck drivers and concerns about recruiting people into warehousing and transportation jobs, they continue to disrupt the industry.”

Officials say the worst chokepoint in the supply chain is along the Southern California coast, home to two of the nation’s biggest ports, Los Angeles and Long Beach. On Sept. 27, 64 containerships, up from 62 the previous week with millions of dollars’ worth of toys, electronics, furniture and other goods, lay at anchor waiting for an unloading berth. 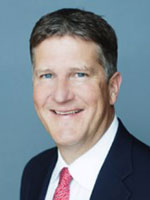 American Association of Port Authorities CEO Chris Connor noted that against the resiliency of COVID-19, port workers have been in a long, heroic battle to keep up with surging volumes.

“But COVID 19 doesn’t care about heroes, and as a result, port worker shortages did contribute to the congestion problems,” he said. “I think the port directors will tell you that the longshore workers have been a shining strength throughout this thing, but they can’t avoid the effects of COVID-19.”

Porcari recently toured the adjacent Southern California ports and announced the facilities are taking the first steps toward 24/7 operations. The Port of Los Angeles, the nation’s busiest, was taking steps in mid-October to begin operating 24/7. Long Beach planned to increase nighttime operations and eventually move toward a 24/7 supply chain as well. Both facilities said they would work closely with the trucking industry to ensure operators understand how to take advantage of incentivized gate hours and the expanded opportunities that will be created to move cargo during nonpeak times. 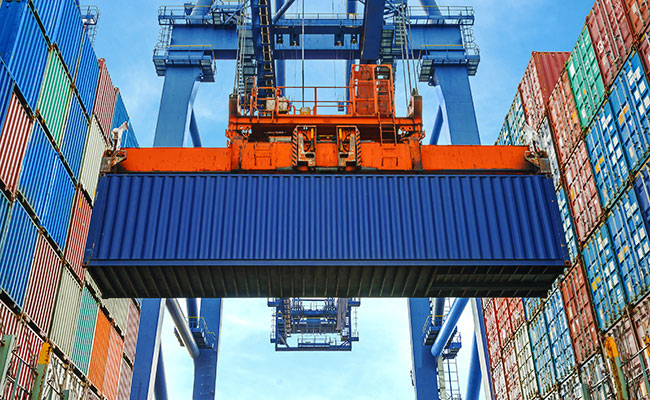 Containers being moved at the Port of Los Angeles. (Patrick T. Fallon/Bloomberg News)

Most of the nation’s major ports have seen their container volumes skyrocket during the past year. For example, Los Angeles now routinely processes nearly 1 million containers a month. On the East Coast, New York/New Jersey, Baltimore, Virginia, South Caro­lina and the Port of Savannah have had double-digit year-over-year increases since the cargo surge began a year ago.

The supply chain mismatch between the surging imports and an overwhelmed transportation network may slow down the economic recovery. Citing supply chain ­issues, the investment banking company Goldman Sachs cut its third-­quarter economic growth forecast from 6.5% to 5.5%.

“Spending on dining, travel and some other services is likely to decline in August, though we expect the drop to be modest and brief,” Goldman Sachs economists wrote, adding that supply chain disruptions are also proving to be more prolonged.

Their estimate is up to 6.5% growth from 5.5% for the fourth quarter, saying virus fears will diminish, the services sector recovery resumes, and inventories are replenished in 2020. 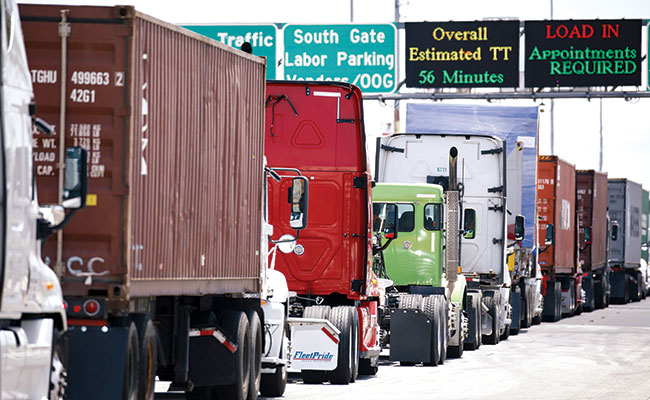 Trucks waiting at the Port of Los Angeles to pick up loads. (Patrick T. Fallon/Bloomberg)

“I think because of the virus, the state of the economy can change very quickly, and it is changing, and it’s downward,” said economist ­Rajeev Dhawan, director of the Economic Forecasting Center at Georgia State University. “I think if you had asked me this question a month ago, I would have said it was moving upwards. Remember, this virus is leading this economic tango.”

Real gross domestic product (GDP) increased at an annual rate of 6.6% in Q2 2021, according to revised estimates released by the Bureau of Economic Analysis in August.

After product is taken off ships, there are delays in reaching retailers and consumers. Warehouse space is exceptionally tight. ­National va­cancy rates are less than 5% and less than 2% near ports as shippers say they do not have enough space to store the goods.

“You have a tightening of warehouse capacity, but at the same point, are the goods that are in the warehouses the right ones?” Kent said. “The consumer is going to pay the price for this amount of disruption. Who can ignore the fact that when the supply chain is not working well, the consumers pay?”

Higher inflation at the retail level is another cost concern. A 20-foot container that cost $3,500 to import from China to the U.S. before the pandemic now may cost more than $10,000 for the same journey.

On Sept. 27, the Drewry World Container Index, which provides weekly assessments of container freight rates, said prices have increased for 19 consecutive weeks and are 351% higher than the same time a year ago. 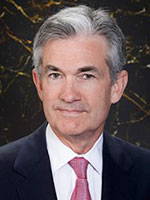 In remarks to the Senate Banking Committee on Sept. 28, Fed Chairman Jerome Powell warned the supply chain problems might fuel inflation longer than the Fed had earlier anticipated.

“Inflation is elevated and will ­likely remain so in coming months before moderating,” Powell said. “As the economy continues to reopen and spending rebounds, we are seeing upward pressure on prices, particularly due to supply bottlenecks in some sectors. These effects have been larger and longer-lasting than anticipated, but they will abate, and as they do, inflation is expected to drop back toward our longer-run 2% goal.”

Analysts and industry executives say there is little chance the federal government can untangle the cargo snarl before the holiday shopping season.

“I hate to be the Grinch that stole Christmas, but I don’t think it’s going to line up the way we’d like it,” Kent said. “Most of the items that get consumed during the holiday period have a manufacturing location outside the U.S. If you take a look at the big exports, it’s computers, bicycles, accessories, toys and the reality is this should be all clicking smoothly now, and a lot of those expectations now are being foiled. We’re seeing continued disruptions.”

Dhawan noted that there are delays in the supply chain, but consumers will still flock to big retailers like Amazon expecting next-day delivery. However for other retailers, even before the holiday season, expect low stock volumes and rising costs.

“The trouble you’re going to face this Christmas is that the retailers only have limited items,” he said. “What do you do if you have a limited supply? You raise prices, and that’s happening now.”