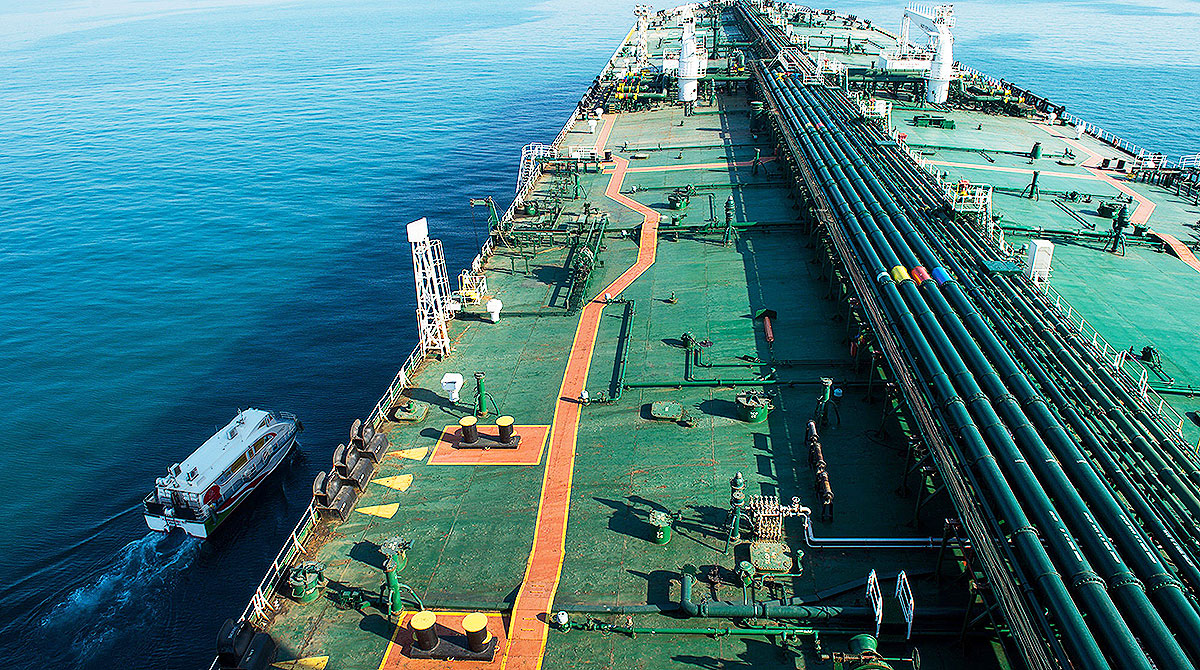 A view of the Persian Gulf from inside Devon, an oil tanker transferring oil to exporting markets. (Ali Mohammadi/Bloomberg)

Shippers have fewer than three weeks until new rules kick in forcing them to burn cleaner fuels, but the regulations are already redefining key trade routes in the global oil-product markets.

A historic flow of sulfur-rich fuel from northwest Europe to Singapore — the world’s biggest ship-refueling center — has all but dried up. Instead, a fleet of supertankers, including one of the world’s biggest, has now assembled near the island state with millions of tons of new, cleaner product on board drawn from suppliers across the world. Much of the supply that shippers no longer want is meanwhile getting sent to refineries in the U.S. for reprocessing.

The sulfur-busting rule is from the International Maritime Organization, the U.N.’s shipping agency, and it will force a sharp reduction in how much of the pollutant is in marine fuel from Jan. 1. The changeover requires a totally different type of propellant for most vessels, leading to a major reworking of the global supply chain, refining system and infrastructure. The new product needs to be available in the right places at the right time. And the old stuff, which most shippers can’t use anymore, needs to find a new home.

“There’s a mixture of worry, anticipation and opportunity,” said Spencer Welch, oil markets and downstream director at IHS Markit who worked for over a decade at BP Plc. For traders, “there’s great money to be made if they get it right. Likewise, there’ll be winners and losers.”

Most ships have long run on a product known as high-sulfur fuel oil, or HSFO. Essentially a residue from the refining process — jet-black, gloopy and pungent — it has historically been sent on large tankers from northwest Europe and the Baltic to East Asia.

But that trade is fast disappearing. Just 278,000 tons arrived in East Asia from northwest Europe and the Baltic in September, a drop of about 75% from a year earlier, according to oil analytics firm Vortexa. October also saw a sharp drop. In November, a single tanker — which may not have even been exclusively carrying HSFO — sailed the route, compared with about 1.4 million tons in the same period last year.

Prices of the product have collapsed to discounts of $20 to $30 a barrel below crude, having been closer to parity earlier this year, according to fair-value data compiled by Bloomberg.

While shipments of HSFO to East Asia from northwest Europe and the Baltic Sea region have fallen dramatically, U.S. refineries have been gobbling it up. October saw the highest volume of fuel oil arrive there from former Soviet Union countries since at least 2016, according to Vortexa. Much went to the U.S. Gulf Coast, a refining center that houses sophisticated plants capable of processing the material. The U.S. also recently imported fuel oil from as far afield as Jordan’s Aqaba, a phenomenon that Vortexa says hasn’t happened since at least the start of 2016.

As the old ship fuel’s trading norms change, fresh supply chains are meanwhile being forged for the new, cleaner alternatives. A flotilla of supertankers has built up off the coast of Singapore and Malaysia, holding about 4 million tons of IMO 2020-compliant fuel oil, according to Kpler. The supplies are from as far afield as Europe, Australia and Brazil.

People are placing their bets that it will go up in value and they can sell for more in the future, said Welch. “Traders are getting ready to do what they do best.”

Most shippers will be choosing between two main types of clean fuel to comply with the IMO’s rule, with the most prevalent likely to be a product known as very low-sulfur fuel oil, or VLSFO.

This new product will mostly be shipped from Europe to Singapore, with local producers in Japan and Korea further boosting supplies. Brazil will also likely send the product to Asia, according to Welch. The country’s November fuel oil exports were the highest since July 2006.

Shipping company Euronav NV, which has built up inventories of compliant fuel on the giant Oceania, also anticipates some supplies of the product moving to the U.S. Gulf coast from northwest Europe, according to a company presentation.

Part of the new supply chain already appears to have been established: Algerian supplies of a product called low-sulfur straight-run fuel oil, or LSSR, which can be used to make VLSFO, have increasingly been sent to Southeast Asia instead of the U.S.

The other main clean fuel that shippers can use to comply with the IMO’s rule is called marine gasoil, or MGO. While many analysts see it as secondary to VLSFO, a buying increase is still expected. Energy Aspects Ltd., a consultant, said recently that it expects about 1 million barrels a day more demand next year.

New trade routes for this product will almost certainly spring up, but forecasting them accurately is a fraught business, said Mark Williams, an analyst at Wood Mackenzie Ltd., an energy consultant. Marine gasoil is similar in specification to both diesel and heating oil — and even to some extent, jet fuel — meaning refiners have some flexibility in switching output between these products, given the correct price signals.

Asia will generally need more of these types of fuels going forward, known in the industry as middle distillates, Williams said. Most of that demand will be met by the region’s own refiners producing more, as well as less being exported, although imports will also rise, he said.

Nevertheless, it’s possible to make some broad assumptions. There’s scope for North America to export more diesel-type fuels — including marine gasoil — to Latin America and Europe because of the IMO’s rule, fuel-shipping company Torm A/S said in its most recent results presentation. Former Soviet Union countries could also ship more to Europe, as could the Middle East. Product from the latter region could also head to East Asia.

“Nobody knows what is really going to happen,” Welch said. “It’s almost standing on the edge of a precipice and getting ready to jump and not knowing where the bottom is.”