Fuel, Maintenance Among Many Variables for Total Cost of Ownership Calculations 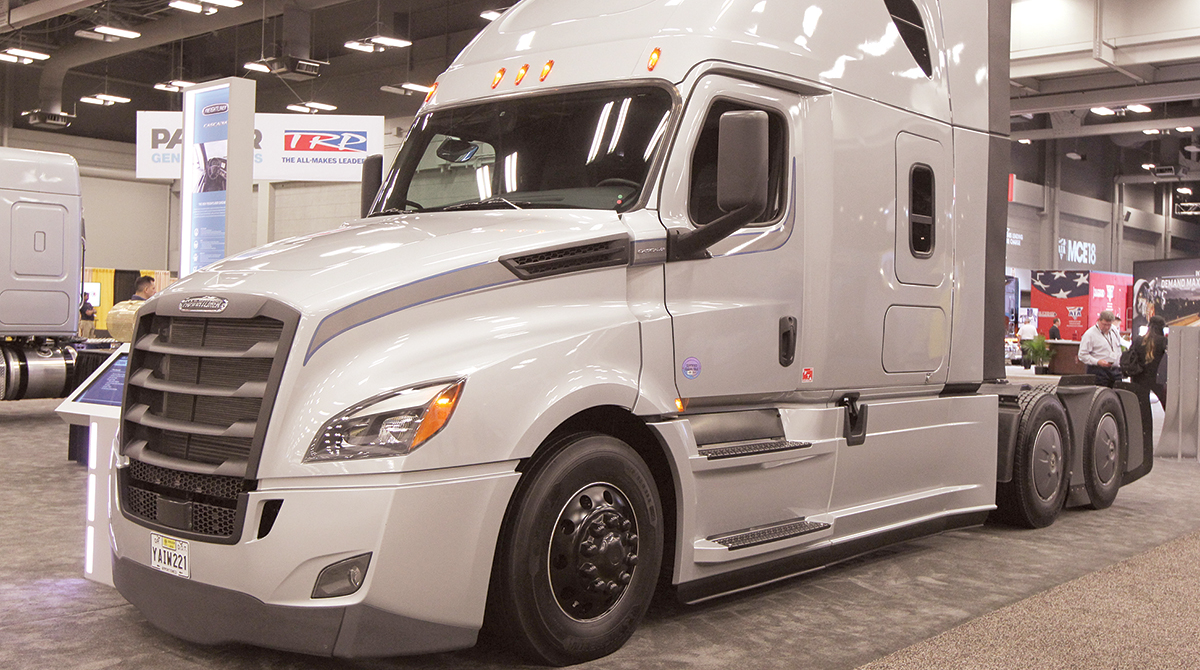 A Freightliner Cascadia equipped with a sleeper berth on display this year. Driver experience has become as important as any element of TCO, company officials say. (John Sommers II for Transport Topics)

How much did that truck truly cost?

Carriers aiming to answer that question — so they can decide what to buy next — must weigh a range of factors to arrive at a “total cost of ownership.” The factors considered might differ from one operator to the next, but the basic considerations tend to be the same, fleet managers and truck manufacturers said.

“I think certain companies are more sophisticated than others when it comes to defining [TCO], but generally you’re looking at acquisition cost, depreciation, fuel economy or fuel expense, maintenance expense, residual value — those are the general categories. It’s consistent and easy to benchmark that way,” said Kirk Altrichter, vice president of fleet services for Kenan Advantage Group, a North Canton, Ohio-based bulk carrier that runs about 7,000 tractors.

The price of a truck, its maintenance tab and its fuel mileage are the costs that Stephen Post pays closest attention to, with fuel mileage paramount. Post is vice president at WLA Trucking, a carrier based in Mount Airy, N.C., that operates a fleet of 65 tractors.

That is the case with many fleets, truck marketers and industry experts said.

Fuel used to be the No. 1 expense for fleets, now it’s drivers — driver recruiting, retention.

“TCO can be broken down into a full spreadsheet and covers many things,” Stu Russoli, Mack highway product manager, said via e-mail. “There are fleets and companies that watch this very closely and can tell you specific numbers” and their goals when purchasing trucks, he said.

“There are also many that do not know or track TCO,” Russoli noted. “They may know the price of their last truck purchase, maybe what the residual on their last trade or sale was and probably the fuel economy they are getting.”

Truck manufacturers weigh common factors that are widely recognized as essential to measuring total cost of ownership, but they talk about and present TCO for their equipment in different ways.

Dawn Rinehart, whose title is manager of TCO, works with “a handful” of Daimler Trucks North America’s biggest fleet customers to measure the effect that features and systems have on total cost of ownership.

“We developed some reporting [methods] with them and we analyze a lot of data” to measure fuel economy, uptime, maintenance, repairs and safety, Rinehart said.

Navistar, which builds International brand trucks, offers a “total cost of ownership calculator” on its website, where fleet operators can enter fleet size, average annual miles and predicted fuel economy for their application.

Jim Nachtman, Navistar’s product marketing director for on-highway trucks, said the equipment manufacturer uses the calculator to discuss with customers how to improve TCO. “If a fleet is facing higher driver turnover, we focus on features designed for driver satisfaction,” Nachtman said.

“Fuel used to be the No. 1 expense for fleets, now it’s drivers — driver recruiting, retention,” he said. 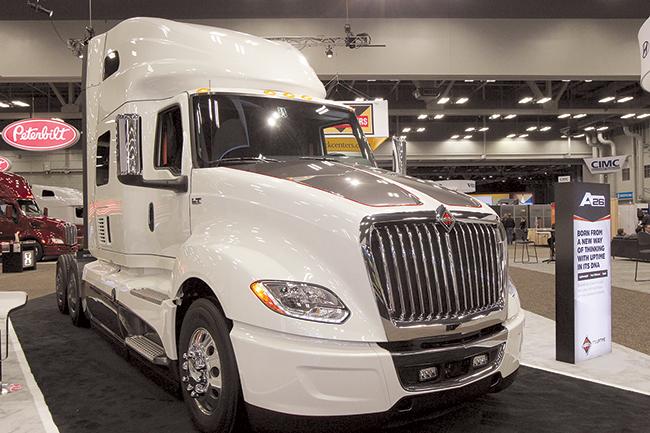 Some fleets spec auxiliary power units that support “hotel” amenities for sleeper cabs and are considered to be a driver draw and retention factor.

Scott Bates, product management and marketing leader at Thermo King, said tractors with high idle times have shorter maintenance intervals on the diesel particulate filters in their emissions systems. By reducing the need to idle during rest periods, an APU reduces wear on the DPF, allowing for longer maintenance intervals on the filter, contributing to lower total cost of ownership, Bates said.

The job the truck is being asked to do — the application — provides essential context for figuring out TCO.

“For sure, application has a lot to do with how the cost of ownership and the cost of operations pan out for fleets,” DTNA’s Rinehart said.

Between a dry van carrier and a temperature-controlled carrier, there might be little difference in total cost of ownership, Rinehart noted.

“Those are probably really close,” she said. “But the differences between an on-highway dry van versus a vocational truck — those are going to be very different.”

Fuel efficiency, and with it total cost of ownership, is affected by average weight and the type of terrain a carrier operates in, DTNA’s McHorse noted.

Agebrand cited the OEM’s marketing of “Xceed,” a package of features designed to provide fuel efficiency for on-highway operations with dry van bodies and refrigerated van bodies hauling 80,000 pounds and running about 60 to 75 miles per hour.

The truck maker also markets a package of features for weight-sensitive flatbed operations. “Your TCO calculation will be very different depending what tires you have,” Agebrand said. 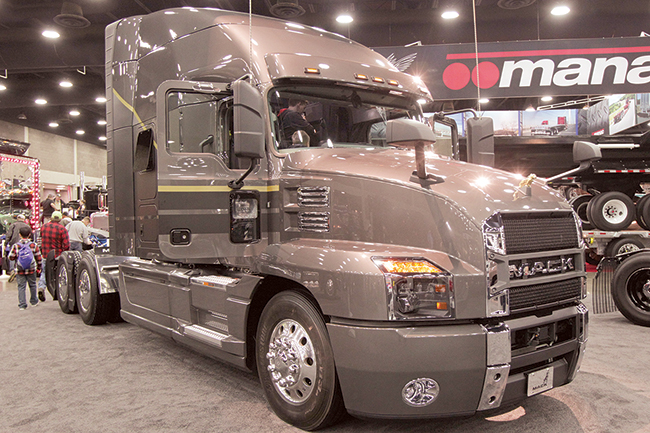 A 2018 Mack Anthem, also equipped with a sleeper berth, on display at this year's Mid-America Trucking Show. (John Sommers II for Transport Topics)

Ultimately, a truck must be well-suited to its application to prove its value to a carrier.

“The most expensive thing you can have is a truck that doesn’t do its job,” Agebrand said. “That TCO is infinite. It just keeps costing.”

In the case of a specific rear axle ratio, Agebrand said, “If the engine is not designed to go that low in RPM you will penalize that truck in that TCO calculation in that application. Another truck might have more power but still have a better TCO because that engine was able to run at 900 RPM.”

The most important factors in TCO are the weight and type of the load, the type of trailer and the roads that the truck will travel, Agebrand said. “It’s a very powerful tool, but you also need to be aware of [how] to use it.”

The use of telematics, and analysis of connectivity data will drive improvements in total cost of ownership, DTNA’s Rinehart said.

Systems such as Detroit Connect detect fault codes that are then transmitted via cellular service to the fleet and to the truck dealership. It also can help fleets initiate driver coaching, which can reduce, say, hard braking that has been registered by the system. Reducing that driving tendency can improve operational costs and will be reflected in TCO, McHorse said.

When the time comes to trade a truck, residual value is a prime consideration. And that time comes sooner now than it once did, some said.

“It’s much cheaper to run a shorter life cycle than it is to run a longer life cycle,” said Brian Holland, CFO of Fleet Advantage, a company that arranges leases on Class 8 equipment for private fleets and serves as an asset-management company to help its customers reduce their fleet operating costs.

Fleet Advantage’s TCO calculations include the cost of equipment, fuel, maintenance, financing and the truck’s residual value. Using an algorithm to evaluate change in those costs over time, “we can identify the optimal point in the truck’s life cycle when it becomes cheaper to replace it,” Holland said.

Maintenance cost per mile in a new tractor’s first year in service may be a penny or two cents, Holland said. “When you get to year seven or eight it’s about 20 cents per mile. Those costs escalate pretty quickly.”

In 2017, the Technology & Maintenance Council of American Trucking Associations published “Key Performance Indicators for a Maintenance Cost-Per-Mile Metric,” a recommended practice that was developed with the participation of fleet maintenance directors to help in calculating total fleet operational costs.

Ross Froat, director of engineering and information technology at ATA, said that this recommended practice was designed to guide fleet operators in one aspect of TCO: “How much money are you spending per mile on that truck? No matter what type of truck it is.” The American Transportation Research Institute in October also published an update of its analysis of operational costs in trucking. The report is available here.