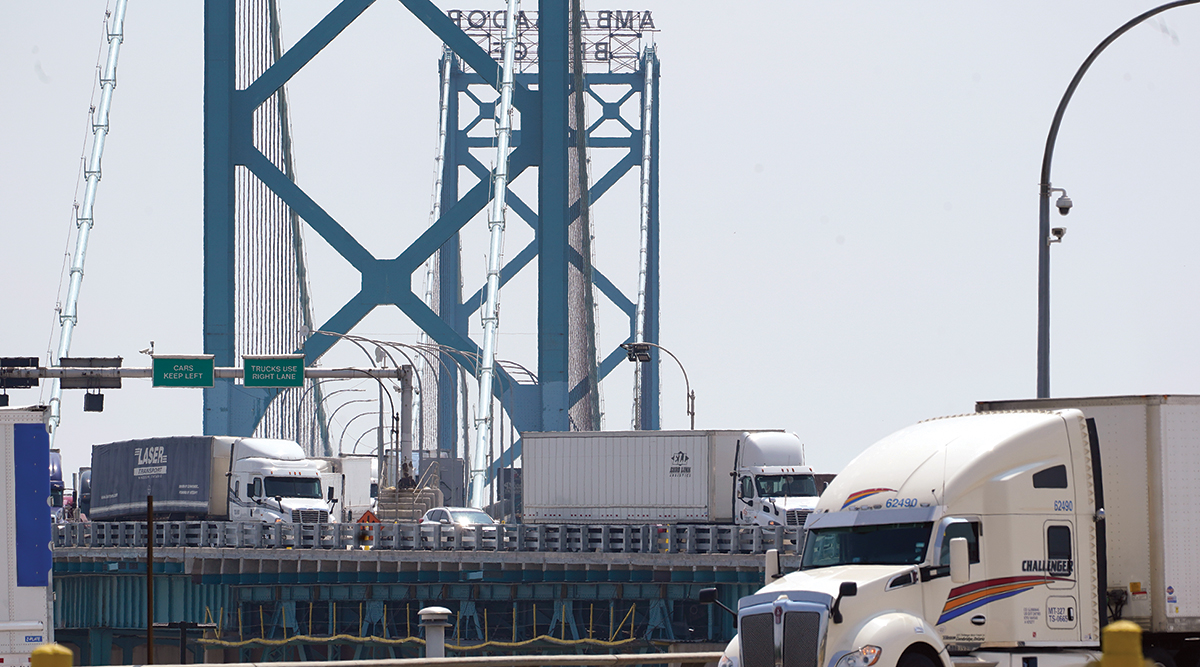 Vehicles enter the U.S. from Canada at the Ambassador Bridge in Detroit. (Paul Sancya/Associated Press)

Starting Jan. 22, travelers entering the United States at land ports of entry — notably along the Canadian and Mexican borders — and ferry points who are not U.S. citizens must be fully vaccinated against COVID-19, the Department of Homeland Security announced.

The requirement, which takes effect at 12 a.m. ET that day, does not apply to U.S. drivers. However, Canada and Mexico have similar regulations in place that do impact U.S. drivers — including truck drivers — who make cross-border runs.

The DHS announcement was released late on Jan. 20, and was one that the trucking industry had been anticipating, noted American Trucking Associations Chief Economist Bob Costello.

In a letter to ATA members, Costello outlined some of the details.

“Foreign national drivers will be required to demonstrate proof of being fully vaccinated as outlined by the U.S. Centers for Disease Control and Prevention,” he said. “Fully vaccinated means having two doses of an acceptable vaccine two weeks prior to entry into the U.S. or one dose of an acceptable vaccine that only requires a single dose, such as the Johnson & Johnson vaccine, two weeks prior to entry,” Costello said. “There is no testing requirement to enter the U.S.; however, those who have symptoms may be referred to the CDC for a medical evaluation.”

On Jan. 15 Canada began enforcing a vaccine mandate at its border crossings directed at foreign truck drivers seeking to enter that country. Unvaccinated Canadian drivers are being allowed to return to their home country, but they must abide by a strict reentry protocol that includes a mandatory 14-day quarantine period.

For weeks, trucking industry officials have been expressing concern that the cross-border vaccine requirements could impact the already stressed supply chain as fleets reschedule drivers and specific runs to accommodate the mandates.

Costello said there are anecdotal reports of some additional trucking shortages.

“I was told by a couple of fleets that spot market loads going to Canada are starting to pick up,” he said. “They’re not getting covered, so they are going into the spot market. I am also hearing about shippers asking about capacity, since the carriers that were hauling for them can’t get all that they need. It’s nothing catastrophic and some folks are scrambling a little bit.”

The Canadian Trucking Alliance also has expressed concern about the impact the mandates could have on the free flow of goods between the three giant trading partners, and the possible impact on the North American economies.

“While there’s reportedly a modest uptick of drivers getting vaccinated at some companies, there are substantial reports of higher-than-normal turnover and others declaring their intention to leave the industry,” CTA President Stephen Laskowski said earlier this month.

The Canadian government decided to move forward its mandate on the grounds that it had given trucking fleets and others in the transportation industry enough notice to prepare.

“On Nov. 19, 2021, we announced that as of Jan. 15, 2022, certain categories of travelers who are currently exempt from entry requirements, will only be allowed to enter the country if they are fully vaccinated with one of the vaccines approved for entry into Canada,” a statement from the Canadian Ministry of Transport and Ministry of Public Safety said. “These groups include several essential service providers, including truck drivers. Let us be clear: This has not changed. All drivers and truck drivers going into Canada will have to show proof of vaccination in order to be able to go into Canada, whether they’re an essential worker or not.”

Costello said while the Jan. 13 U.S. Supreme Court decision on vaccination mandates is not directly tied to the border situation, the high court’s ruling remanding the Occupational Safety and Health Administration rule will be something the trucking industry will feel immediately.

“It absolutely will impact it operationally, because now there’s no concern about having a domestic mandate. So, if those drivers don’t get vaccinated, they’ll just move on to move freight domestically instead of running into Canada. And there’s enough freight to go around, so it absolutely makes sense,” he said.