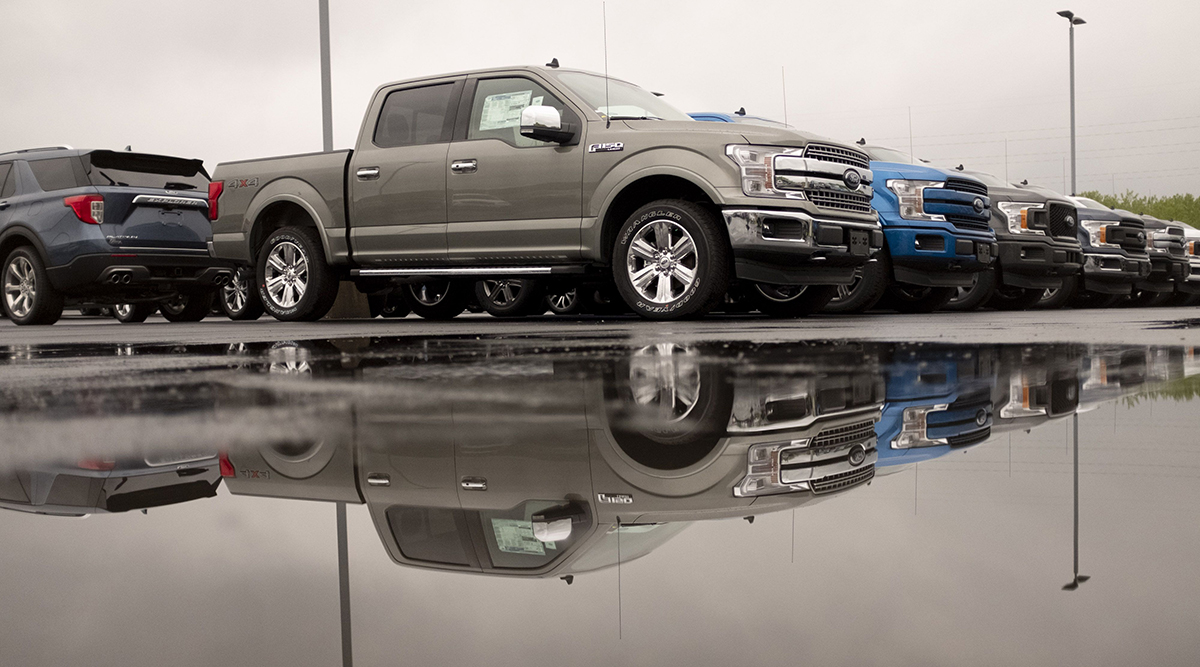 F-150 trucks sit on display at a car dealership in Peoria, Ill. Next year Ford will launch an electric version of its best-selling pickup. (Daniel Acker/Bloomberg News)

Ford Motor Co. is building a $185 million battery research lab as part of a push to build its own power sources for plug-in cars.

The 200,000-square foot research center, to be known as Ford Ion Park, will be located in the Detroit area and open by the end of next year. It will employ 150 researchers and include a pilot production line where the automaker can prove its ability to manufacture both power cells and full batteries. The investment represents an acceleration of Ford’s shift to electric vehicles.

“We’re much more bullish and aggressive on how fast this transition is going to play out,” Hau Thai-Tang, Ford’s product development chief, said in a briefing April 27. “We will no longer take an approach of hedging our bets and planning around the uncertainty of how fast that will play out.”

A global semiconductor shortage roiling the auto industry has highlighted the need for greater access to critical components such as batteries for the coming wave of electric vehicles, Thai-Tang said. The shortage of computer chips, which mostly come from Asian suppliers, is causing automakers to idle factories and could cost the industry $61 billion, according to consultant AlixPartners.

“It’s heightened the importance of controlling the supply chain,” Thai-Tang said. “That is one of the key learnings we’ve had from the semiconductors. So that’s part of our motivation here, but also getting to the best technology and the best cost.”

The research center is part of the $22 billion Ford has said it is investing by 2025 to electrify its lineup. The company has already begun selling the battery-powered Mustang Mach-E and next year will launch an electric version of its best-selling F-150 pickup.

The facility will help Ford speed up the development of electric vehicles and reduce their cost, Thai-Tang said. The carmaker has pledged to go almost all electric in Europe by 2030 and it supported California Gov. Gavin Newsom’s plan to ban the sale of new gasoline-powered cars in his state by 2035.

“We now see the market is going to develop very quickly,” Thai-Tang said of EVs. “It’s just really an evolution of how the market is playing out and how aggressive of a stance we’re taking in terms of leading this transition.”

At Ford Visit, Biden Says Future of Autos Is Electric