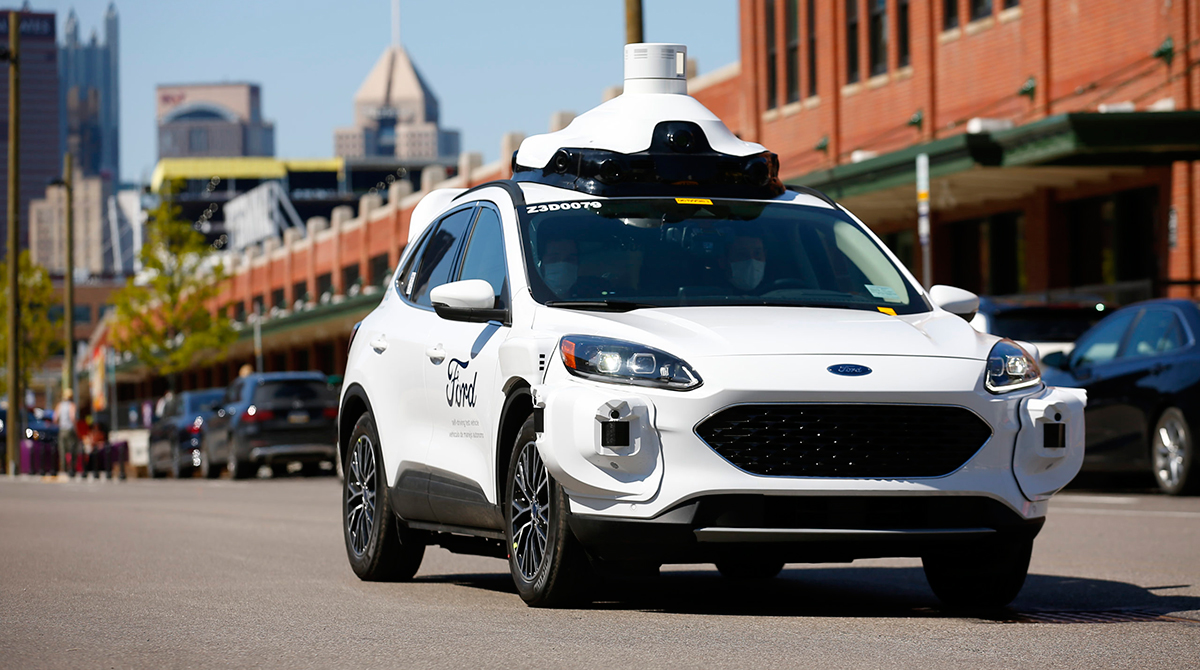 Argo AI, the self-driving startup backed by Ford Motor Co. and Volkswagen AG, has developed a sensor it believes will be key to commercializing autonomous transportation in cities, suburbs and on the highway.

The Pittsburgh-based company, which plans to go public as soon as this year, on May 4 unveiled a lidar sensor capable of “seeing” 437 yards (400 meters) down the road with almost photographic detail. Lidar bounces light off objects to create an image of the road ahead, providing critical information to computers that pilot next-generation technology in vehicles without human drivers.

The new sensor will be at the heart of the self-driving system that will debut on Ford’s ride-hailing and delivery vehicles next year and on VW models in the middle of the decade. Argo’s lidar could remove some roadblocks holding back more widespread adoption of driverless technology, in part by improving the visibility of other vehicles in low-light conditions.

Introducing Argo Lidar, our proprietary sensor for safe self-driving on urban streets and highways. This is a significant milestone driven by a breakthrough technology that offers long-range, low-reflectivity, and high-resolution detection. https://t.co/UUYXRVRP5C pic.twitter.com/MbgXKMHy5H

“It really unlocks our ability to operate safely on highways and to then expand to entire metropolitan areas,” said Bryan Salesky, Argo’s CEO and co-founder. Argo is testing its technology in six U.S. cities with vehicles that shuttle both cargo and passengers

The drive toward commercialized robotaxis has slowed in recent years after high-profile crashes and the death of a woman in Arizona who was struck by a self-driving test vehicle operated by Uber Technologies Inc. The pandemic further delayed planned launches of the technology, including from Ford, which pushed back its commercialization by a year. But Argo’s innovation may help speed up progress.

Its lidar’s range is about 100 meters greater than current technology, which could enable driverless vehicles to travel at speeds of 65 mph or more, said Sam Abuelsamid, principal analyst with researcher Guidehouse Insights, which just rated Argo among the leaders in self-driving development.

“It gives them potentially a very significant performance advantage over a lot of the competition,” said Abuelsamid, who reviewed the specifications of Argo’s lidar. “The level of performance that they’re potentially going to be getting from this gives them a lot richer information.”

Claims of superior vision down the road are common among self-driving startups, especially from well-funded players such as Alphabet Inc.’s Waymo, Amazon,com Inc.-backed Aurora Innovation Inc. and TuSimple Holdings Inc., the San Diego-based autonomous trucking firm that just raised $1.35 billion in an initial stock offering. But extended vision relies on cameras, which can be limited by snow, fog and darkness, Abuelsamid said.

“Others talk about being able to see things at 1,000 meters, but that’s with cameras,” Abuelsamid said. “Cameras are great when it’s light out. When there’s no light, then your cameras aren’t so great.”

Seeing dark things — such as cars with black paint jobs — also has stymied traditional lidar, but Argo’s system uses a technology known as “Geiger mode” capable of detecting as little as the smallest particle of light: a single photon. The company said that enables its lidar to identify dark objects four football fields away with near-photographic accuracy.

Argo’s acquisition ultimately caused Ford to change course on where it sourced the technology, after the automaker initially invested $75 million five years ago in Velodyne Lidar Inc., a market leader. Ford sold off its Velodyne investment at a profit late last year. It took the Velodyne stake six months before investing $1 billion in Argo, which was founded in late 2016 by Salesky and Peter Rander, previous leaders of autonomous teams at Alphabet’s Google and Uber.

“The impetus of the acquisition of Princeton Lightwave was to build that long-range sensor,” Salesky said. “[Ford] understood it and supported it because they’d wrestled with the problem long enough that they knew there was no good long-range answer.”

From a practical standpoint, the greater range of Argo’s lidar will allow Ford and VW autonomous vehicles to travel more widely and at greater speeds, Abuelsamid said. And that could give Argo’s self-driving system an edge, he said, especially in places such as Miami, where it’s testing driverless vehicles in a seaside city filled with bridges and causeways.

“Getting back and forth between South Beach and the main part of Miami, you’re going to cross the causeway at highway speeds,” Abuelsamid said. “This gives them the ability to operate safely at those higher speeds because they’ve got the range capability that you wouldn’t have with other lidar sensors.”