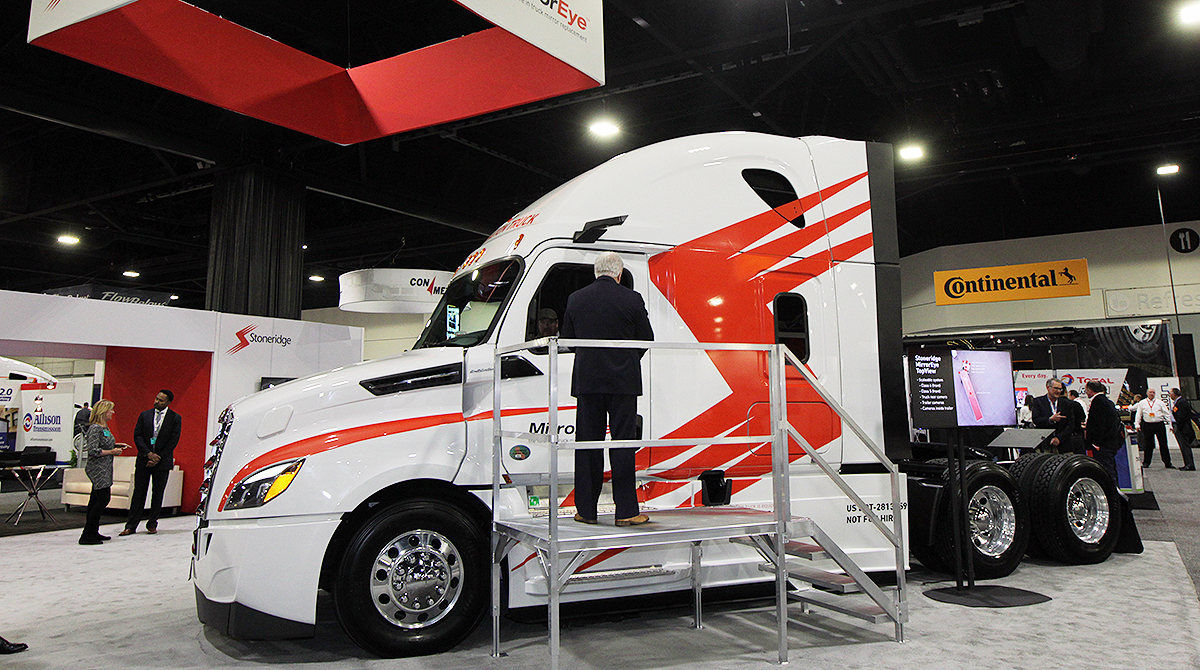 The Federal Motor Carrier Safety Administration on Dec. 26 announced it has issued a five-year exemption to Stoneridge Inc. to allow its aftermarket MirrorEye mirrorless digital camera and sensor system to be installed on trucks and motorcoaches as an alternative to traditional mirrors.

Under current law, trucks and buses must have two outside mirrors positioned to show the driver a view of the highway to the rear, and the area along both sides of a commercial motor vehicle.

In announcing its decision, FMCSA said, “The Agency has determined that granting the exemption to allow use of the MirrorEye system in lieu of mirrors would likely achieve a level of safety equivalent to or greater than the level of safety provided by the regulation.” 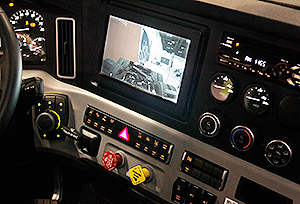 Drivers use video images instead of mirrors. (John Sommers II for Transport Topics)

The system works with five cameras, sensors and three digital displays. Along the right and left A-pillars are two 12.2-inch high-definition monitors, and there is another 7-inch display mounted high in the center of the cab. The displays are positioned within the driver’s line of sight to improve their reaction time as they scan their panel.

More than a year ago, the concept was presented to FMCSA and it was requested that the agency consider an exemption to the mirror regulation and allow trucks and buses to operate with their system and without mirrors.

Speaking to Transport Topics, Spangenberg called the decision historic and praised FMCSA for “adapting to the rapidly evolving vehicle safety and automation capabilities of the trucking industry.”

FMCSA officials also backed Stoneridge’s assertion that the all-weather cameras and sensors have an advantage over mirrors in rain, snow and ice, and low-vision conditions. Spangenberg said tests have shown that the mirrorless system decreases drivers’ head movement and the need to look outside of the cab.

By removing the mirrors there is also less aerodynamic drag on the vehicle, which can help fuel efficiency by as much as 2% to 4%, Stoneridge said. 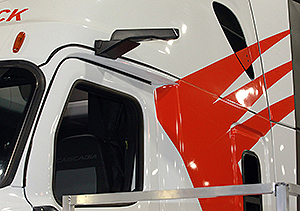 A camera on the cab's exterior. (John Sommers II for Transport Topics)

Since 2017, companies including Maverick Transportation, J.B. Hunt and Schneider National have been testing the technology. Spangenberg said those three companies have logged more than 2 million miles using the mirrorless system and their findings concerning the improvement in a driver’s overall situational awareness were included in the application submitted to FMCSA.

The research firm MacKay and Co. in Lombard, Ill., specializes in the trucking industry and tracks aftermarket demand of components on light-, medium- and heavy-duty vehicles as well as trailers. A company official told Transport Topics it is likely the MirrorEye system will be used first by larger fleets, and then smaller operators once the system becomes accepted as an industry standard.

“It makes sense that the big firms are testing it,” said Molly MacKay Zacker, the company’s vice president of operations. “I think smaller firms, on the whole, wait for larger firms to test and judge their adoption rates on whether or not they are going to try it or not. It seems like the larger firms are having success with it.

“It could be a huge win-win. I mean they (the industry and FMCSA) have been looking at these things for a long time. Forward-looking monitoring systems, braking systems, I mean it’s all come full circle in the name of safety. So, one more safety feature on the truck that might give a broader range of view to the driver, I would say that would be a plus.”

FMCSA-Stoneridge by Transport Topics on Scribd