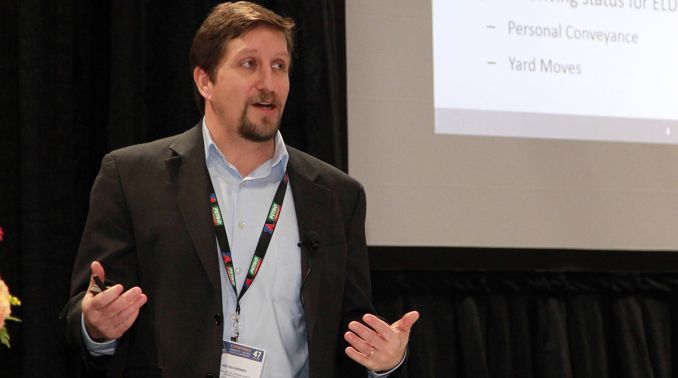 LOUISVILLE, Ky. — For the second consecutive day, a meeting between truck drivers and federal regulators turned sour, with more than a dozen drivers yelling at regulatory officials attempting to have a peaceful presentation and question-and-answer session on hours of service and driver personal conveyance issues.

For nearly 20 minutes, more than a dozen mostly angry independent operators yelled at Joe DeLorenzo, director of the Federal Motor Carrier Safety Administration’s office of compliance and enforcement, in the midst of an hourlong session at the 2018 Mid-America Trucking Show here March 24.

The drivers alleged that a new electronic logging device rule would harm their livelihoods, even cause them to go out of business or quit in defiance of the mandate that will be enforced when a grace period ends April. 1.

DeLonrezo quietly listened as the drivers loudly complained that agency officials have resisted trying to meet with them to discuss their long-standing grievances.

The drivers said that they had attempted to meet with agency officials in October, but officials were somehow not available for the meeting.

“We, the little guys want to sit down at the table across from you,” one of the drivers said. “We want to talk to you and help you solve these problems.”

Another driver said the group was concerned about the 14-hour limit on their workday being partially eaten up waiting on loading docks.

“There’s no mandate that tells Tyson or Walmart that they will unload the truck in a timely fashion,” one driver said. “They don’t care about us. There’s no mandate on the shipper or the receiver. It all runs to the bottom, to the driver. And that ain’t right.”

DeLorenzo, who gave several of the drivers his e-mail address, agreed to a meeting with the drivers in April.

But the disruption continued. It became so tense that a police officer was summoned to stand near the podium.

About halfway into the session, DeLorenzo said he was going to try for the last time to attempt to get back to the discussion on hours of service.

“I’ve heard several people say they want to hear this,” he said. “But they can’t because we’re all up with things I can’t do anything about. And it’s not fair to everybody else.”

DeLorenzo said that, a few months ago, FMCSA published a new set of proposed guidance that would relax the definition of personal conveyance, the off-duty period after drivers have reached their 11-hour driving time limit. 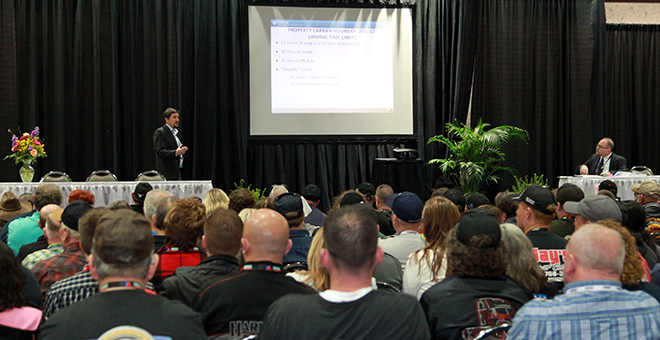 He said the old guidance required drivers to leave their trailers behind before moving their trucks on off-duty time.

“The way the new guidance reads is that it doesn’t matter,” he said. “The direction we’re trying to move in with personal conveyance is not what’s on the vehicle, not whether you have a trailer or not, it’s about what is the purpose of the movement.”

If a driver is moving in a direction to advance the load and it’s related to the transportation operation, it’s not legitimate personal conveyance, DeLorenzo said.

“The converse is, if you’re operating your vehicle for personal purposes unrelated to the transportation of the load, then that can be considered off-duty time,” he said.

There is no limit as to how far a driver can go or how long on legitimate personal conveyance time, DeLoreno told the group.

In an interview after the raucous meeting, DeLorenzo said the agency does have the authority to adjust the 14-hour maximum workday for drivers.

Although the 14-hour driver work day limit has been in force since 2005, DeLorenzo said the controversy was not new.

“I didn’t hear today what I haven’t heard before,” he said.