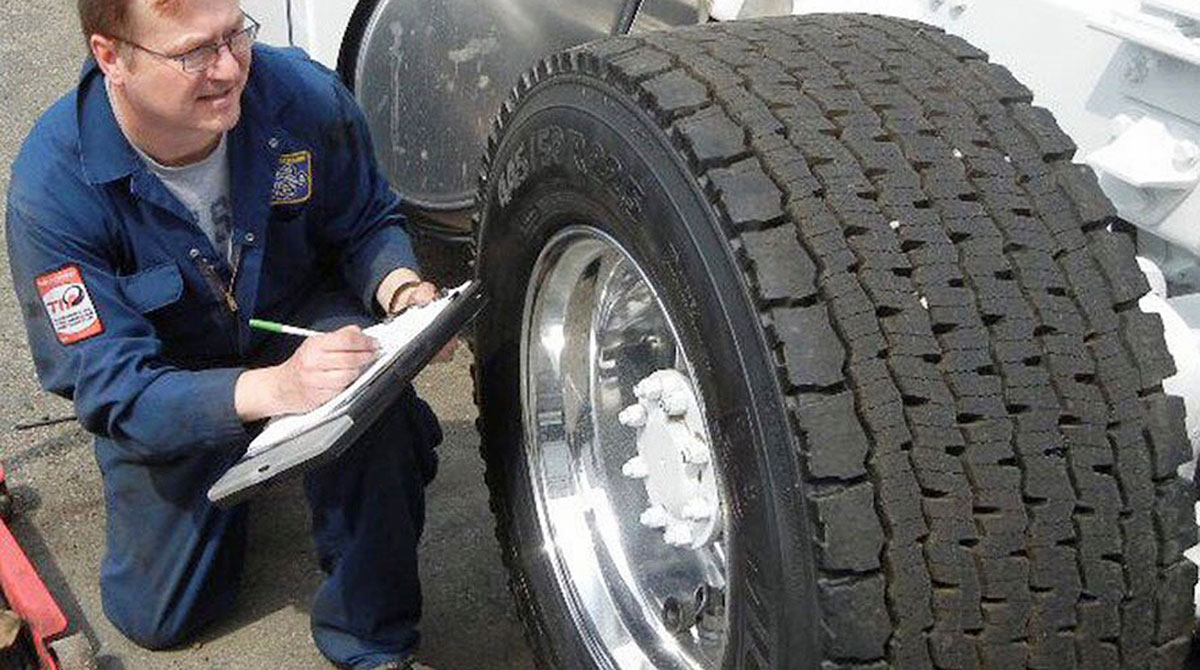 Motor carriers consider many factors — and come to different conclusions — as they evaluate wide-base tires versus standard duals for their tractors and trailers.

Ryder System’s corporate tire manager, Allen O’Callaghan, said his fleet is using singles only in cases where weight is a crucial issue. 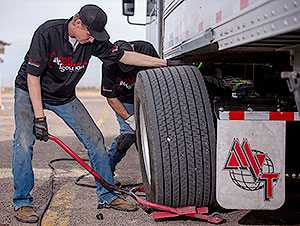 But Nussbaum Transportation’s director of maintenance, Tony Morthland, said his fleet is sticking with singles for its 450 trucks and more than 900 trailers.

And Ryan Walpole of Florida-based Walpole Inc., a dry bulk pneumatic tank fleet, also uses singles in applications where they make the most sense.

MVT’s Jones said every tractor that his 1,500-truck fleet has purchased in the past year has had duals. When he first started spec’ing wide-base tires, they saved half a mile per gallon of diesel. Since then, low-rolling-resistance tires have decreased the delta between singles and duals. Tire management practices have improved so that fleets are avoiding running mismatched dual tires, which creates drag on the smaller tire. Meanwhile, his fleet is doing more store deliveries, so length of haul is shorter.

Now, singles save 2 cents per mile on fuel, Jones said. That and the weight savings don’t justify what he said are the increased highway breakdowns associated with singles. Each of those costs the fleet an average of three hours, the equivalent of 180 miles. 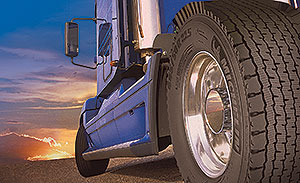 Mesilla Valley Transportation, which ranks No. 79 on the Transport Topics Top 100 list of the largest for-hire carriers in North America, isn’t the only fleet that has moved away from singles.

“What we hear from fleets generally is when they have a tire go down, it’s a thousand bucks to get there and change the tire,” he said. “So if that increases dramatically because of single tires, then that thousand bucks takes away the fuel savings pretty quick. But for fleets that manage it well that don’t have all those road calls, then they get the savings.” 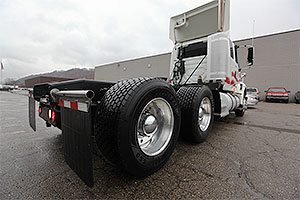 Mike Roeth, NACFE’s executive director, said the fuel efficiency difference between singles versus dual configurations has decreased in recent years. However, wide-base tires undoubtedly save on weight, which is important for tanker fleets and others that haul the maximum legal amounts.

Weight is the only reason that Ryder System would recommend singles on the 290,700 vehicles it manages, O’Callaghan said. The tires can save 315 pounds per tractor and 260 pounds per trailer.

More of Ryder’s customers have used singles in the past because they believed they offered significant fuel savings. But low-rolling-resistance dual tires have reduced that advantage to the point that Ryder doesn’t really see a difference. The company has about 2 million tires on the road at any one time, and only about 1.5% of them are singles.

Meanwhile, Ryder sees other disadvantages to singles. Purchase price per tire is higher, and retreadability options are lower because the casing is often too worn. With singles, a highway breakdown often requires replacing the wheel. Moreover, dual configurations offer more flexible options when there is a blowout; for example, the driver can limp it to a safer location than the highway shoulder for repairs.

For all of those reasons, “We’re going to continue to drive the traditional dual-wheel application unless it’s a situation where a customer just has to have a wide-base tire for weight purposes,” O’Callaghan said.

“You can expect a couple of tenths of a mile per gallon, at least, but it really depends on what brands that you compare,” he said.

Fuel savings are one reason Nussbaum’s Morthland remains committed to singles, which his fleet has been spec’ing since late 2010 after the company’s operations manager discussed the topic with Mesilla Valley Transportation. Tests on 10 trucks running singles and 10 running duals showed the singles offered a good return on investment.

Morthland said periodic tests show fuel savings of 0.25 to 0.3 miles per gallon depending on the driver, though some tests have shown a difference of 0.4 of a mile. He said Nussbaum actually sees fewer flats with its singles.

“Of course, you’ve got half of as many tires on the road, but we see even a better response with less flats than we do running duals,” Morthland said. “It just seems like for our application, it kind of floats on the top of items that normally would turn into a flat tire.”

Walpole, meanwhile, said his company installs wide-base tires selectively, even though its 300-truck dry bulk fleet reaches the gross weight limit on every load, and singles save between 400 and 700 pounds across the truck and trailer. He estimated that about 40% of his trucks and 25-30% of his trailers have singles.

Walpole said 100% of his sugar-hauling trucks use singles throughout the configuration. But on the company’s Birmingham, Ala.-based routes, most trailer tires are duals because the trucks go in and out of an industrial environment where the tires are more susceptible to hitting debris and having their sidewalls cut.

“Wide base has its applications,” he said. “It has its places. It’s just not meant for a one-place-fits-all kind of deal. So we run them in certain applications within our fleet that make the best business sense.”

Walpole said the carrier emphasizes driver training. Drivers tend to take better care of tires on trucks than they do on trailers. Drivers are instructed to pull over immediately when they have a blowout regardless of whether they are driving with singles or duals. That means duals don’t provide any real advantage of letting the driver limp to the next service center.

Robert Braswell, executive director of American Trucking Associations’ Technology & Maintenance Council, said wide-base tires still represent a minority of the market. For fleets that are on the fence, duals make more sense because of concerns about breakdowns and maintenance, and greater availability.

“No doubt that the conventional tires have gotten better,” he said. “When you’re talking about your SmartWay lists of all your low-rolling-resistance tires, I would say the gap between what you saw in the 2000s and now has definitely shrunk.”

Michelin’s wide-base tire category has grown in both the original equipment and replacement market since the product was introduced in the early 2000s, though dual configurations still outsell it. That’s according to Karl Remec, regional business model leader at Michelin North America, and Bill Walmsley, the company’s product category manager for linehaul.

They said the segment is becoming more crowded as more manufacturers enter the market. While singles’ fuel savings isn’t as large as it used to be, they’re still the most fuel-efficient options. Fuel savings vary, but 3% is not uncommon, they said. Weight savings of more than 600 pounds are possible, but depend on tread designs, wheel and tire sizes, and wheel types. 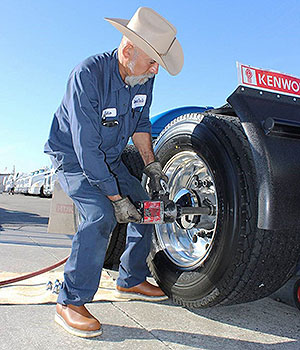 Tom Clauer, Yokohama Tire’s senior manager of commercial and over-the-road product planning, said the market is seeing an increase in the popularity of singles.

One change that has led to increased acceptance is improvements in availability and retreadability, he said. Use of singles is also increasing in fleets running 6x2 axle configurations.

Clauer said Yokohama’s singles can save fleets 30 pounds at the wheel-end position and 2-3% in fuel costs.

Singles account for less than 1% of sales worldwide for Zhongce Rubber Group Co., China’s largest tire manufacturer, but demand is high in places. Richard Li, global marketing director for international business, said they’re popular in the United States and China but see little demand in other parts of Asia, Latin America and Australia.

In Europe, singles are a cheaper purchase option than the dual configuration. Li said they are “dominating” the European trailer market with near 100% use in trailers with load capacities over 20 metric tons. Those trailers are being exported to the Middle East and Africa, where demand is increasing as well.

NACFE’s Roeth can envision scenarios that would increase motor carriers’ use of singles in the United States. Rolling resistance on those tires is being improved. Tire pressure monitoring systems are reducing underinflation and thus the chance of a blowout. NACFE expects trucks will carry more freight in the future and more will “gross out,” so wide-base tires will offer a definite advantage. Greenhouse gas rules favor singles.

“I think we’ll have both wide base and duals forever,” he said.