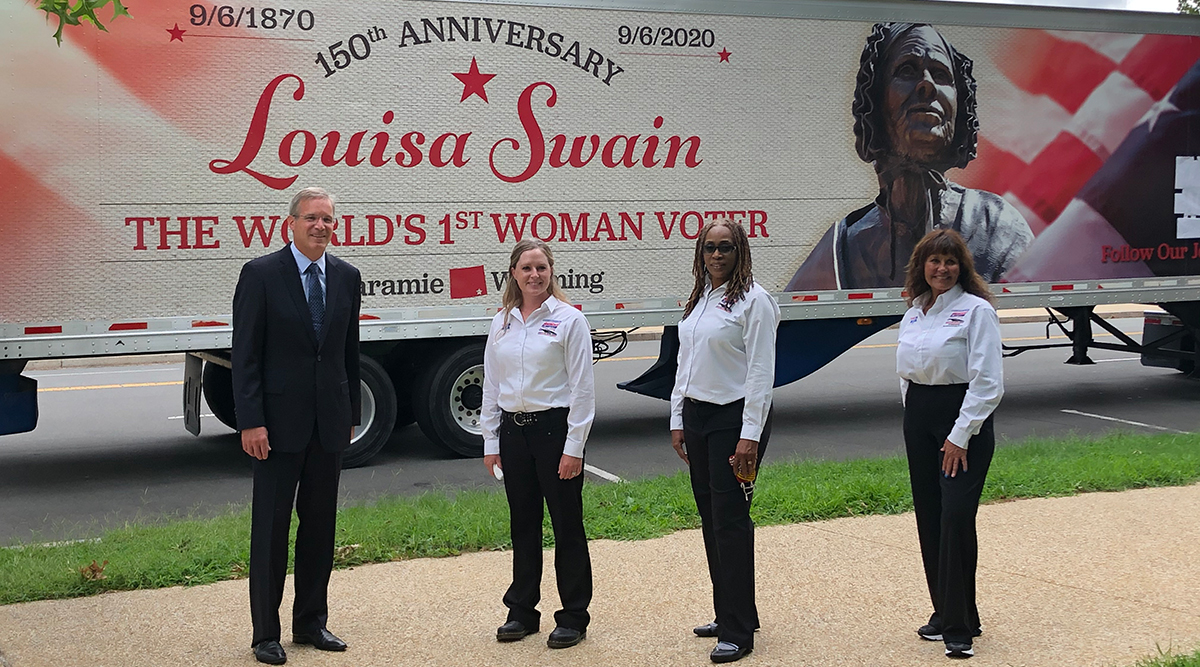 WASHINGTON — A team of female truck drivers started a westward journey Aug. 31 to honor the legacy of the first woman who voted.

The drivers gathered beside the Capitol Reflecting Pool to commence their trip from Washington to Wyoming to commemorate Louisa Swain, who became the first woman to vote when she cast a ballot in Laramie in 1870. This year also marks the 100th anniversary of the ratification of the 19th Amendment, which granted women the right to vote. (Women had voting rights in Wyoming before the amendment was passed.)

The event was held in partnership with American Trucking Associations, the Wyoming Office of Tourism and The Louisa Swain Foundation, an organization that specializes in preserving history and leading educational efforts about human rights and suffrage.

“All great movements begin with simple acts of courage and determination,” ATA President Chris Spear said during the event. “Having pursued careers in a traditionally male-dominated industry, these courageous and determined women are pioneers in their own right.”

The team includes April Coolidge, a driver for Walmart Transportation, Rhonda Hartman, a driver for Old Dominion Freight Line, Tina Peterson, a driver for Ravenwood Transport Inc. as a contracted service provider for FedEx Ground, and Theldorine “Dee” Sova, a driver for Prime Inc. Hartman, Peterson and Sova were present at the send-off event; Coolidge will meet them later on the route.

Combined, the four of them have driven 7.6 million accident-free miles, according to Hartman. Spear noted all four are ATA America’s Road Team captains.

The drivers will operate a specially wrapped tractor-trailer, emblazoned with an image of Swain. The journey will culminate in Laramie on Sept. 6, the date Swain cast her historic vote. The truckers will pay a visit to Baltimore and then head west to Ohio, where they will stop in Columbus and Dayton, before proceeding to Indianapolis, St. Louis, Denver and Wyoming. They will visit Wyoming’s capital, Cheyenne, before reaching Laramie. The team will stop at historic landmarks in these locations, and those interested may track their progression virtually on social media.

“I’m excited to get more women to see that we’re already in the industry and hopefully get some little girls interested,” Peterson said. “People don’t really see a lot of women in trucks, so hopefully by this whole campaign here, that will be in the spotlight, and it’ll get some people to think about driving as a career.” 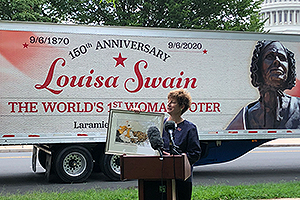 Robin Dale, associate librarian for library services at the Library of Congress, holds an illustration showing the 11 Western states that paved the way toward women's suffrage. She presented the illustration to the team of drivers, which will transport it across the country. (Eleanor Lamb/Transport Topics)

The team will transport an illustration called “The Awakening,” which depicts a torch-brandishing woman striding across the country toward masses of disenfranchised women. Robin Dale, associate librarian for library services at the Library of Congress, presented the illustration to the team of drivers. She explained it is among the objects in the Library of Congress’ “Shall Not Be Denied: Women Fight for the Vote” exhibit. The team will deliver the illustration to The Louisa Swain Foundation in Laramie.

“[The illustration] actually marks the role that the 11 Western states played in paving the way towards women’s suffrage, including Louisa Swain’s own first vote in a U.S. general election in 1870,” said Dale, who in the past has depicted Swain in a historic re-enactment organized by The Louisa Swain Foundation. “I wish you safe travels and a great journey.”

Also included in the trailer are educational materials and a canister of sanitizing wipes. Sova said she and her fellow truckers have been taking the necessary steps to stay safe amid the coronavirus pandemic.

“Personally, I’m quarantined all the time because I’m in my truck,” Sova said. “The only place I’m going in the last 30 days is shippers and receivers, and I’m covered [and] sanitized, and we all are practicing that.”