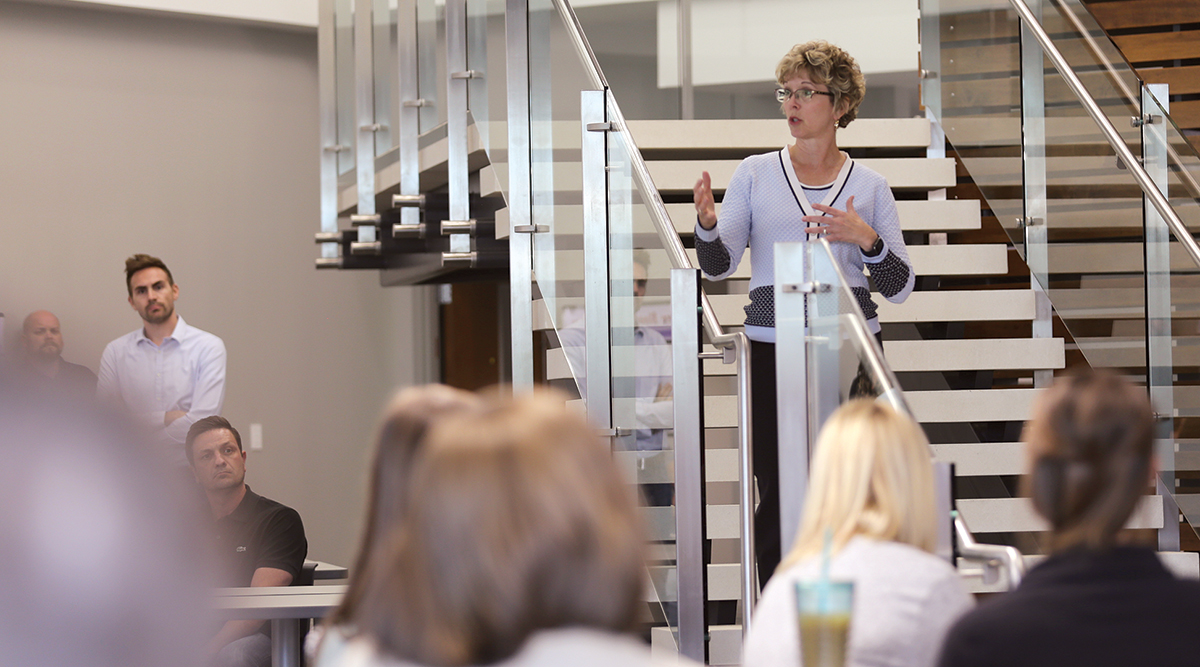 ArcBest CEO Judy McReynolds speaks to employees. More than a quarter of the company’s leadership roles are held by women. (ArcBest Corp.)

Women are taking on larger roles in the management of trucking companies, a move that is being championed by executives at some of the largest for-hire carriers in North America.

“Early on in my career, I de­cided I wasn’t going to make gender an issue or allow other people to do so,” said Judy McReynolds, chairman, president and CEO at ArcBest Corp. in Fort Smith, Ark. “At ArcBest, we believe in promoting the best person for every role. As long as companies are focused on putting the best people in leadership, more of our industry’s leaders will be women.”

ArcBest, in fact, has the highest percentage of women in leadership roles (28%) and on the board of directors (33%) of all pub­licly traded for-hire carriers in the United States, according to an analysis conducted by the Wo­men in Trucking Association and the University of Memphis.

Of 15 publicly traded trucking companies, the most recent annual survey found that six had no female directors and eight had no female executives.

“Despite research proving diversity increases a company’s net profits, these carriers are still being managed solely by men,” said Ellen Voie, founder of Women In Trucking. “This needs to change, as women bring a different perspective to the leadership team and are more risk-averse in their decision-making. This industry is still in need of a more diverse workforce at all levels.”

Voie said she sees positive movement and cites examples of daughters who have taken over companies from their fathers, including Karen Smerchek of ­Veriha Trucking in Marinette, Wis., and Sherri Garner Brumbaugh of Garner Transportation in Findlay, Ohio. 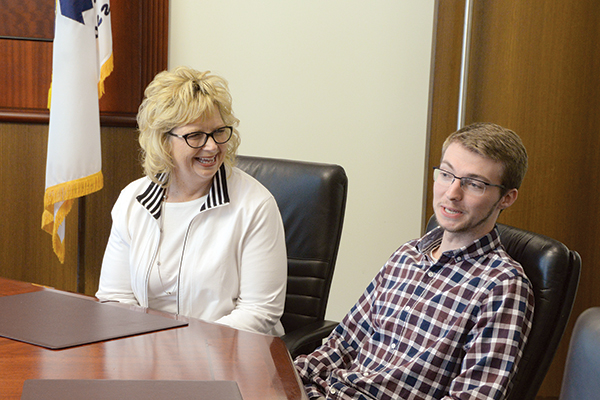 Sherri Garner Brumbaugh has led Garner Trucking since 2008. Her son, Jon, will work as a congressional intern this summer. (Jaclyn O'Laughlin)

Women are also starting companies. Joyce Brenny launched Brenny Transportation in 1995 after spending more than a ­decade driving a truck and working in management and sales for other trucking and logistics firms.

“I had bad things happen to me,” Brenny told Transport Topics. “I wanted to provide an environment where women feel safe and are not subject to harassment. We do criminal background checks on everyone. Fifty percent of our office staff are women, but only 5% of drivers. We’d love to see more women interview for jobs. Trucking is a really good service industry, and women are good with details, good with people and are nurturing.”

Likewise, Deborah Latham started Georgia Tank Lines because she was unhappy with the way most trucking companies operated in the Atlanta market. Her company now operates a fuel-­delivery fleet of 40 tractors and 48 trailers.

“Carriers are recognizing the value of gender diversity,” Voie said. “It just takes time to change attitudes and practices.”

McReynolds joined ArcBest in 1997 as controller, and her rise to the top was aided by several close associates.

Fifty percent of our office staff are women, but only 5% of drivers. We'd love to see more women interview for jobs. Trucking ia a really good service industry, and women are good with details, good with people and are nurturing.

“Two people who really stand out as being incredibly helpful are Robert Young, our former chairman of the board and CEO, and my husband, Lance,” McReynolds told Transport Topics. “Robert recom­mended me for the CEO position and gave me a lot of direct interaction with the board earlier in my career, ensuring I was part of strategic discussions. ... Secondly, my husband, Lance, has supported me throughout our life and took on so many of our family responsibilities, allowing to me to focus my attention on my job.”

The company actively supports development of future leaders as well.

“Growth is one of our core ­values — we grow our people and our business,” McReynolds said.

“I believe there must be a willingness to embrace data-driven decisions and an analytical mindset,” she said. “With the increasing digital nature of so many industries, including ours, the ability to source information from multiple sources and build compelling business models is essential.”

“We also will continue to need people who have the ability to build strong relationships,” she added. “Our customers need to trust that our people can truly help them navigate difficult business issues in order to provide us the data we need to uncover insights and optimize their supply chains.” 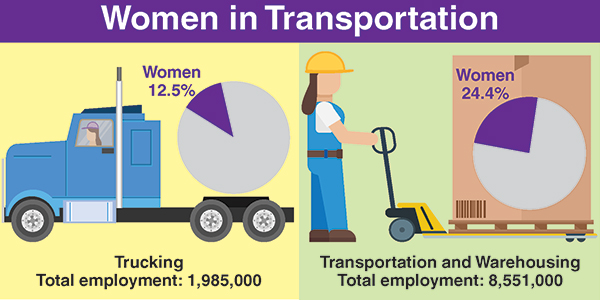 At Veriha Trucking, Smerchek has taken steps to connect with younger workers and women since taking over as president in 2010 with the result being a front-office staff that is 60% women, including two-thirds of leadership positions, and nearly half of the company’s shop personnel and 30% of its drivers are millennials.

Among the changes was a guaranteed pay package for drivers and a large investment in in-cab communications.

Brumbaugh took over Garner Trucking in 2008, less than a year after the death from cancer of her father and company founder Vern Garner. A former music educator with a master’s degree, Brumbaugh said she sees herself as a “teacher by trade and a trucker by heritage.”

“Being a CEO,” she noted, “is a lot like being a band director.”

Brumbaugh has three sons — Ben works as a service writer in the business, Jon is attending the University of Alabama and working this summer as a congressional intern in Washington, and Zac works as an information tech­nology specialist in Cincinnati — and she loves “what they bring to the table.”

“Men are fixers. They see a problem. They try to fix it. Women are more detail-oriented,” she said.

Brumbaugh would like to see more women involved in industry leadership.

As a second vice chairman of American Trucking Associations, Brumbaugh is in line to lead the national trucking federation, a position her father held in 2002.