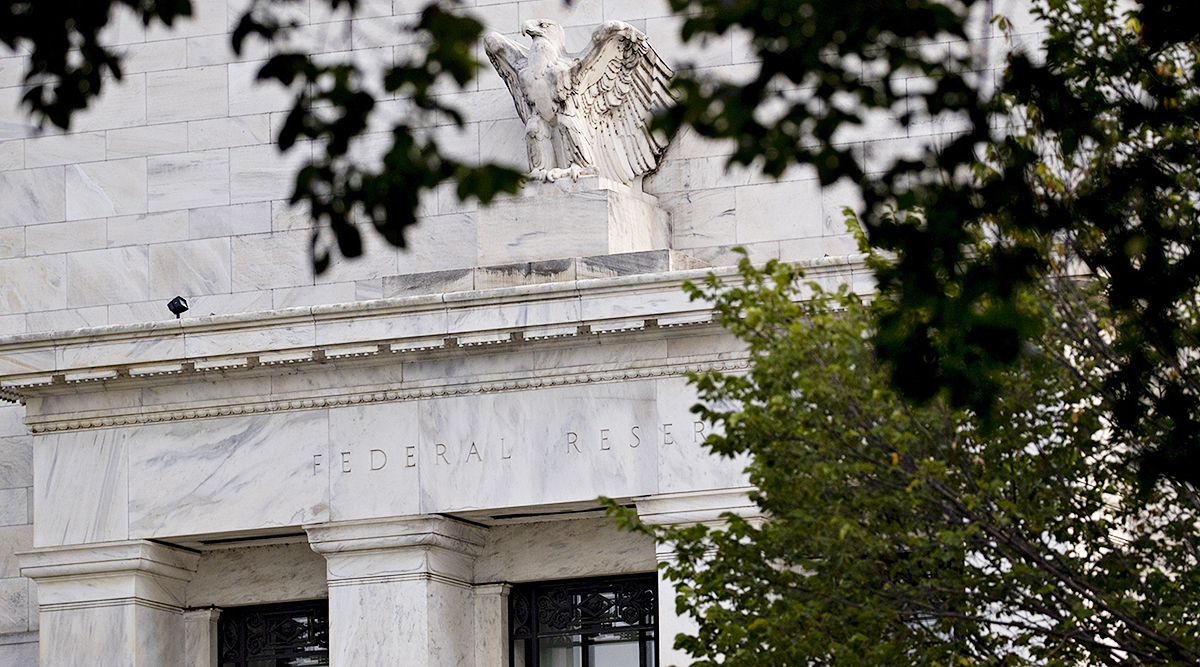 The Federal Reserve reduced interest rates for the first time since the financial crisis in a move that Chairman Jerome Powell said was designed to “ensure against downside risks” rather than signaling the start of a lengthy cycle of monetary policy easing.

“We’re thinking of it as essentially in the nature of a midcycle adjustment to policy,” he told a press conference July 31 after the decision. “It’s appropriate to make an adjustment of policy to a somewhat more accommodative stance.”

Central bankers voted, with two officials dissenting, to lower the target range for the benchmark rate by a quarter-percentage point to 2%-2.25%. The shift was predicted by most investors and economists, yet will disappoint President Donald Trump, who tweeted July 30 he wanted a “large cut.”

“In light of the implications of global developments for the economic outlook as well as muted inflation pressures, the committee decided to lower [rates],” the Federal Open Market Committee said in a statement after the two-day meeting in Washington. It also noted that “uncertainties” about the economic outlook remain. 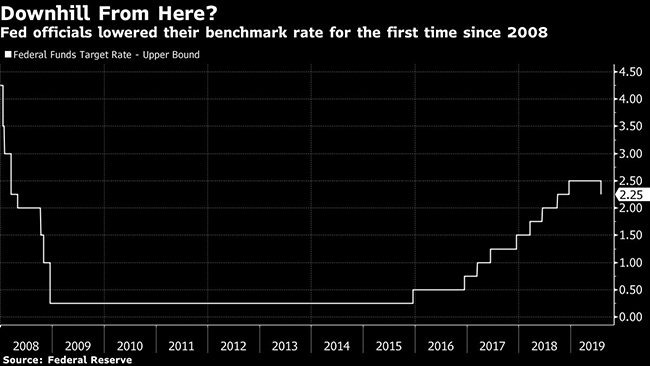 U.S. stocks whipsawed between gains and losses after the Fed’s announcement, while Treasuries and the dollar also fluctuated as traders awaited Powell’s press conference.

Officials also stopped shrinking the Fed’s balance sheet effective Aug. 1, ending a process that very modestly tightens monetary policy and was previously scheduled to come to a close at the end of September.

Policymakers appeared open to another cut as early as September when they next convene, while sticking with wording in their statement that preserves their options.

“As the committee contemplates the future path of the target range for the federal funds rate, it will continue to monitor the implications of incoming information for the economic outlook and will act as appropriate to sustain the expansion,” they said.

Kansas City Fed President Esther George and Boston’s Eric Rosengren voted against the cut. The statement said they “preferred at this meeting to maintain the target range for the federal funds rate.” It was the first time since Powell took over as chairman in February 2018 that two policymakers dissented.

While the domestic economy has performed relatively well, the Fed cut comes amid concern that softness abroad threatens the decadelong U.S. expansion. Trump’s trade war with China is hurting foreign demand. Data released earlier July 31 showed the pace of quarter-over-quarter growth in the euro area slowed by half in the latest three months to 0.2%.

In the United States, after growing 2.5% last year, fueled by now-fading tax cuts and higher government spending, the economy expanded at a 2.1% annualized pace in the second quarter. The trade dispute was blamed for a manufacturing slowdown and the first drop in business investment since 2016. 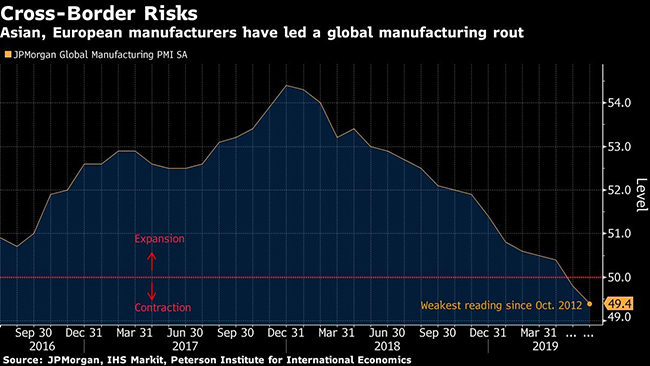 In their assessment of the U.S. economy, officials made only minor changes to their statement language.

Powell repeatedly has said the Fed’s “overarching goal” is to keep growth going. Acting now, when the central bank has less room to pare rates than in past downturns, is partly aimed at getting ahead of any potential slump.

Lackluster inflation also offered the Fed space and reason to ease. Its preferred price gauge, excluding food and energy, rose 1.6% in June from a year earlier and hasn’t met the Fed’s 2% target this year.

Trump is unlikely to be satisfied as he puts the economy at the heart of his re-election bid. He has broken with convention and undermined the Fed’s political independence by lobbying it to loosen policy and publicly questioning his nomination of Powell as chairman.

While Trump and some investors wanted the Fed to be more aggressive, its scope for doing so is limited. Stocks are high, unemployment is around the lowest in a half-century and consumers continue to spend. There’s also a chance lower rates will lead to asset bubbles and excessive borrowing that will haunt the economy later.

The rate reduction was the first since December 2008 when the Fed dropped its benchmark effectively to zero as it battled recession and financial crisis. It began raising borrowing costs in December 2015, doing so another eight times. Officials indicated as recently as December they intended to continue to hike this year.

They dumped that plan in January as financial markets fretted monetary policy had become too restrictive.

Fellow central banks are set to follow the Fed. Those in India, South Africa and Australia are among those to have cut this year. Brazil was set to cut later July 31, and the European Central Bank has indicated it will do so in September.

A worry for policymakers is that a decade of easy money leaves them short of ammunition for fighting a serious downturn. That likely means governments will face demands to do more if economies keep struggling.