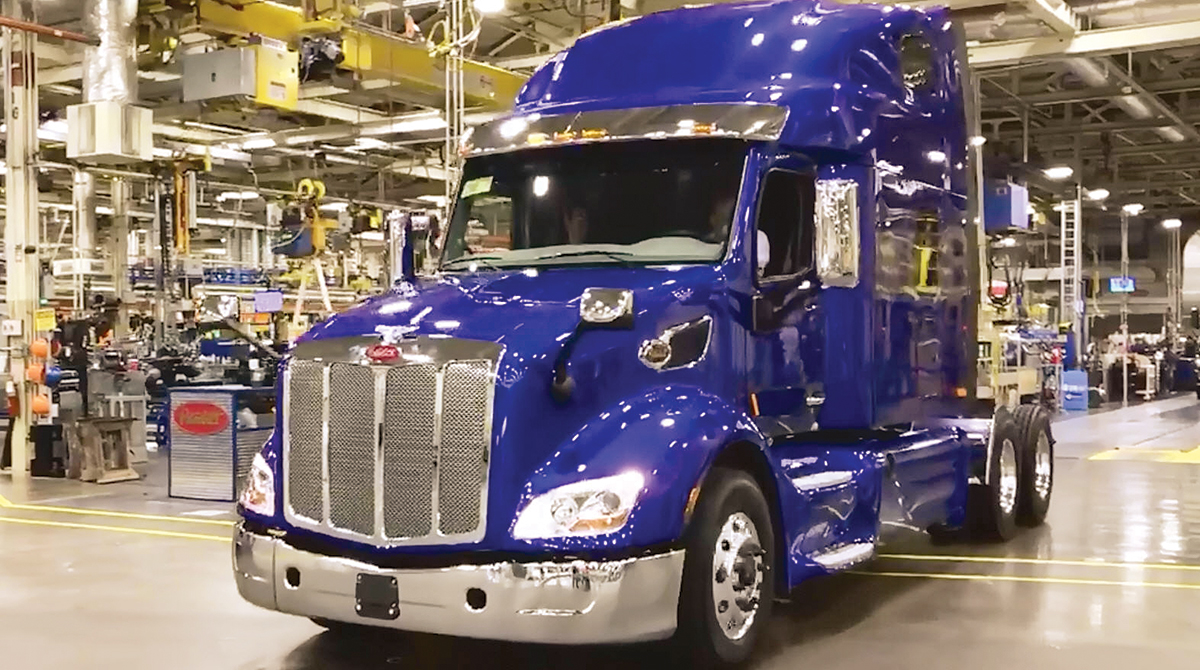 A Peterbilt 579 comes off the production line. (Peterbilt Motors Co.)

This time of year, “things are kind of pedestrian. There’s a seasonal component to be sure,” said Steve Tam, vice president at ACT Research.

A different analyst saw in the sales number another aspect of the disrupted supply chain.

“This market is as frozen as you can get it,” Don Ake, vice president of commercial vehicles at FTR, told Transport Topics.

Ake suggested, with production rising in February, truck makers were having difficulty “moving product through the channel and getting them sold. The sales number should be much higher, and inventories went up. And that doesn’t make a lot of sense in this market. People need trucks. The trucks got manufactured in January and February, but the trucks didn’t get sold.”

Kenworth and Peterbilt are units of Paccar Inc. International is a unit of Traton SE’s Navistar Inc. Freightliner and Western Star are brands of Daimler Truck North America. VTNA and Mack are units of Volvo Group. 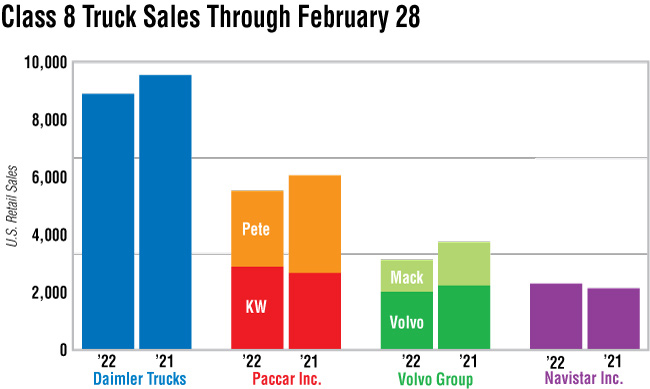 “After VTNA experienced a strong fourth quarter in 2021, our retail sales were lower than expected in January 2022. However, our deliveries improved in February with a 10.9% share for the month in the U.S.,” said Magnus Koeck, vice president of strategy at VTNA. “We are now looking forward to a strong March, but expect the industry will continue to face labor shortages and supply chain constraints which will impact the industry retail numbers for the foreseeable future.” February market shares the parent companies earned were: DTNA: 42.6%; Paccar: 29.8%; Volvo Group: 17.5%; Navistar: 10.2%.

Other truck makers either declined or did not respond to a request to comment.

Meanwhile, not unexpectedly, the Environmental Protection Agency’s renewed focus on toughening standards in 2027 on nitrogen oxides (NOx) and on greenhouse gases (GHG) has raised the rumble of a pre-buy — or accelerating purchases before of the sale of the compliant and more costly trucks. Especially so if EPA harmonizes its rule with the California Air Resources Board’s emission-reduction steps coming separately in 2024. 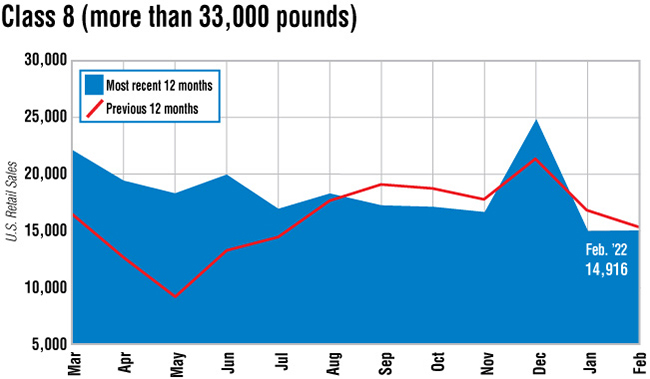 In any case, Section 177 of the Clean Air Act authorizes states to choose to adopt California’s standards in lieu of federal requirements.

Those states, currently numbering 16 plus the District of Columbia, in addition to California, account for about 20% of the market, Tam said.

“As we have seen time and time again in these mandates it becomes disruptive to the whole revenue cycle — manufacturing and sales,” Tam said.

He said ACT is expecting a disruption in 2024, but rather than taking the form of a pre-buy — which the truck makers could not meet due to ongoing capacity constraints — it may take the shape of a no buy.

At the same time, Tam said, assuming the more strict EPA mandate is enacted, “you would see disruption in spades before 2027.”

“Right now the phrase we are using for 2027 is ‘the mother of all pre-buys.’ That’s what we anticipate.”

As for this year, another analyst said most economists expect the freight market to soften in 2022. 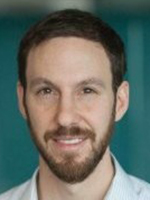 With higher inflation, rising gas prices and tighter monetary policy, “it’s hard not to imagine a world where consumer demand softens over 2022 and into 2023,” said Aaron Terrazas, director of economic research at Convoy Inc., a digital freight broker.

“Consumer demand has been the primary driver of freight demand over the past year and a half,” he said.

He suggested there will be continued pockets of strength in the freight market — home building and the automotive sector — but those are not going to be enough to offset the erosion of consumer demand.

“And it is hard for a lot of trucking companies to justify adding capacity just when the consensus is the market will begin to give ground,” said Terrazas. “That’s just a very long, risky horizon.”