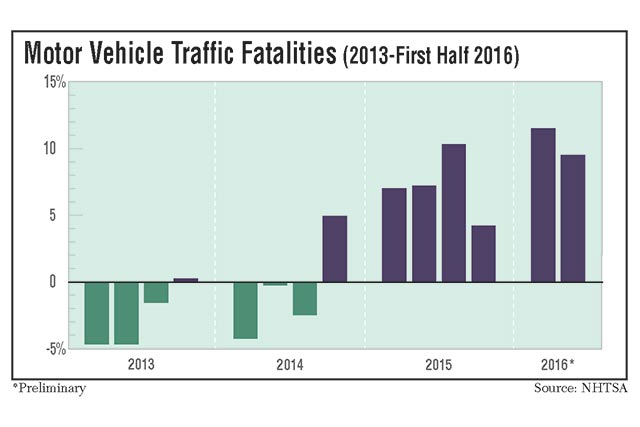 This story appears in the Oct. 10 print edition of Transport Topics.

Distressed by the biggest jump in highway deaths in 50 years, the National Highway Traffic Safety Administration launched a Road to Zero Coalition to reverse the growth in fatalities.

NHTSA’s Oct. 5 announcement that fatalities soared 10.4% in the first six months of this year, after a 7.2% increase in traffic deaths in 2015, added even more urgency to the unveiling of the coalition that same day in Arlington, Virginia.

“We have an immediate crisis on our hands and a long-term challenge,” NHTSA Administrator Mark Rosekind said in announcing that his agency, the Federal Motor Carrier Safety Administration, and the Federal Highway Administration are joining with the nonprofit National Safety Council to lead the coalition. “There are new, innovative solutions out there. We just have to work for them.”

Rosekind said the effort, which will be funded at first by commitments of $1 million in each of the next three years from NHTSA and another $1 million from the National Safety Council, will be unprecedented in the breadth of the stakeholders involved.

While Rosekind said that half of the increase in traffic deaths in 2015 could be attributed to the rise in vehicle miles traveled because of lower fuel prices and an improving economy, he stressed that 94% of fatalities can still be blamed on human behaviors such as distracted driving, speeding and drug and alcohol use.

“New technologies [such as autonomous vehicles] have untold potential to save lives on our road, [but] the Road to Zero Coalition is being formed to take immediate action today and to build out a plan for the long term,” Rosekind said. He termed emerging technologies a tool but not an answer to the problem. “We will create a zero-traffic-death scenario that is feasible and achievable within 30 years. We know we can’t reach zero by doing more of the same.”

Noting that there’s a traffic death every 15 minutes, FHWA Deputy Administrator David Kim said the Road to Zero “is more than a slogan. It’s a mission.”

FMCSA Deputy Administrator Daphne Jefferson noted that large trucks and buses represent only about 5% of registered vehicles and 10% of miles traveled, but they are involved in 12% of the fatalities.

“That number’s way too high,” Jefferson said, adding that FMCSA is focused on raising entry standards into the truck and bus industries while also taking current “bad actors” off the roads.

National Safety Council CEO Deborah Hersman said that there once were major doubts that fatal commercial plane crashes in the United States could be avoided but that there hasn’t been one in more than seven years.

“One hundred [traffic] fatalities a day is the equivalent of two regional jets crashing every day,” Hersman said. “If we had 14 plane crashes a week, our hair would be on fire and no one would set foot on an airplane. Why do we accept the fatalities that occur on our roadways because they happen one or two or three or four at a time?”

If the U.S. traffic death rate equaled those of 19 other high-income nations, she added, about 20,000 lives — nearly 60% of those lost on America’s roads — could be saved.

“We’ve worked on the behavioral stuff for a really long time, and we haven’t been as successful as we need to be,” Hersman said.