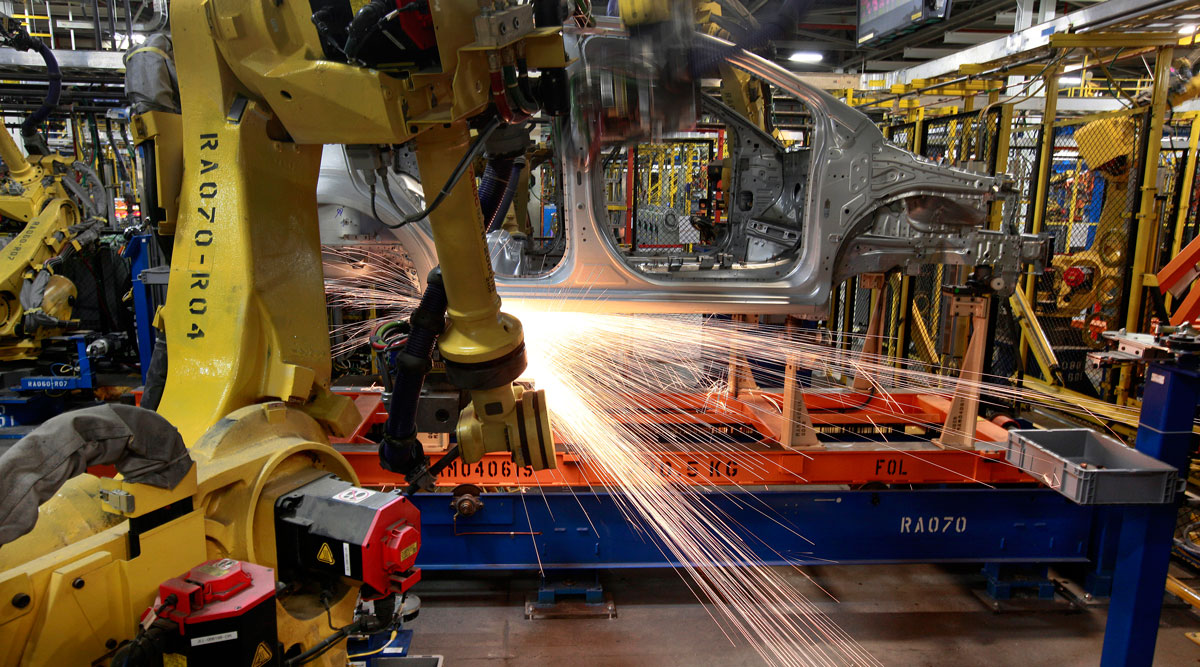 Robots weld a vehicle at the GM Orion Assembly plant in Michigan in May 2011. (Paul Sancya/Associated Press)

DETROIT — Factories that crank out cars and trucks looking into making much-needed ventilators. Distilleries intended for whiskey and rum to instead turn out hand sanitizers and disinfectants. And an electronics maker that builds display screens repurposed for surgical masks.

All are answering the call of duty amid a pandemic that has so far claimed more than 15,000 lives and sickened 350,000 people globally.

But redirecting plants to make completely different products will take a long time and a huge effort — possibly too long for some companies to help with medical gear shortages that are becoming more acute every day.

“When you are repurposing a factory, it really depends on how similar the new product is to the existing products in your product line,” said Kaitlin Wowak, a professor at the University of Notre Dame who focuses on industrial supply chains. “It’s going to be a substantial pivot to start producing an entirely different item.”

On March 20, President Donald Trump said he invoked the Korean War-era Defense Production Act, which allows the government to marshal the private sector to fight the COVID-19 pandemic. But he did not give examples as to how he was using it.

At a news conference March 21, Trump singled out GM and Ford as among the many businesses that have asked to start making medical gear like ventilators, the need for which he said has grown into the hundreds of thousands.

“Nobody’s ever heard of a thing like that. With that being said, General Motors, Ford, so many companies — I had three calls yesterday directly, without having to institute like `You will do this’ — these companies are making them right now,” Trump said.

Neither automaker, however, is building ventilators at present. GM announced on March 20 that it is working with ventilator maker Ventec Life Systems to ramp up production. The automaker said it would help with logistics, purchasing and manufacturing, but stopped short of saying it would make ventilators in its own factories, which have been idled for two weeks after workers who’d been fearful of contagion put pressure on the company.

Crosstown rival Ford, which also suspended factory production along with other automakers with operations in North America, confirmed that it too was in discussions with the Trump administration about helping. 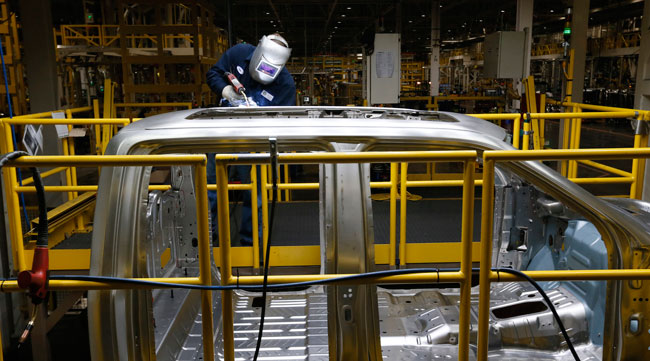 A worker welds a 2015 Ford F-150 cab at the Dearborn Truck Plant in Michigan in November 2014. (Paul Sancya/Associated Press)

“We’re looking at feasibility,” Ford spokesman T.R. Reid said. “It may be possible, but it’s not [like] you go from Rangers (small pickups) one day to ventilators the next. We’re figuring out what is possible now.”

Ford and Rolls-Royce also are working with the British government to see if they can switch over their factories.

“We are keen to do whatever we can to help the government and the country at this time and will look to provide any practical help we can,” Rolls-Royce said in a statement.

Although the government can steer factories to overcome shortages, makers of heavy goods such as cars and trucks can’t just flip a switch and produce something else.

It would be difficult to get ventilator or even surgical mask designs, line up parts supplies and train workers to make them in a short period, said Jorge Alvarado, a professor in the Engineering Technology and Industrial Distribution Department at Texas A&M University. And auto plants generally aren’t clean enough to make medical equipment.

Companies also would have to find mask or ventilator manufacturers willing to share knowledge, expertise and even factory workers to transfer production elsewhere, Alvarado said.

During World War II, automakers were more easily able to shift to making tanks and planes because they are close relatives to cars and trucks, Alvarado said. Auto factory equipment such as robots and assembly lines aren’t really compatible with smaller items such as ventilators, he said.

Other industries may be better equipped to help with the virus. Rum producer Bacardi, for example, said its distillery in Puerto Rico has shifted to making ethanol needed to produce hand sanitizer. Small U.S. distilleries such as Eight Oaks Farm in Pennsylvania are converting operations to make alcohol-based disinfectant. It will charge whatever people want to donate.

Germany-based Beiersdorf, known for skin care products such as the Nivea and Coppertone brands, and Luxury giant LVMH are preparing to make medical disinfectants in Europe for hospitals, police and firefighters. French cosmetics giant L’Oreal says it is making sanitizer gel.

Electronics maker Sharp Corp. said it will start making surgical masks using a plant in central Japan that usually makes displays. And Michigan-based office furniture company Steelcase is exploring ways to use its factories to make health care items, studying whether it can make masks and protective equipment or partitions for hospitals.

“This is an extraordinary crisis that necessitates extraordinary measures and actions from both the public and private sectors,” the company said in a statement.

Even though it may take time and a monumental effort to switch factories to medical products, that may have to be done if the virus outbreak lasts for several months or longer, said Notre Dame’s Wowak.

“I think given the circumstance and how critical it is for these surgical masks, ventilators and gloves, I think there is going to be a lot of organizations, government, private, trying to increase (factory) capacity,” she said. “Maybe the government recognizes how critical of an issue this is.”