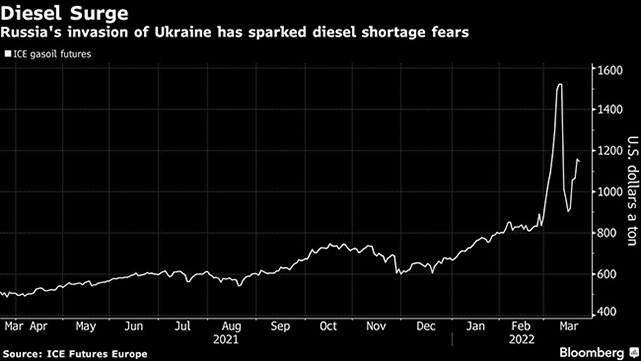 Europe is facing the prospect of a shortage of diesel as flows from Russia dwindle in the aftermath of its invasion of Ukraine, senior executives at three trading houses said.

Europe’s leading diesel external supplier has seen its exports of crude oil and petroleum products slide by about 2 million to 2.5 million barrels a day since the invasion, Trafigura Group CEO Jeremy Weir said at the Financial Times Commodities Global Summit on March 22.

“That’s affecting greatly the amount of product here in Europe,” Weir said at the event in Lausanne, Switzerland. “The diesel market is extremely tight. It’s going to get tighter,” he added, warning that it may even result in fuel stations running dry.

Rocketing diesel prices, alongside higher utility bills, are probably the most tangible inflationary impact of the war in Ukraine for European consumers, having surged much faster than oil over the last few weeks. The fuel accounted for almost three-quarters of the region’s total road fuel sales in 2019, with a little over 40% of passenger cars powered by diesel.

European diesel stockpiles are expected to fall to the lowest level since 2018 this month, according to Energy Aspects Ltd., a consultant. About 500,000 tons of Russian diesel exports are at risk in March, the firm said in a presentation, leaving “physical supply tighter than ever.”

“This is a global problem but for Europe it’s very hard because Europe is so short,” he said. 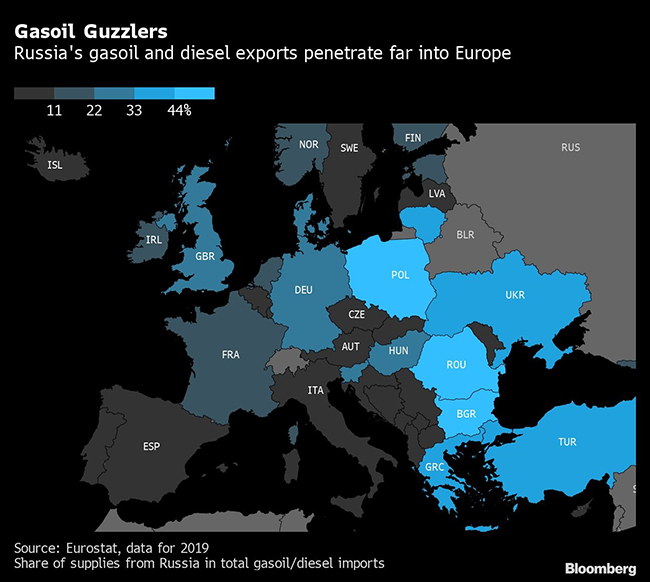 Supplies of the fuel are still flowing from Russian refineries to Europe but the trade is becoming more challenging. Shipping companies, banks and buyers are shying away from dealing with Russian energy products in what is being termed “self-sanctioning,” following the invasion.

“That will force Russian refiners to cut back, in fact we already see that,” Tornqvist said. “What does that mean? It means more crude oil will need to be exported instead of the products, and we believe that is not possible and will lead to cutbacks in Russian production.”

TotalEnergies SE will no longer sign or renew contracts to buy oil and petroleum products from Russia, with the aim to halt all purchases by the end 2022 at the latest, and has begun “gradual suspension” of Russian operations, the company said March 22 in a statement.

Diesel prices in Europe have surged in recent weeks. Earlier in March, futures jumped to a record as fears of supply disruption from Russia compounded an already tight market. Heating oil prices in Germany were up more than 50% week-on-week through March 14.

The situation is such that, in a rare reversal of normal trade flows, New York is sending two diesel cargoes to Europe even as regional inventories are at multiyear lows and prices hover close to record highs. The two tankers are carrying more than 700,000 barrels of diesel, according to Vortexa and Kpler, as well as shipping data compiled by Bloomberg.

The prevalence of diesel vehicles in Europe makes the continent particularly vulnerable to disrupted supply of the fuel, he said. “That systematic shortfall of diesel is there. In the past that’s been serviced by the Middle East, India or Russia, so we do think that it’s going to be challenging and prices are trying to encourage refiners to make diesel.”

“A lot of European refiners and buyers are self-sanctioning, regardless of whether there is an outright ban on energy or not,” said Amrita Sen, co-founder and director of research at Energy Aspects.

“Diesel, by far, is the worst affected” and with the loss of Russian barrels “at a time when across the oil market we’re at nearly record low stocks anyway, we are bound to see some really high prices.”