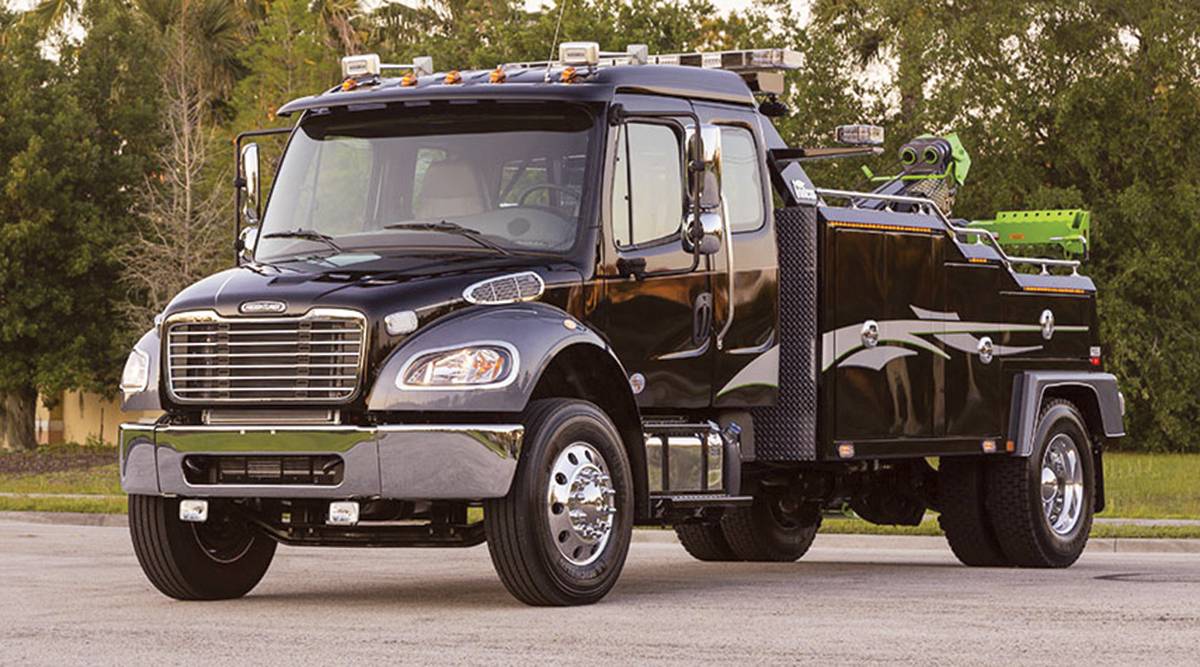 A Freightliner M2 106 tow truck. ETruck Transportation said it has one order for 200 converted trucks from a company in Chicago. (Freightliner)

ETruck Transportation announced a plan to take used, diesel-powered Class 6 models, only from Freightliner, and convert them to battery-electric power for customers with those specific trucks.

The Omaha, Neb.-based family-run company reported it already has one order for 200 of the converted trucks from a private company in Chicago it declined to identify, citing a nondisclosure agreement. Deliveries to that customer are scheduled to begin in early 2021.

“We are a niche. We are filling the need [now] for what everyone wants to get to, which could take [new truck manufacturers] five years,” eTruck Transportation President Russell Knudsen told Transport Topics. “All of our M2 Class 6 trucks will be box trucks for the e-commerce business. The  200 sold are box trucks, also.”

The company chose to focus solely on Freightliner, a brand of Daimler Trucks North America, because it has the highest volume of trucks in use, he said. “The customer is already there. They are not hard to find to acquaint them with [our product].” 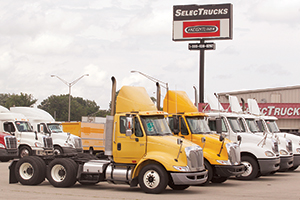 Used Freightliner trucks for sale on the SelecTrucks of Louisville dealership in Louisville, Ky. ETruck Transportation President Russell Knudsen said the company chose to convert Freightliner Class 6 trucks because of the high number of them in use. (John Sommers II for Transport Topics)

Besides that outreach, Knudsen said eTruck is considering a presence at a national truck show once those restart.

Knudsen said eTruck also has nondisclosure agreements with large U.S.-based major component suppliers, and they will be announcing their roles when the converted trucks begin to roll out into the market.

Battery packs will be located on the frame rails “on both sides, and those will vary depending on how many miles [fleets] want to go in a day,” he said.

The time it will take to convert each truck is estimated to be in the 40-hour range, he said. The initial intent is to train companies to make the conversion themselves.

“Send two trucks, four people for the week [to us]. We’ll get them trained, put two of their trucks together with them. We are only going to do one make and one model initially, and that way, every single truck will be the same,” Knudsen said. “We are not going to get phone calls every minute about this doesn’t work or this won’t fit. The [trucks and kits] are going to be identical.”

Meanwhile, eTruck customers will provide their own charging infrastructure. “We are not going to have a crisis format because on the Class 6, it is going to be an 8- to 10-hour use, out and back. They are not going to need to charge in between,” he said.

The potential customers eTruck has visited “are pretty much on everybody’s list for Class 8 [fleets],” he said — again declining to name them. “They are adding Class 6s. We have talked to those people and have been for a handful of years. They have just been watching us move ahead.”

He added eTruck has not been in touch with Freightliner because “we are not in their market; not building new trucks, and we are doing something to a used truck that I don’t see them ever doing. Why would they take their production away from new trucks?”

Knudsen said his family has lengthy experience in customizing, creating and marketing exotic passenger cars, vans and limousines, among other interests.

ETruck also is testing its approach on a Freightliner Cascadia model. “We have a Class 8 that is running in testing, but we put that on hold before the pandemic hit because of the [boom in] e-commerce,” Knudsen said.

An eTruck Transportation website is coming soon, he added.